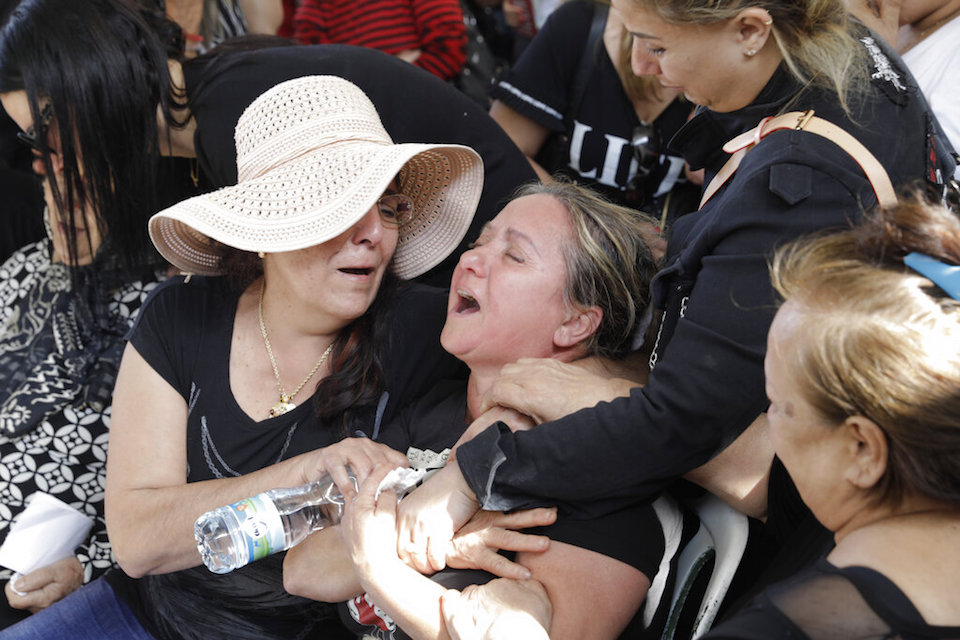 UPDATE: The Israeli army on Monday lifted protective restrictions on residents in southern Israel, while the Hamas militant group's radio station in the Gaza Strip reported a cease-fire, signaling a deal had been reached to end the bloodiest fighting between the two sides since a 2014 war.

There was no official cease-fire announcement from either side, but the intense fighting over the past two days appeared to come to a sudden halt in the early morning hours.

The Israeli military announced its decision, saying: "As of 7 a.m., all protective restrictions in the home front will be lifted."

Schools and roads had been closed, and residents had been encouraged to remain indoors and near bomb shelters as intense rocket fire pounded the area.

In Gaza, Hamas' Al-Aqsa radio station had a short item saying a cease-fire had been reached. However, neither the strip's Hamas rulers nor the smaller Islamic Jihad militant group that is active in Gaza issued any formal announcement.

JERUSALEM (AP)--Gaza militants fired hundreds of rockets into southern Israel on Sunday, killing at least four Israelis and bringing life to a standstill across the region in the bloodiest fighting since a 2014 war. As Israel pounded Gaza with airstrikes, the Palestinian death toll rose to 23, including two pregnant women and two babies.

The bloodshed marked the first Israeli fatalities from rocket fire since the 2014 war. With Palestinian militants threatening to send rockets deeper into Israel and Israeli reinforcements massing near the Gaza frontier, the fighting showed no signs of slowing down.

Israeli Prime Minister Benjamin Netanyahu spent most of the day huddled with his Security Cabinet. Late Sunday, the Cabinet instructed the army to "continue its attacks and to stand by" for further orders. Israel also claimed to have killed a Hamas commander involved in transferring Iranian funds to the group. 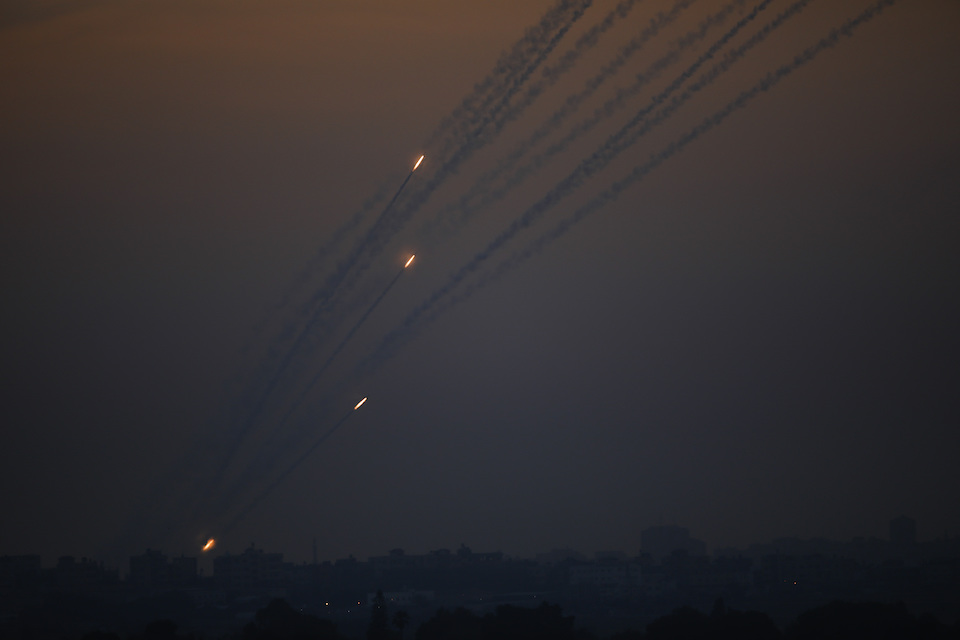 Rockets are launched from Gaza Strip to Israel, Sunday, May 5, 2019. Palestinian militants in the Gaza Strip on Sunday intensified a wave of rocket fire into southern Israel, striking towns and cities across the region while Israeli forces struck dozens of targets throughout Gaza, including militant sites that it said were concealed in homes or residential areas. (AP Photo/Ariel Schalit)

Israel and Hamas, an Islamic militant group that seeks Israel's destruction, have fought three wars since Hamas violently seized control of Gaza from Western-backed Palestinian forces in 2007. They have fought numerous smaller battles, most recently two rounds in March.

While lulls in fighting used to last for months or even years, these flare-ups have grown increasingly frequent as a desperate Hamas, weakened by a crippling Egyptian-Israeli blockade imposed 12 years ago, seeks to put pressure on Israel to ease the closure.

The blockade has ravaged Gaza's economy, and a year of Hamas-led protests along the Israeli frontier has yielded no tangible benefits. In March, Hamas faced several days of street protests over the dire conditions.

Hamas leader Ismail Haniyeh said in a statement late Sunday that the militant group was "not interested in a new war."

He signaled readiness to "return to the state of calm" if Israel stopped its attacks "and immediately starts implementing understandings about a dignified life."

With little to lose, Hamas appears to be trying to step up pressure on Netanyahu at a time when the Israeli leader is vulnerable on several fronts.

Fresh off an election victory, Netanyahu is now engaged in negotiations with his hard-line political partners on forming a governing coalition. If fighting drags on, the normally cautious Netanyahu could be weakened in his negotiations as his partners push for a tougher response.

Later this week, Israel marks Memorial Day, one of the most solemn days of the year, and its festive Independence Day. Next week, Israel is to host the Eurovision song contest. Prolonged fighting could overshadow these important occasions and deter foreign tourists.

The arrival of the Muslim holy month of Ramadan, which begins Monday, does not seem to be deterring Hamas.

But the group is also taking a big risk if it pushes too hard. During the 50-day war in 2014, Israel killed over 2,200 Palestinians, over half of them civilians, according to U.N. tallies, and caused widespread damage to homes and infrastructure. While Hamas is eager to burnish its credentials as a resistance group, the Gazan public has little stomach for another devastating war.

"Hamas is the change seeker," said retired Brig. Gen. Assaf Orion, a former head of the Israeli military general staff's strategic division. "Hamas needs to make its calculus, balancing its hope for improvement against its fear of escalation."

In Washington, U.S. Secretary of State Mike Pompeo said Israelis have "every right to defend themselves." He expressed hope that the recent cease-fire could be restored.

The U.N. Mideast envoy, Nickolay Mladenov, called for a halt in rocket fire and "a return to the understandings of the past few months before it is too late."

Previous rounds of fighting have all ended in informal Egyptian-mediated truces in which Israel pledged to ease the blockade while militants promised to halt rocket fire. Following a familiar pattern, the current round began with sporadic rocket fire amid Palestinian accusations that Israel was not keeping its promises to loosen the blockade.

Islamic Jihad threatened to strike deeper into Israel, saying it "is ready to engage in an open confrontation and can open a broader front to defend our land and people."

By Sunday, the Israeli military said militants had fired over 600 rockets, with the vast majority falling in open areas or intercepted by the Iron Dome rocket-defense system. But more than 30 rockets managed to strike urban areas, the army said.

Israeli officials said Moshe Agadi, a 58-year-old Israeli father of four, was fatally struck in the chest by shrapnel in a residential courtyard in the southern town of Ashkelon.

Israeli police said 66 people were wounded, three seriously. In Ashkelon, the Barzilai hospital itself was hit by debris from a rocket that was intercepted by an Iron Dome missile.

The Israeli deaths were the first rocket-related fatalities since the 2014 war, when 73 people, including six civilians, were killed on the Israeli side.

The Israeli military said it struck 250 targets in Gaza, including weapons storage, attack tunnels and rocket launching and production facilities. It also deployed tanks and infantry forces to the Gaza frontier, and put another brigade on standby.

"We have been given orders to prepare for a number of days of fighting under current conditions," said Lt. Col. Jonathan Conricus, a military spokesman.

Palestinian medical officials reported 23 dead, including at least eight militants hit in targeted airstrikes. At least four civilians, including two pregnant women and two babies, were also among the dead.

Late Saturday, the Palestinians said a 37-year-old pregnant woman and her 14-month-old niece were killed in an Israeli airstrike. The army denied involvement, saying they were killed by an errant Palestinian rocket. There was no way to reconcile the claims.

Among the militants who were killed was Hamas commander Hamed al-Khoudary, a money changer whom Israel said was a key player in transferring Iranian funds to the militant group.

Late Sunday, an Israeli airstrike hit an apartment building in northern Gaza, killing a couple in their early 30s and their 4-month-old daughter. A 12-year-old boy was also killed in northern Gaza.

Sirens wailed along Israel's border region throughout the day warning of incoming attacks. School was canceled and roads were closed. In Gaza, large explosions thundered across the blockaded enclave during the night as plumes of smoke rose into the air.

Hamas seized control of Gaza from the forces of internationally recognized Palestinian President Mahmoud Abbas. Despite his fierce rivalry with Hamas, Abbas appealed to the international community "to stop the Israeli aggression against our people."