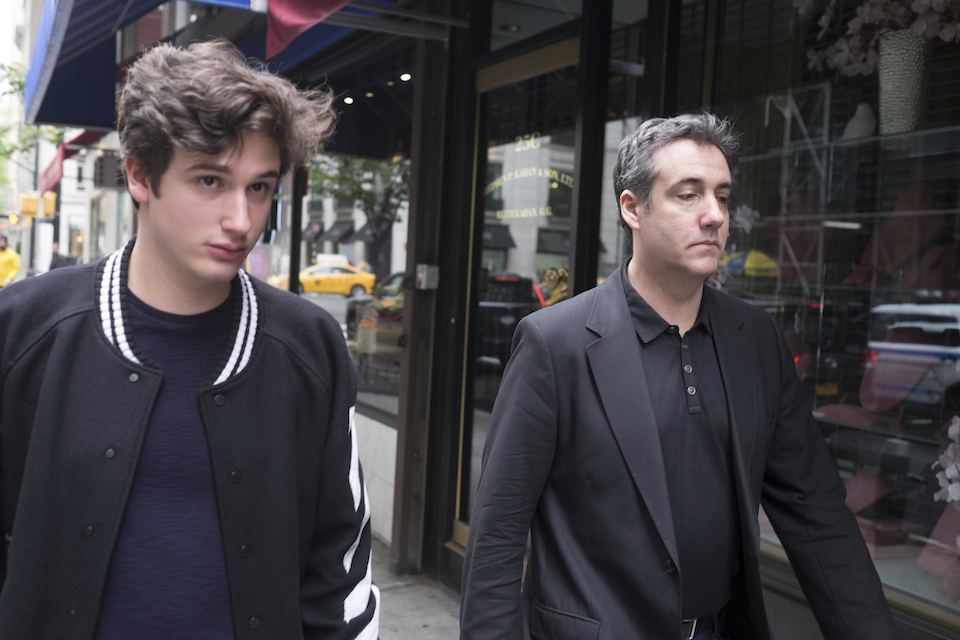 WASHINGTON (AP) — For months, President Donald Trump's former lawyer Michael Cohen tried — but failed — to position himself as a whistleblower in the vein of Watergate hero John Dean.

As the time ticked down toward his deadline to report to prison, Cohen also lost the interest of the one group of people who could help him out: the federal prosecutors he desperately hoped would ask a judge to shorten his sentence.

Since mid-March, prosecutors in New York have rebuffed Cohen's repeated offers to provide more information about alleged wrongdoing by Trump and other people in his orbit, Cohen's attorney Lanny Davis told The Associated Press on Friday.

"Why not see him?" Davis asked. "What's the downside? He's about to go to prison."

Cohen's legal team reached out to prosecutors in March asking for an opportunity to meet for a "frank discussion" about reducing his sentence, based on his cooperation. That meeting never happened.

That snub might be the best evidence yet that Cohen's months-long campaign to sell himself as a potential witness hasn't paid off.

Cohen is scheduled to report Monday to a federal prison 70 miles north of New York City to begin serving a three-year sentence for campaign-finance violations, tax evasion, bank fraud and lying to Congress.

In an apparent bid to maintain a semblance of normalcy before starting his sentence, Cohen left his Manhattan apartment building on Saturday with his son to go to a coffee shop and then to a barbershop, Eddie Arthur Salon. They both got haircuts. Cohen's next stop was the pricy retailer Barneys New York, where he told journalists that he plans to hold a news conference Monday before heading to prison.

Cohen started to cast himself publicly as a whistleblower less than three months after the FBI raided his home and apartment.

He gave a series of tantalizing teases that there was "more to come," starting with an interview last July in which he told ABC anchor George Stephanopoulos he was no longer loyal to Trump. More dribbled out over the next few weeks. Davis released a tape of Cohen and Trump discussing one of the hush-money payments.

That effort, though, has largely been met with an uncompromising approach by federal prosecutors.

New York investigators built their case for months without speaking with Cohen, then finally agreed to meet with him on a Saturday last August, just a few days before he would plead guilty.

At the meeting, they delivered an ultimatum: plead guilty or be indicted within days. Cohen also believed after the meeting that his wife could be charged with financial crimes if he didn't cooperate.

"I love this woman, and I am not going to let her get dragged into the mud of this crap," Cohen later told an acquaintance, the actor Tom Arnold, in a conversation that Arnold recorded and provided to The Wall Street Journal.

Cohen's wife, Laura, filed taxes with her husband and made investments with Cohen in taxi medallions. She ultimately was not charged.

After pleading guilty in August, Cohen did meet with Manhattan-based prosecutors multiple times to discuss several issues. Those included Trump's personal business dealings, the president's personal involvement in attempts to pay off McDougal and Daniels, and his inaugural committee, which is now the subject of a criminal investigation centering on possible donations by foreign nationals and influence peddling.

Cohen also met with special counsel Robert Mueller's investigators several times, culminating with a session just days before the former FBI director turned his report over to the Justice Department.

Still, the U.S. Attorney's Office in Manhattan, in court filings before his sentencing, criticized what it described as Cohen's unwillingness to cooperate fully and be debriefed "on other uncharged criminal conduct, if any, in his past."

They didn't ask the judge for a lenient sentence and have given no sign that they intend to file a so-called Rule 35 motion— a legal filing that could reduce Cohen's punishment if his cooperation is deemed to be of substantial assistance. Cohen's attorneys say they believe Cohen's information supports several potential prosecutions.

A spokesman for the U.S. Attorney's Office declined to comment.

In February, Cohen testified before several Congressional panels about what he said was dishonesty by Trump in his business affairs. He also testified that a Trump Organization executive, Allen Weisselberg, and Trump's son Donald Jr. were involved in reimbursing him for one of the hush money payments.

During that testimony, Cohen said a number of Trump-related topics were still being probed by New York prosecutors.

"I am currently working with them right now on several other issues of investigation that concerns them, that they're looking at," Cohen said.

Yet, within weeks, prosecutors were through speaking with him.

Davis, in the interview Friday, said he believes Cohen has been treated unfairly.

"The Southern District of New York was disproportionate in the sentence it asked for and appears to have targeted just Michael Cohen for reasons that I can't understand," Davis said.