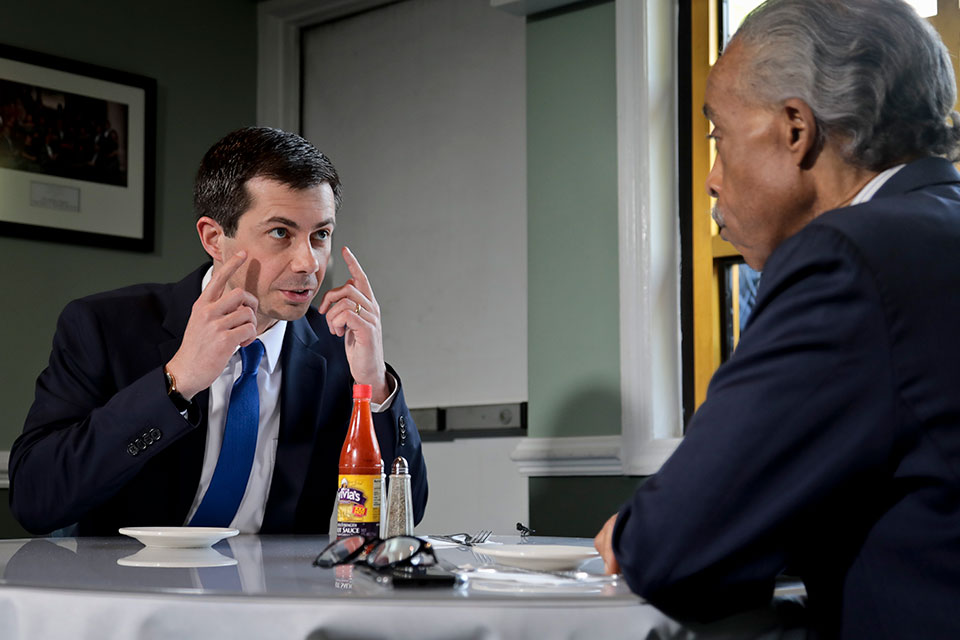 NEW YORK (AP) — From lunch with a civil rights leader in Harlem to meetings at a historically Black university in South Carolina, Democratic presidential candidate Pete Buttigieg is making a new, concerted effort to appeal to African American voters and put behind him criticism of his record on race.

"I know what I believe, I know what my values are, I've got policy ideas," the 37-year-old mayor of South Bend, Indiana said. "But I know I've got a lot to learn and I'm ready to make sure I'm understanding the concerns that are top of mind for the different audiences I speak to, to make sure what I have to say rhymes with what they're most concerned about."

The approach is aimed at addressing one of the biggest questions about Buttigieg's upstart campaign: Can he win over Black voters who are key to a Democratic victory in 2020?

As he's risen to the top tier of candidates in the crowded 2020 field, the growing crowds at Buttigieg's events have been overwhelmingly White. That included rallies with hundreds of people in South Carolina, where Black people make up the majority of Democratic voters, and at his campaign launch in South Bend, a community of roughly 100,000 people that's about 27% Black and 13% Hispanic.

Buttigieg's Record as Mayor of South Bend Under Scrutiny

Buttigieg also has faced growing scrutiny of his record leading the city since 2011. Critics, including many residents, have blasted him for firing the city's first Black police chief shortly after taking office, for prioritizing South Bend's downtown over its neighborhoods and for issues of housing, crime and inequality.

Buttigieg said Monday his campaign is now "working to broaden our coalition."

He had lunch at the iconic soul food restaurant Sylvia's with the Rev. Al Sharpton, the civil rights leader, who encouraged him "to engage with people who may not find their way to me who I need to go out and find my way in front of," Buttigieg said.

He'll spend May 5 and 6 in South Carolina, where he'll meet with African American leaders in Charleston and participate in a round-table discussion at South Carolina State University, the state's only public, historically Black university. A stop also is planned at a conference of clergy focused on equity and justice in Columbia. Buttigieg's campaign says he won't have a speaking role.

South Bend resident Bobbie Woods, whose son was shot and killed in 2003, was part of an anti-violence group Buttigieg created early in his first term in response to the rising number of murders in the city. Like many other Black residents, her opinion of the mayor is mixed.

The anti-violence initiative, which included face-to-face meetings between victims and inmates, gave offenders second chances but didn't do enough to help families and neighborhoods dealing with the trauma of violence, and who feel forgotten, she said. The revitalization of downtown was good for the city but needs to be extended to Black neighborhoods as well.

But the biggest lingering issue has been the firing of the police chief, whom Buttigieg said was under federal investigation for improperly recording several White officers' phone conversations. A police employee who heard the tapes described them as including "discriminatory racial comments."

"You had some people really angry about that, and who are still angry," Woods said of the firing. "I don't know if he can say enough or do enough to ever justify that."

How does Woods think Buttigieg would do as president?

"I think he will have good intentions," she said.

"Will he be able to make those come to pass is a good question."

Solomon Anderson, a banker from South Bend, said he didn't like what happened with the police chief but he likes what Buttigieg is doing with his hometown, and he believes the mayor has learned from his mistakes. He's leaning toward supporting Buttigieg in 2020, but still wants to hear more from him, as well as some other candidates.

"Irrespective of who's in office, no one is going to be everything to everybody," Anderson said. "I like how the city has moved forward. We're turning the page on a new era."

Buttigieg also has had to explain his use of the phrase "all lives matter" in the early days of the Black Lives Matter movement. He said at a meeting of Sharpton's National Action Network that he meant to show solidarity with the movement. He said he stopped using it when he realized it was seen by some as minimizing Black people's specific grievances, and that some who opposed the Black Lives Matter movement used it to antagonize supporters.

Charlene Carruthers, an activist from Chicago who helped form Black Youth Project 100, said she's troubled by Buttigieg's focus on data when making political decisions, including the signature project of his first years in office: Fixing or demolishing 1,000 vacant and abandoned properties in his first 1,000 days as mayor.

Buttigieg says the large number of vacant and abandoned homes was the main issue he heard from voters as he campaigned. But critics have said the process, particularly early on, was too aggressive and displaced some property owners who didn't have the money to quickly fix the homes.

"This is a politician who's driven by data.

"When I hear that, that automatically, for me, sends a red flag that they may not actually look at the people and the systemic issues that underlie the data," Carruthers said. "Being president of the United States and being mayor of a small-sized city, the impact is exponentially greater. Frankly, our people can't afford to deal with more mistakes from elected officials."

Buttigieg said he learned early on in his political career that "having good intentions is not enough and that things don't look the same depending on your life experience."

He said racial justice and quality are important to him, and he believes his easy re-election to a second term "was the result of a lot of listening, learning and willingness to adjust on things."

Buttigieg says he will speak in South Carolina about his agenda for America as a whole and Black Americans in particular, ranging from home ownership to health, criminal justice reform and voting rights.

"But I'm also there to listen, especially in this relatively early stage," he said.