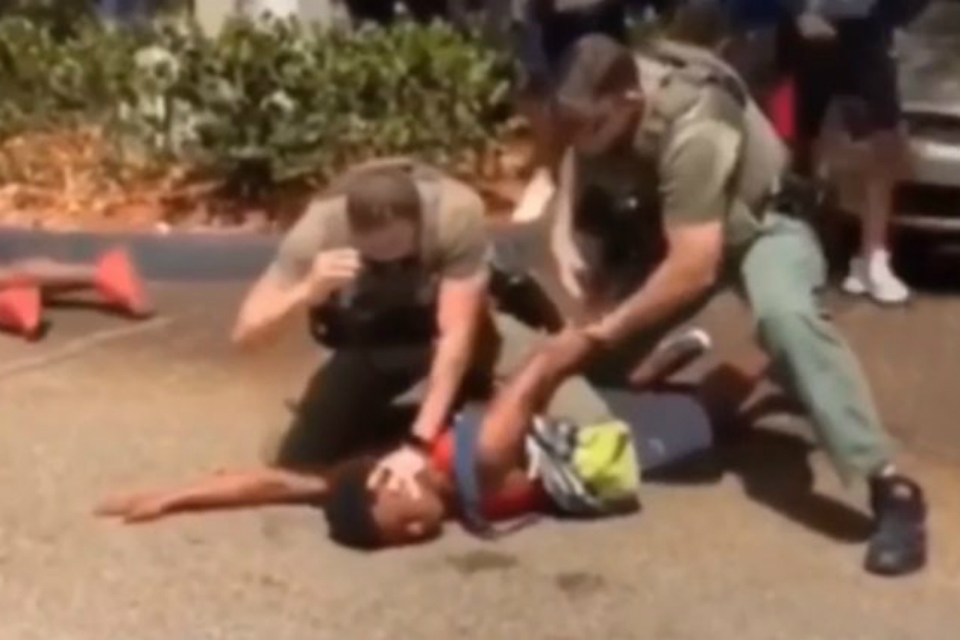 Stacy M. BrownThe Broward County Chapter of the NAACP will lead a march and rally to demand the termination and criminal prosecution of two Florida sheriff deputies who were caught on video punching a 15-year-old African American student and repeatedly slamming the child’s head against concrete pavement.

“In addition to reporting news, the NNPA, a trade association representing the 215 African American newspapers and media companies around the country, is also a voice for civil rights,” Chavis said.

Further, as the trusted source for news and information in the African American community, the NNPA should be at the forefront in informing its readers about all that affects them, Henry said.

“It’s important for us to remember where we came from and this is galvanizing and communicating on a level where we are all involved and this is such an important issue,” said Henry. “We need to realize that this concerns us, and we should not wait for the White media to tell us about our community and when something happens, they should be coming to us for that information,” he said.

Delucca “Lucca” Rolle, a student at J.P. Taravella High School, was accused of aggravated assault against an officer, but the charge made “no sense,” prosecutors said.

A cell phone video captured Broward County Sheriff’s deputies pepper-spraying, tackling and punching a group of teens last week outside a McDonald’s near the school.

The video shows deputies take Rolle down, with one deputy banging Rolle’s forehead into the pavement and punching him in the head, while another deputy helped restrain and handcuff him.

Rolle, one of two teens who were arrested, reportedly suffered a broken nose in the encounter.

Deputy Christopher Krickovich and Sgt. Greg LaCerra were both suspended by the Sheriff’s office after the video was released, though, originally, they were placed on restricted assignment.

The Broward State Attorney’s Office said it has begun investigating the deputies’ actions and prosecutors decided not to file charges against Rolle.

Crump noted that the two arrested teens are Black, while all three deputies seen in the cellphone video are White.

“Rolle was a teen beaten by deputies after he picked up a cellphone that fell out of the pocket of a Black boy who was being arrested,” Crump said.

“In response, the deputies “pepper-sprayed, brutally beat, and arrested him,” said Crump, who represented the family of Michael Brown, a 17-year-old African-American, who was shot and killed by police in Ferguson, Mo.

Crump also represented the family of Trayvon Martin, who in 2012 was killed by George Zimmerman, a White neighborhood watch volunteer in Sanford, Fla.

The encounter between Rolle and the deputies happened outside McDonald’s, a frequent after-school hangout spot.

At one point, Krickovich and LaCerra went to arrest a student — not Rolle — who had been warned not to trespass at the shopping center, according to a Sheriff’s report.

“Starting now, we will seek justice through every avenue possible for Lucca and his family. The actions on the video by the officers against Delucca are unconscionable,” said Crump.

Rolle’s supporters plan a peaceful rally Saturday afternoon at Hampton Pines Park in North Lauderdale, with attendees encouraged to wear red. Rolle was wearing a red shirt on the day of his arrest.

“We need to make sure we convey the message that the only crime committed on that day was not from the young man, the Black children that were there, but from the two deputies and the way they manhandled those kids,” said local NAACP President Marsha Ellison.

Police brutality and what we consider child abuse will not be tolerated, certainly with our kids who are equally as important as those in other communities.

“Police brutality and what we consider child abuse will not be tolerated, certainly with our kids who are equally as important as those in other communities,” Ellison said.

She’s also calling for the termination and prosecution of the deputies.

“We want the sheriff to hold them accountable and for them to be terminated, meaning they don’t have the opportunity to do this to anyone else while in a [sheriff’s] uniform,” Ellison said.

“We are wary of the state Attorney’s Office in their investigation. It could be one year sometimes two and they’ll try and wait until this dies down and close the case,” she said. “That’s not good enough. A suspension is not good enough. These children are traumatized, emotionally damaged. The 2020 election is coming where we get to choose a new sheriff and new states Attorney. We’re tired of this. Enough is enough.”