White Man Arrested in Fires at 3 Black Churches in Louisiana 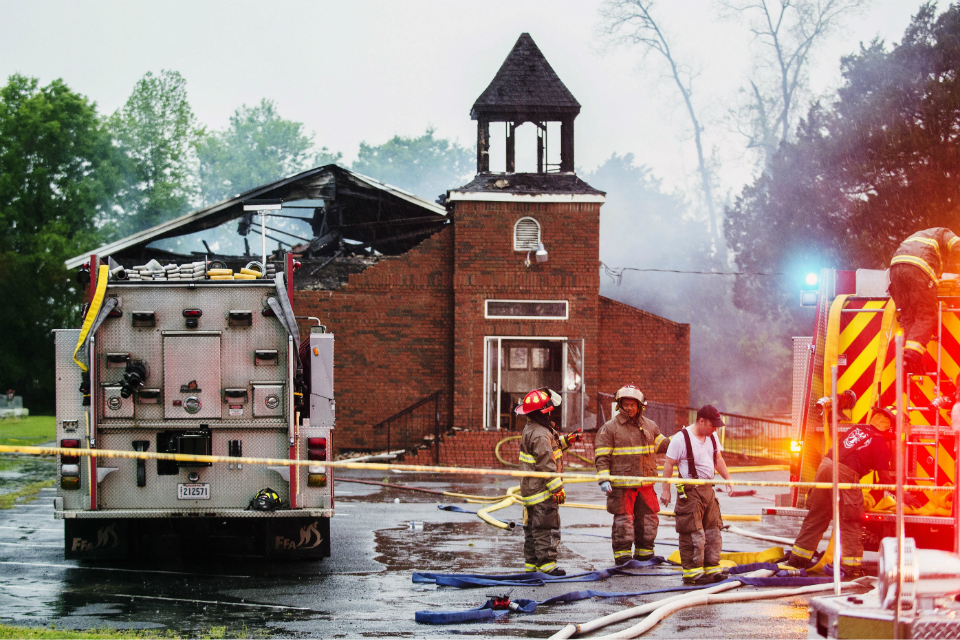 OPELOUSAS, La. (AP) — The suspect in a string of fires that destroyed three Black churches in rural Louisiana is the white son of a sheriff's deputy whose father helped arrange for his son's arrest, authorities said Thursday.

Holden Matthews, 21, faces arson charges in the connection with the blazes in and around Opelousas, a city of 16,000 where the flame-gutted remains of the buildings evoked memories of civil rights era violence.

Louisiana Fire Marshall Butch Browning offered no motive for the fires. He and other officials stopped short of calling them hate crimes. Eric Rommal, the agent in charge of the New Orleans FBI office, said investigators were still looking into whether the fires were "bias motivated."

Browning said there were no indications that anyone else was involved and the danger to churches was over.

"This community is safe again," Browning said at a news conference. "We are extremely, unequivocally confident that we have the person who is responsible for these tragic crimes."

The Rev. Harry Richard, pastor of Greater Union Baptist Church, which was destroyed, said the arrest put him at ease and let him sleep at night.

"I felt relieved my congregation didn't have to worry anymore," said Richard, who was told of the arrest late Wednesday. "I was reassured that law enforcement was on our side, that things were finally coming to an end."

A red gas can recovered at one of the churches was sold at Wal-Mart locations, and the company's investigators found that the same type of gas can, automotive cloths and a lighter were bought March 25 at a store in Opelousas. The debit card used in that purchase belonged to Matthews, according to court documents.

"The purchase time on this receipt is less than three hours before the first church fire was reported," an affidavit said.

In addition, cellphone tower data showed Matthews was in the area of all three fires. And surveillance video from businesses and homes near the churches and on the roads to and from each fire scene repeatedly showed a "light colored extended-cab truck" that was consistent with the beige pickup that belonged to Matthews' father. Matthews apparently drove the truck to buy the gas can and other items, according to the court documents.

St. Landry Parish Sheriff Bobby Guidroz confirmed that the suspect was the son of deputy Roy Matthews, whom he described as an excellent employee who knew nothing of his son's actions.

The elder Matthews was heartbroken when told his son was a suspect, the sheriff said.

"He broke down," Guidroz said. "It was hard." He said the father arranged for the son to leave the house and go to a place where he could be arrested without incident. He did not elaborate.

The younger Matthews was arrested on three counts of simple arson of a religious building. A conviction could bring up to 15 years in prison on each count, Browning said.

Gov. John Bel Edwards said the fires were "especially painful" because they were a reminder "of a very dark past of intimidation and fear."

Each church catered to an African American congregation in a rural setting, and each was rendered a charred disaster scene as a result of intense flames.

The fires set many people on edge in and around Opelousas, about 140 miles northwest of New Orleans.

"It's not a super tiny city," Brent Swann, a white, 24-year-old employee at a car rental agency said hours before the arrest. "But it's small enough to where a lot of people know each other, a lot of people go to these same churches together."

Matthews had shown interest in "black metal," an extreme subgenre of heavy metal linked, in some instances, to fires at Christian churches in Norway in the 1990s, Browning said.

A Facebook page that appeared to belong to Matthews showed him with the words "black metal" spray painted on a wall behind him. He also posted a comment on a movie's portrayal of black metal musician Varg Vikernes, a far-right figure convicted of manslaughter and arson at three churches.

The fires happened over a 10-day period. The first blaze torched the St. Mary Baptist Church on March 26 in Port Barre, a town just outside of Opelousas. Days later, the Greater Union Baptist Church and Mount Pleasant Baptist Church in Opelousas were burned. Each was more than 100 years old.

The churches were empty at the time, and no one was injured. Investigators with the Bureau of Alcohol, Tobacco, Firearms and Explosives were still combing the scene at Mount Pleasant and warning onlookers away on Wednesday, a week after the fire.

At Greater Union, which burned April 2, the flames caused exterior walls of brick and wood to collapse on rows of metal folding chairs. All that was left of an upright piano was the lattice work of steel strings.

"At this point, we're trying to head toward normal," Richard said Thursday. "Get back to where we were, if possible."