Immigrants Push for License to Drive 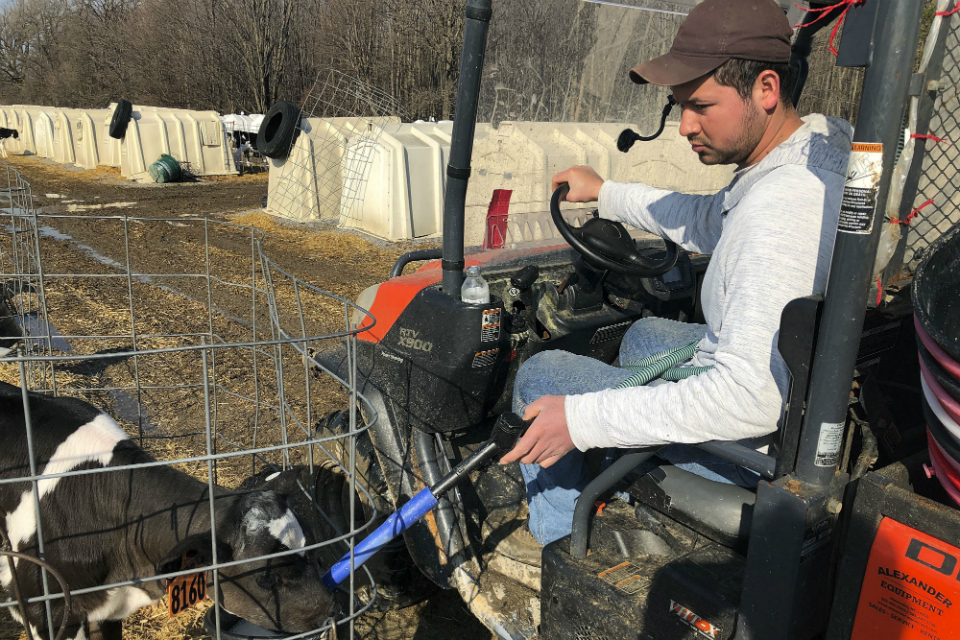 ALBION, N.Y. — Dairy farm worker Luis Jiménez gambles every time he drives without a license. Even a minor traffic stop could alert immigration agents that he is in the country illegally and lead to deportation.

But in the wide open spaces of upstate New York's farm country, supermarkets and job sites are often too far away for walking, there's not always somebody around to give you a ride, and catching a city bus or subway just isn't an option.

"Necessity forces us to take a risk," Jiménez said in Spanish as he drove home recently. "We have to work, we have to buy food. Sometimes we get sick and workers like me can't drive to a hospital, can't buy medicine. But I feel I need to take the risk so that my kids and my family can have a better life."

In New York and elsewhere, the idea of extending new privileges to those without legal immigration status has been resisted. But a renewed push across the country to allow them to get driver's licenses resonates strongly among those who make their living in the rural crop fields, dairy farms and fruit orchards where the need for everyday transportation can be the greatest.

Apple orchard worker Eladio Beltran, who is facing deportation after a traffic stop, says licenses also could alleviate the constant fear workers like him live under.

"We don't feel safe," Beltran said. "If you are in a vehicle and you see a cop, you know any time he can turn his lights on. And you end up arrested; you end up in Mexico."

Immigrants and their advocates have already gotten access to such licenses in a dozen states including California, Colorado and Illinois, some of them accepting state tax returns as identification. They are now targeting roughly a half-dozen states where they see a friendlier political landscape this year. They include Wisconsin and New Jersey, where Democratic governors succeeded Republicans, and New York, where Democrats now are in total control of the Legislature.

This spring Oregon legislators are considering HB 2015 or the Equal Access to Roads Act, which would eliminate the requirement that an individual must provide proof of legal presence to be issued a noncommercial driver license. HB 2015 is currently scheduled to have a public hearing before the Joint Committee on Transportation on April 17, according to Rep. Diego Hernandez (D-Portland).

“Without access to a license to drive, many immigrants without legal status are put in an impossible position: either choose to drive without a license, risking arrest and deportation, or choose not to drive and be unable to provide for themselves and their family. Since 2016, deportations over traffic stops have increased by 138%,” said Iván Hernández, communications manager for Causa Oregon, the advocacy group that filed the bill, in a quote submitted to The Skanner.

"Now there's a new urgency to really try to get this done, and there is new political opportunity," said Christine Neumann-Ortiz, executive director of Voces de la Frontera, an immigrant advocacy group based in Milwaukee.

The laws could give state-level protection to immigrants who fear more aggressive enforcement by federal immigration agents under the Trump administration. Bolstering those fears is the impending departure, announced over the weekend, of Homeland Security Secretary Kirstjen Nielsen , who had been viewed as resistant to some of the harshest immigration measures supported by Trump and his aides.

Advocates say police would still be able to view drivers' past infractions, but they say immigrants producing a valid license will be less likely to face further questions and contact with federal agents.

In New York, farmworkers make up only about 10,000 of the estimated 265,000 immigrants without legal documents expected to get driver's licenses, according to the Fiscal Policy Institute. But they might get the most use out of licenses.

Ismael Castellanos is driven a mile daily from the home he shares with four other immigrant workers to the dairy farm where he cares for calves. Trips for a carton of milk or a dozen eggs can be more problematic, and pricey. The nearest grocery store is 8 miles away, and he pays people with cars between $30 and $40 per trip.

"You have to call the person and ask which afternoon he has off so he can drive you, so you do grocery shopping that day," Castellanos said in Spanish.

Castellanos, Beltran and Jiménez spoke to The Associated Press on the condition that names of the farms where they work are not disclosed. They are part of a group called Alianza Agricola, which is lobbying for the license law in New York.

It's unclear whether attitudes have changed much in New York since 2007, when then-Gov. Eliot Spitzer attempted to adopt such a license measure but was forced to back off amid withering political opposition. A poll from Siena College last month found New York residents still opposing the idea by almost 2 to 1.

"If they want to stay here, then they should become citizens," Jordan said. "We have a system in our country. And it's there for a reason. And so just follow the system and be here legally, and that's the answer to all of it."

Advocates say the bill will help the state, as well as immigrants, thanks in part to additional revenue from car registrations and sales taxes. As immigrants register cars, they will buy insurance. They also point to a study that found states with license laws average lower traffic fatality rates, presumably because the immigrant drivers have passed state-administered driving exams.

"Not only does it protect the undocumented immigrant farmer who is harvesting our products, our agricultural products, but it protects society as a whole," said sponsoring state Sen. Luis Sepulveda, a Bronx Democrat.

Beltran said he faced possible deportation after being stopped for speeding in 2014 as he was driving to buy bronchitis medicine for one of his daughters. The local police notified Immigration and Customs Enforcement, which said it administratively halted his immigration proceedings in 2016 on humanitarian grounds.

Then in 2017, local police stopped him for driving the wrong way down a one-way street, according to federal officials. Beltran said he was driving to a gas station in an unfamiliar town. Police called Customs and Border Patrol officers, who arrested Beltran because of his reentry after a 2008 deportation. His immigration case was reopened, leading to a hearing in Buffalo next month.

The 32-year-old father of four continues to work, but the hearing is on his mind. On a recent cool spring morning, he trimmed a neat row of apple trees, knowing he might not see them bear fruit.

"I am working today but days go by fast. Will I go back to my family after entering immigration court?" he said. "If I get deported, when will I see them again?"