Dems Cry Foul as Trump Calls for Striking Down 'Obamacare' 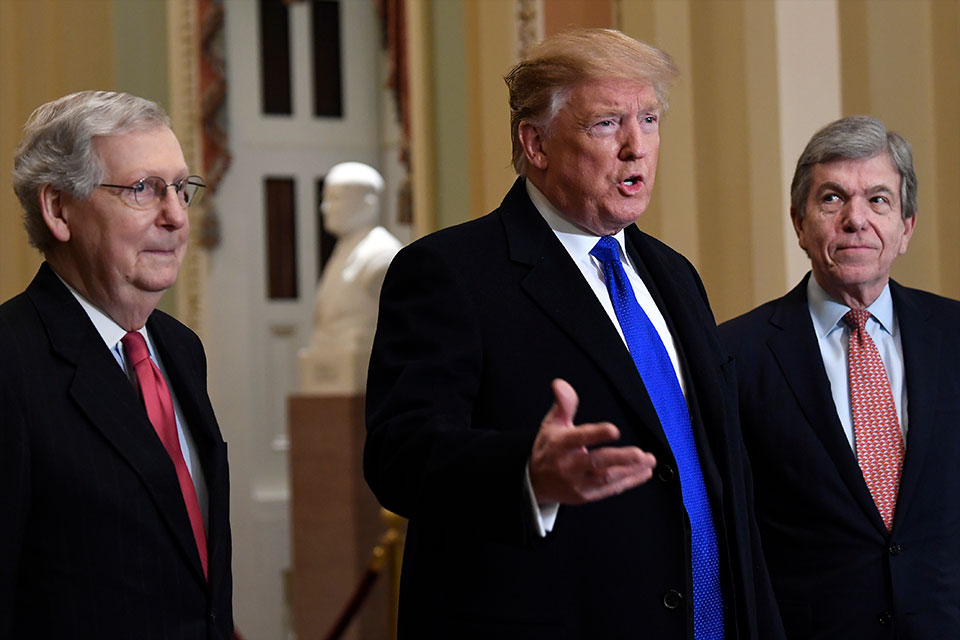 WASHINGTON (AP) — The Trump administration has told a federal appeals court it wants the entire Affordable Care Act struck down, an outcome that could leave millions uninsured and re-ignite a winning political issue for Democrats.

The administration, in a terse filing Monday with the court in New Orleans, said it agrees that former President Barack Obama's health care law should be declared unconstitutional after Congress repealed one part of it — unpopular fines on people who remain uninsured.

That position is at odds with previous statements by leading congressional Republicans who said they did not intend to repeal other parts of the law when they cut out its fines, effective this year. It's also a departure from the administration's earlier stance in a lower court, where it had argued that only federal protections for people with pre-existing medical conditions and limits on premiums charged to older, sicker people should be struck down.

House Speaker Nancy Pelosi said the turnabout shows that Republicans "say one thing and they do another."

Democrats have been casting about for a message after Special Counsel Robert Mueller found no conspiracy between candidate Donald Trump and the Russian government to sway the 2016 election.

"This is actually an opportunity for us to speak to the American people with clarity," Pelosi said. "Republicans did say during the campaign that they weren't there to undermine the pre-existing condition benefit."

"Then they go to court to strip it and strip the whole bill," she continued. If the entire ACA is repealed, popular provisions such as coverage for adult children on parental insurance until age 26 would go, Pelosi said.

Seeming to react to the pushback, Trump said on Twitter, "The Republican Party will become "The Party of Healthcare!"

Your administration JUST said it wants to get rid of the entire ACA, end protections for preexisting conditions, and strip health care from 30 MILLION Americans. Are you sure you want to brag about health care right now? https://t.co/rhp5sRP27u

As president-elect, Trump promised "insurance for everybody," but the White House never presented a comprehensive plan.

The Justice Department did not explain its reasoning in a two-sentence letter to the court, but promised a full and timely explanation for the appeals judges. It's rare for Justice to decline to defend a federal law.

The case brought by Texas and a group of GOP-led states seems headed for the Supreme Court. District Court Judge Reed O'Connor in Fort Worth earlier ruled in favor of the plaintiff states, and Democratic-led states have appealed to the 5th U.S. Circuit Court of Appeals in New Orleans.

The Supreme Court has twice upheld the Obama-era law. Five justices — a majority — who upheld the law in 2012 are still on the bench. They are Chief Justice John Roberts and the court's four liberals.

Repeal of the ACA in its entirety would risk making more than 20 million people uninsured. That includes some 12 million low-income people covered through its Medicaid expansion, and some 11 million purchasing subsidized private health insurance through HealthCare.gov and state-run insurance markets.

Some Republicans say that wouldn't happen because the Trump administration's "repeal and replace" plan would send grants to states for them to run their own health insurance programs.

However, during the 2017 congressional debate over repealing the health law, the nonpartisan Congressional Budget Office estimated the GOP replacement plans would result in steep coverage losses.

Trump as president has never given up on repealing "Obamacare," and is still complaining about the vote by the late GOP Sen. John McCain of Arizona that saved the law. The latest Trump budget also calls for repeal. But that possibility was foreclosed when Democrats won control of the House in last year's midterm elections.

Judge O'Connor's ruling rests on a legal analysis that the congressionally repealed fines for going uninsured are central to the law. O'Connor noted that the Supreme Court upheld the law in 2012 because its requirement for Americans to carry health insurance was enforced through fines levied as taxes, which passed constitutional muster.

But California Attorney General Xavier Becerra, heading up the Democratic state officials defending the law, says that view strains the meaning of underlying federal laws and the clear intent of many Republican lawmakers who voted to repeal the ACA's fines.

Signed nearly 10 years ago, the health law remains in place while the lawsuit continues. House Democrats, meanwhile, are unveiling broad legislation on Tuesday to shore up the Affordable Care Act and expand enrollment to millions more people.

Mark Sherman contributed to this report.