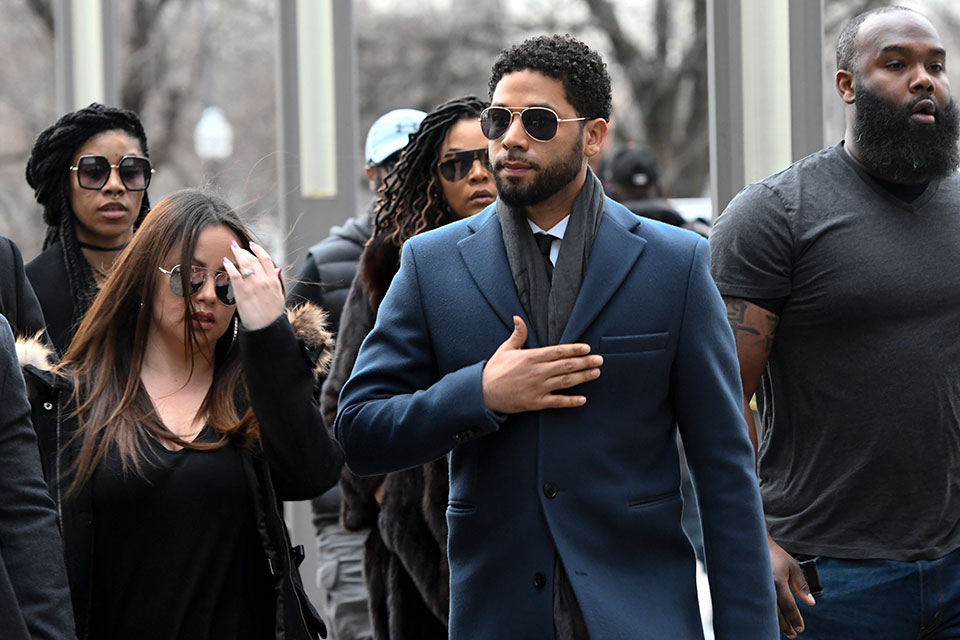 CHICAGO (AP) — Attorneys for "Empire" actor Jussie Smollett said Tuesday that charges alleging he lied to police about a racist and homophobic attack have been dropped. (Updates on this story are lower on the page.)

Smollett attorneys Tina Glandian and Patricia Brown Holmes said in a statement that Smollett's record "has been wiped clean." Smollett was indicted on 16 felony counts related to making a false report that he was attacked by two men.

Police and prosecutors have said the Black and gay actor falsely reported to authorities that he was attacked around 2 a.m. on Jan. 29 in downtown Chicago because he was unhappy with his pay on the Fox show and to promote his career.

Smollett, who is Black and gay, plays the gay character Jamal Lyon on the hit Fox TV show that follows a Black family as they navigate the ups and downs of the recording industry.

Smollett reported that he had been attacked on his way home from a sandwich shop. Smollett said two masked men shouted racial and anti-gay slurs, poured bleach on him, beat him and looped a rope around his neck. He claimed they shouted, "This is MAGA country" — a reference to President Donald Trump's "Make America Great Again" campaign slogan. He asserted that he could see one of the men was White because he could see the skin around his eyes.

The men are brothers Abimbola "Abel" and Olabinjo "Ola" Osundairo, and one of them had worked on "Empire." An attorney for them has said the brothers agreed to help Smollett because of their friendship with him and the sense that he was helping their careers.

Police have also said that before the attack, Smollett sent a letter that threatened him to the Chicago studio where "Empire" is shot. The FBI, which is investigating that letter, has declined to comment on the investigation.

"Empire" actor Jussie Smollett says he's "been truthful and consistent on every single level since day one."

Attorneys for Smollett said Tuesday that all charges alleging he lied to police about attack have been dropped.

Smollett had faced 16 felony counts alleging he lied to police about a racial and homophobic attack against him in January.

The statement said, "After reviewing all of the facts and circumstances of the case, including Mr. Smollett's volunteer service in the community and agreement to forfeit his bond to the City of Chicago, we believe this outcome is a just disposition and appropriate resolution to this case."

Smollett had made a $10,000 bond payment to the city to get out of jail after his arrest on the charges.

Chicago Mayor Rahm Emanuel and the city's police chief have angrily criticized Jussie Smollett and the decision by prosecutors to drop all charges that alleged the "Empire" actor staged a racial and homophobic attack in the city in January.

Speaking to reporters Tuesday, a visibly angry Emanuel called the decision a "whitewash of justice" and asked, "Where is the accountability in the system?"

Emanuel criticized Smollett for not taking any responsibility despite what he described as overwhelming evidence. He also says Smollett continues to drag Chicago's reputation through "the mud."

His voice seeming to quiver with anger he said about Smollett, "Is there no decency in this man?"

Smollett has not backtracked from his original story, insisting he'd been "truthful and consistent on every single level since day one."