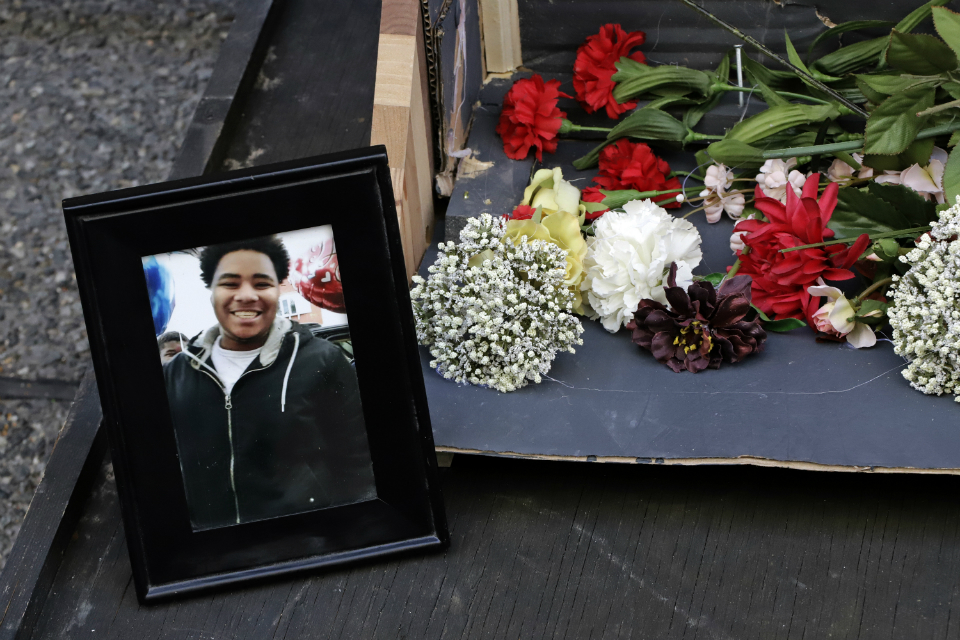 PITTSBURGH (AP) — The defense rested its case Friday in the homicide trial of a white police officer charged with shooting and killing an unarmed black teenager near Pittsburgh, signaling the jury will soon get the case.

Former East Pittsburgh Police Officer Michael Rosfeld is charged with homicide in the death of 17-year-old Antwon Rose II last summer. Rosfeld shot Rose in the back, arm and side of the face as he fled. The former officer told a jury he thought Rose or another suspect had a gun.

The jury was set to hear closing arguments Friday afternoon, the fourth day of the trial, and then begin deliberating.

"We believe the jury has enough information to arrive at the right conclusion: that Antwon Rose was murdered," the family's attorney, S. Lee Merritt, told The Associated Press in a courthouse hallway. Merritt said "it's pretty obvious" Rose was not a threat to Rosfeld.

Rosfeld, 30, fired three bullets into Rose after pulling over an unlicensed taxi that had been used in a drive-by shooting. Rosfeld ordered the driver to the ground, but Rose and another passenger got out and began running away.

Jurors saw video of the fatal confrontation, which showed Rose falling to the ground after being hit.

Under cross-examination, Jobe agreed with Assistant District Attorney Jonathan Fodi that a police officer can lie, violate the law or be unreasonable. He also agreed with the prosecutor that in some circumstances, it is reasonable to refrain from shooting or to disengage from a situation.

But Jobe said that Rosfeld was within his rights to use "deadly force" to stop fleeing suspects he thought had been involved in a shooting.

"What did Michael Rosfeld do wrong on June the 19th?" asked Rosfeld's attorney, Patrick Thomassey. "I don't think he did anything wrong. He was following his training," Jobe replied.

Rosfeld testified Thursday that he thought Rose or the other passenger had pointed a weapon at him. Neither teen had a gun on him at the time, though two guns were later found in the car.

"It happened very quickly," Rosfeld said. "My intent was to end the threat that was made against me."

Prosecutors say Rosfeld gave inconsistent statements about the shooting, including whether he thought Rose was armed.

Prosecutors charged Rosfeld with an open count of homicide, meaning the jury can convict him of murder or manslaughter. The defense asked Judge Alexander Bicket on Friday to acquit Rosfeld of all charges, but the judge declined.

One juror, a white woman who had taken copious notes, was dismissed from the panel Friday and replaced with a white man. No reason was given for her dismissal. The jury now consists of seven men and five women. There are three black jurors.

Also Friday, Bicket lifted a gag order he imposed on the parties in the case. Thomassey made the request, saying that while he and prosecutors had abided by the judge's order, the attorney for Rose's family had not. On Wednesday, Merritt released a letter to the media that Rose's mother wrote to prosecutors urging them to show what a "kind, loving and funny" person her son was.

Rose had been riding in the front seat of the cab when another occupant, Zaijuan Hester, in the back, rolled down a window and shot at two men on the street, hitting one in the abdomen. A few minutes later, Rosfeld spotted their car, which had its rear windshield shot out, and pulled it over.

Hester, 18, pleaded guilty last week to aggravated assault and firearms violations. Hester told a judge that he, not Rose, did the shooting.