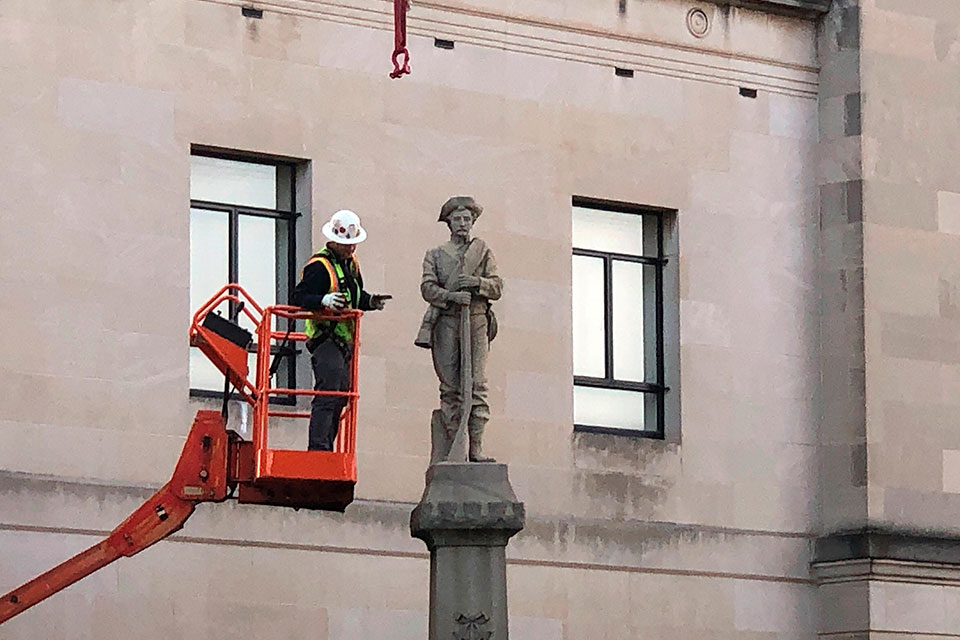 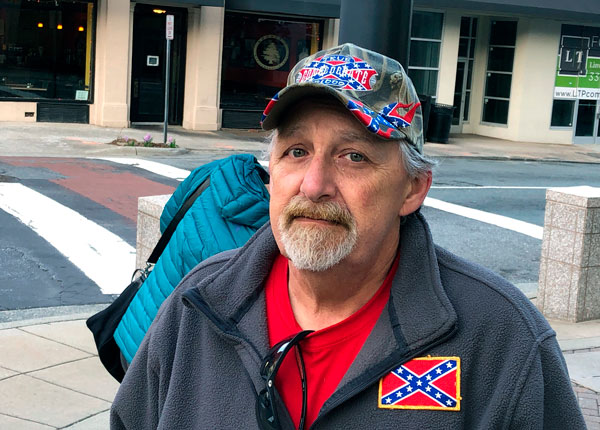 Howard Snow stands across from a Confederate statue in downtown Tuesday, March 12, 2019, in Winston-Salem, N.C. Snow says the city is wasting money by taking the statue down and that the money can be put to better use. Crews began removing the statue Sunday from the grounds of an old courthouse. (AP Photo/Tom Foreman Jr.)WINSTON-SALEM, N.C. (AP) — A North Carolina city removed a Confederate statue Tuesday from the grounds of an old courthouse, a rare move in a state where such monuments are largely protected by law.

Construction crews in Winston-Salem spent more than an hour attaching a harness and a cage-like metal frame to protect the statue of an anonymous soldier, then hoisted it from atop its pedestal with a large crane. A small group of onlookers clapped and cheered as the statue was taken down and placed on a flatbed truck.

Winston-Salem Mayor Allen Joines said in a phone interview that he hoped work to remove the pedestal and base would be finished by the end of the day. Joines said the statue will eventually be moved to historic Salem Cemetery. Before that, it will be put into temporary storage while a site at the cemetery is prepared.

"We realize that there are very strong feelings on both sides of this issue, so what we've tried to do is devise a solution that recognizes both sides," he said, describing its eventual home in the cemetery as "a very dignified and appropriate location for the statue."

Wearing a jacket and hat with Confederate symbols, Howard Snow came to watch from across the street. He said the city was wasting money by taking the statue down and that the money could be put to better use.

Winston-Salem had more leeway than most North Carolina cities because the old courthouse property had passed into private hands. A 2015 North Carolina law all but prohibits the permanent removal of Confederate statues from public land.

In January, a judge denied a request by the United Daughters of The Confederacy to prevent the removal of the Winston-Salem statue. City officials had given the group until the end of that month to move the statue from the grounds of the building that now houses apartments, or the city would take action.

The approximately 30-foot (9-meter) high monument includes a granite statue atop a base and column and was dedicated in 1905. It depicts an anonymous soldier in a Confederate uniform resting his rifle stock against the ground.

North Carolina has been at the forefront of the debate over what to do with Confederate monuments as one of three southern states with the most statues, according to the Southern Poverty Law Center. A state tally shows Confederate monuments are located at contemporary or historic courthouses in about half of the state's counties.

The United Daughters of The Confederacy unsuccessfully argued in court papers that the sale of the Winston-Salem courthouse left the public monuments in the hands of Forsyth County, so removal would violate the state law. But county officials have said they don't own the statue and the current owner of the property agreed the statue should be removed.

City officials have said it's impossible to preserve the monument or protect public safety at the downtown location. The statue has been vandalized several times in recent years, and critics and supporters have rallied around it.

Elsewhere, some statues had been relocated by North Carolina cities in the years before the 2015 law went into effect, but since then, local governments have been all but blocked from doing so under the law that allows relocation only in very narrow circumstances.

Two North Carolina Confederate statues have been torn down by protesters, including one at a historic Durham courthouse and another on the campus of the University of North Carolina at Chapel Hill.

Critics argue many Confederate statues were built decades after the Civil War to promote White supremacy. Supporters counter that the monuments are simply memorials to ancestors who fought and died protecting their homes.

The Southern Poverty Law Center said 115 Confederate statues have been taken down across the U.S., a sign that they are losing favor.