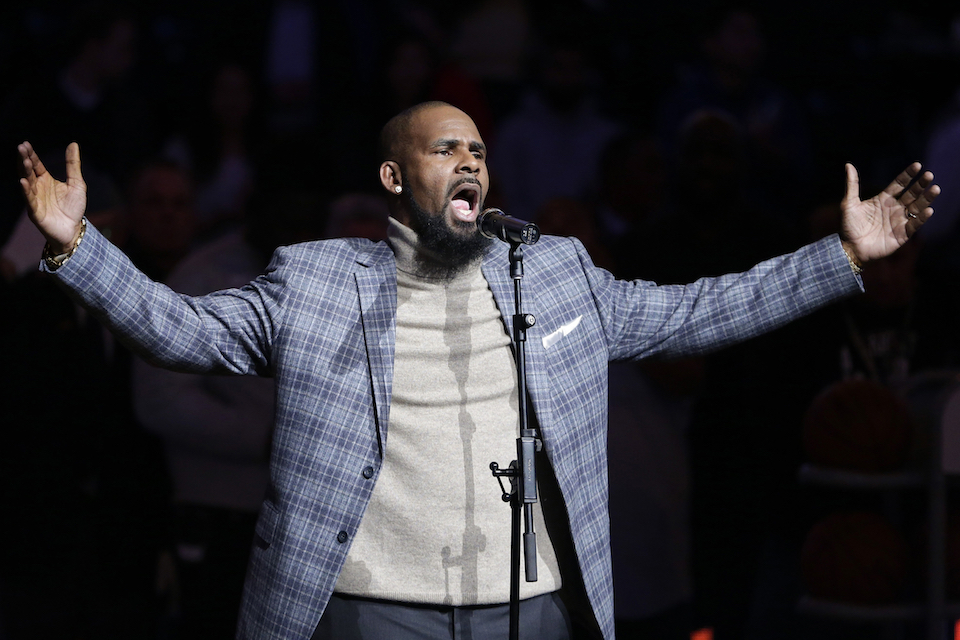 CHICAGO (AP) — R. Kelly, the R&B star who has been trailed for decades by allegations that he violated underage girls and women and held some as virtual slaves, was charged Friday with aggravated sexual abuse involving four victims, including at least three between the ages of 13 and 17.

In a brief appearance before reporters, Cook County State's Attorney's Kim Foxx announced the 10 counts against the 52-year-old Grammy winner. She said the abuse dated back as far as 1998 and spanned more than a decade. She did not comment on the charges or take questions.

At 5:15 p.m. R. Kelly's attorney said the singer is "shell-shocked" by the aggravated sexual abuse indictment against him and plans to turn himself in to authorities Friday night.

Steve Greenberg told The Associated Press that his client is "extraordinarily disappointed and depressed" by the 10 counts Chicago prosecutors filed against him.

Greenberg said he had offered to sit down with prosecutors before charges were filed to discuss "why these charges are baseless." But they refused, he said.

He said Kelly maintains his innocence and looks forward to being acquitted at trial. 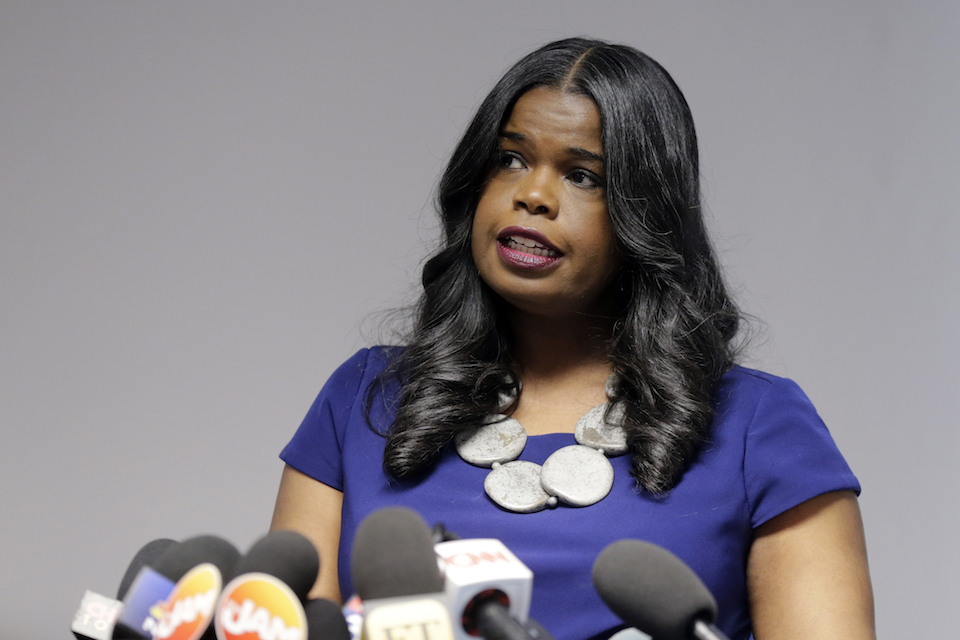 Cook County State's Attorney Kim Foxx speaks at a news conference, Friday, Feb. 22, 2019, in Chicago. R. Kelly, the R&B star who has been trailed for decades by lurid rumors, was charged with 10 counts of aggravated sexual abuse involving multiple victims. After the latest documentary Foxx, said she was "sickened" by the allegations and asked potential victims to come forward. (AP Photo/Kiichiro Sato)

The singer, who has consistently denied any sexual misconduct, was to appear in court Saturday.

It was not immediately clear if the charges were connected to that video, which Avenatti said includes audio in which Kelly and the girl say several times that she is 14 years old.

Avenatti said the charges marked "a watershed moment in the 25 years of abuse" by Kelly and that he believes more than 10 other people associated with Kelly should be charged as "enablers."

In 2008, a jury acquitted Kelly of child pornography charges over a graphic video that prosecutors said showed him having sex with a girl as young as 13.

He and the young woman allegedly depicted with him denied they were in the 27-minute video, even though the picture quality was good and witnesses testified it was them, and she did not take the stand. Kelly could have gotten 15 years in prison.

Charging Kelly now with sexual assault for actions that occurred in the same time frame as the allegations from the 2008 trial suggests the accusers are cooperating this time and willing to testify.

Because the alleged victim 10 years ago denied that she was on the video and did not testify, the state's attorney office had little recourse except to charge the lesser offense under Illinois law, child pornography, which requires a lower standard of evidence.

Each count carries up to seven years in prison. If Kelly is convicted on all 10 counts, a judge could decide that the sentences run one after the other — making it possible for him to receive up to 70 years behind bars. Probation is also an option under the statute. 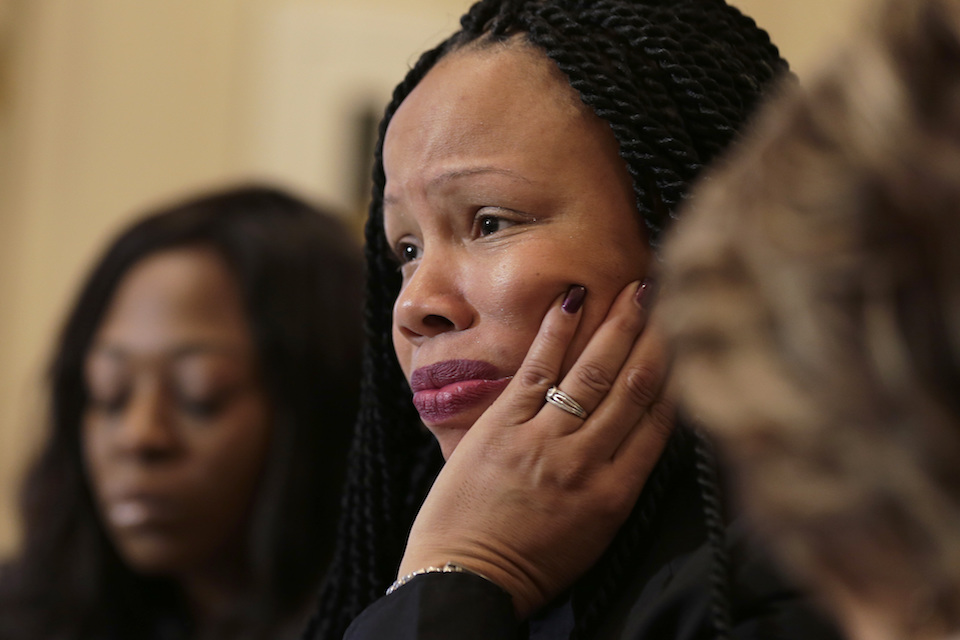 Rochelle Washington, left, and attorney Gloria Allred, right, look on Latresa Scaff speaks during a news conference in New York, Thursday, Feb. 21, 2019. Scaff and Washington are accusing musician R. Kelly of sexual misconduct on the night they attended his concert when they were teenagers.(AP Photo/Seth Wenig)

Legally and professionally, the walls began closing in on Kelly after the release of a BBC documentary about him last year and the multipart Lifetime documentary "Surviving R. Kelly," which aired last month. Together they detailed allegations he was holding women against their will and running a "sex cult."

After the latest documentary, Foxx said she was "sickened" by the allegations and asked potential victims to come forward.

#MeToo activists and a social media movement using the hashtag #MuteRKelly called on streaming services to drop Kelly's music and promoters not to book any more concerts. Protesters demonstrated outside Kelly's Chicago studio.

As recently as Thursday, two women said that Kelly picked them out of a crowd at a Baltimore after-party in the mid-1990s when they were underage and had sex with one of the teens when she was under the influence of marijuana and alcohol and could not consent.

In the indictment, the prosecution addresses the question of the statute of limitations, which is likely to be raised by the defense. It describes how prosecutors can charge Kelly under Illinois law even though the alleged crimes occurred as much as two decades ago.

The indictment says in at least one instance, the abuse of a minor occurred between 1998 and 1999 but that it clearly fell within the 20-year charging window allowed under Illinois law. The 20-year period only begins, it says, after a victim turns 18.

Greenberg said earlier this year that his client was the victim of a TV hit piece and that Kelly "never knowingly had sex with an underage woman, he never forced anyone to do anything, he never held anyone captive, he never abused anyone."

Avenatti said his office was retained last April by people regarding allegations of sexual assault of minors by Kelly. He said the video surfaced during a 10-month investigation. He told the AP that the person who provided the VHS tape knew both Kelly and the female in the video.

The singer and songwriter, whose legal name is Robert Kelly, rose from poverty on Chicago's South Side and has retained a sizable following, despite the accusations. He has written numerous hits for himself and other artists, including Celine Dion, Michael Jackson and Lady Gaga. His collaborators have included Jay-Z and Usher.

Kelly broke into the R&B scene in 1993 with his first solo album, "12 Play," which produced such popular sex-themed songs as "Bump N' Grind" and "Your Body's Callin'."

Months after those successes, the then-27-year-old Kelly faced allegations he married 15-year-old Aaliyah, the R&B star who later died in a plane crash in the Bahamas. Kelly was the lead songwriter and producer of Aaliyah's 1994 debut album.

Kelly and Aaliyah never confirmed the marriage, though Vibe magazine published a copy of the purported marriage license. Court documents later obtained by the Chicago Sun-Times showed Aaliyah admitted lying about her age on the license.

Jim DeRogatis, a longtime music critic for the Chicago Sun-Times, played a key role in drawing the attention of law enforcement to Kelly. In 2002, he received the sex tape in the mail that was central to Kelly's 2008 trial. He turned it over to prosecutors. In 2017, DeRogatis wrote a story for BuzzFeed about the allegations Kelly was holding women against their will in Georgia.