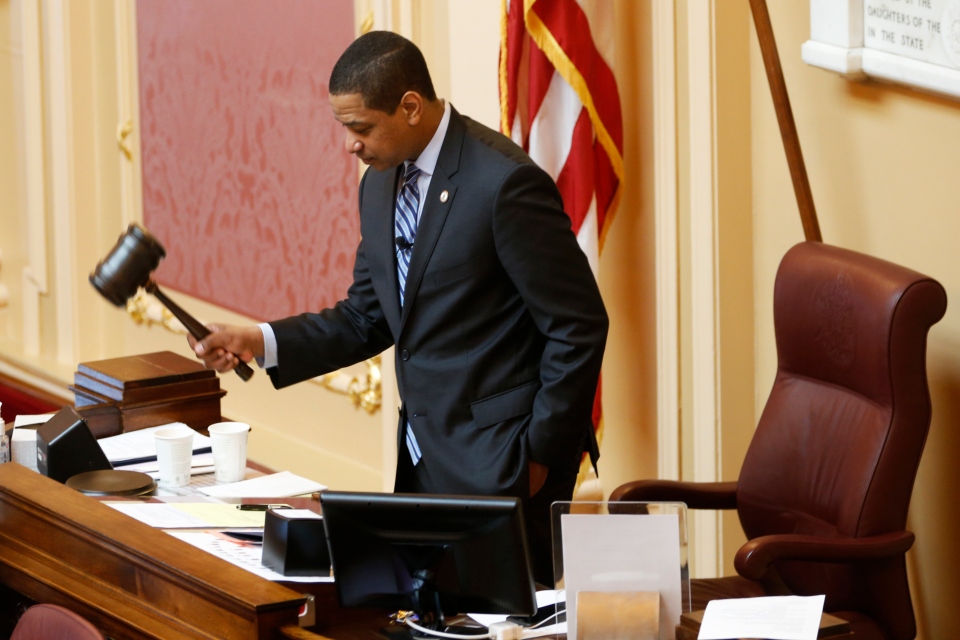 An effort to launch the impeachment of Virginia's top Black elected official was set aside on Monday and Gov. Ralph Northam declared a new "race and equity" agenda for the rest of his tenure, saying he really believes "that things happen for a reason."

Revelations of racist behavior and allegations of sexual assault that happened years ago have engulfed Northam, Lt. Gov. Justin Fairfax and Attorney General Mark Herring. It increasingly appears that all three will survive the immediate firestorm, but with deep wounds that threaten their political clout.

Northam and Herring are still struggling to recover after acknowledging that they each once wore blackface as young men in the 1980s. When it appeared Fairfax might take over as governor, two women came forward accusing him of sexual assault in the 2000s. Fairfax vehemently denied it, calling on the FBI to investigate.

Northam, for his part, said in an interview broadcast Monday on "CBS This Morning" that he now understands that he "was born into white privilege," which is why he will dedicate his remaining tenure to policies aimed at helping his Black constituents.

"I really believe that things happen for a reason," Northam said. "I will focus on race and equity. That's something that, for the next three years, is going to be my commitment to Virginia. And I really think we can make impactful changes."

All three men are facing a reckoning over events that happened long before they took office, but it's a full-blown crisis for the Democratic Party, which counts on the support of Black voters and has taken an almost zero-tolerance approach to sexual misconduct in the #MeToo era.

A housecleaning could be costly: The GOP already controls Virginia's legislature, and if all three resign, Republican state House Speaker Kirk Cox would become Virginia's governor. Democrats are still hoping to flip the General Assembly in legislative elections this year.

Democratic Del. Patrick Hope tweeted early Monday that he got "an enormous amount of sincere and thoughtful feedback" from colleagues after circulating a draft of his impeachment bill, and that he sees that "additional conversations ... need to take place before anything is filed."

Lawmakers still might launch some sort of investigation of Fairfax, even if impeachment isn't immediately in the cards. Meredith Watson and Vanessa Tyson have accused him of sexual assault and offered to testify.

The Associated Press generally does not name people who say they are victims of sexual assault, but both women have come forward voluntarily.

Watson alleges Fairfax raped her while they were students at Duke University in 2000. Tyson, a California college professor, accused Fairfax of forcing her to perform oral sex on him at a Boston hotel in 2004.

Fairfax denies ever sexually assaulting anyone.

"Frankly, we really want any entity with comprehensive investigative power to thoroughly look into these accusations," Fairfax spokeswoman Lauren Burke said. "There needs to be verification of basic facts about these allegations. It feels like something bigger is going on here."

Meanwhile, Fairfax has made it clear he won't resign.

"Before Donald Trump, I would say with this kind of stuff, it's impossible for a person to just hang on, put their head down and ignore it," said Quentin Kidd, a political science professor at Christopher Newport University.  "Post-Donald Trump, I think what elected officials are willing to do has changed in some ways. So can he hang on? Certainly he can hang on."

If Fairfax were to leave, it's unclear who could replace him. Northam may try to appoint a Democrat, while Republicans could mount a legal challenge with the goal of getting Senate Pro Tem Steve Newman to serve as both a voting senator and temporary lieutenant governor.

Herring would be next in line if both Northam and Fairfax were to leave office, and he initially made a forceful call for Northam to step down, but then he too acknowledged wearing blackface at a party in 1980, opening himself to simultaneous charges of racism, opportunism and hypocrisy.

In this latest interview, Northam provided a more complete explanation of his statements that set off this whole crisis, when he reacted to the discovery of a photo on his 1984 medical school yearbook page showing one man wearing blackface next to another person in a Ku Klux Klan hood and robe. Northam initially said he was in the photo; then he denied it, while saying he did wear blackface to a dance party that same year.

Northam told "CBS This Morning" he mistakenly took responsibility for the picture because had never seen the image before.

"When you're in a state of shock like I was, we don't always think as clearly as we should," said Northam, who worked for years as a pediatric neurologist before entering politics.

But "when I stepped back and looked at it, I just said I know it's not me in the Klan outfit. And I started looking in the picture of the individual with blackface. I said that's not me either," he said.

Northam told CBS it's up to his fellow leaders to decide whether they want to remain on the job. He said he supports Fairfax's call for an investigation, and as for Herring, "just like me, he has grown."