Virginia Looks to Black Caucus for Cues in Political Turmoil 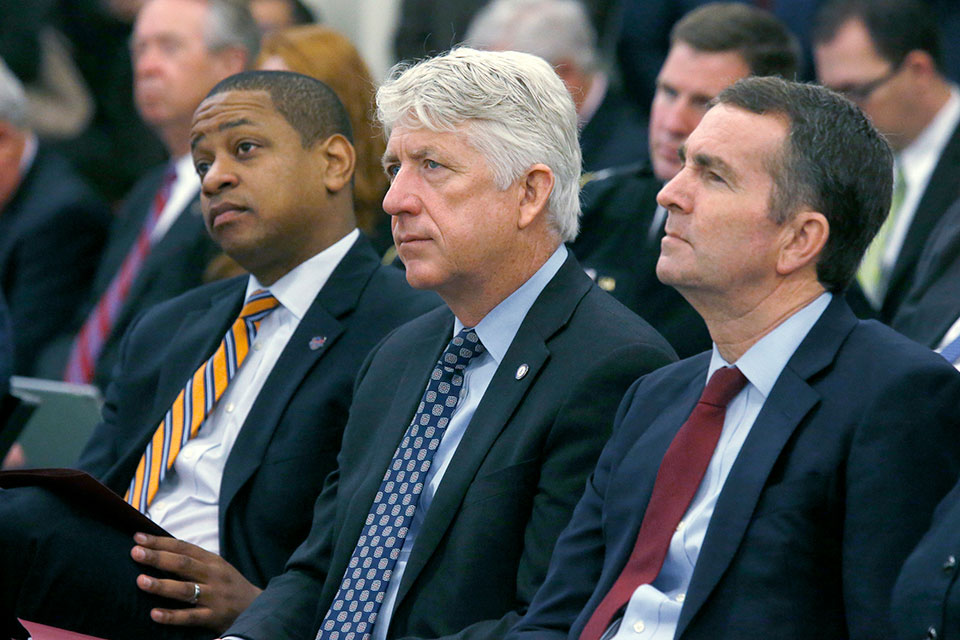 RICHMOND, Va. (AP) — With Virginia's top three elected officials engulfed in scandal, fellow Democrats were rendered practically speechless, uncertain of how to thread their way through the racial and sexual allegations and the tangled political implications. 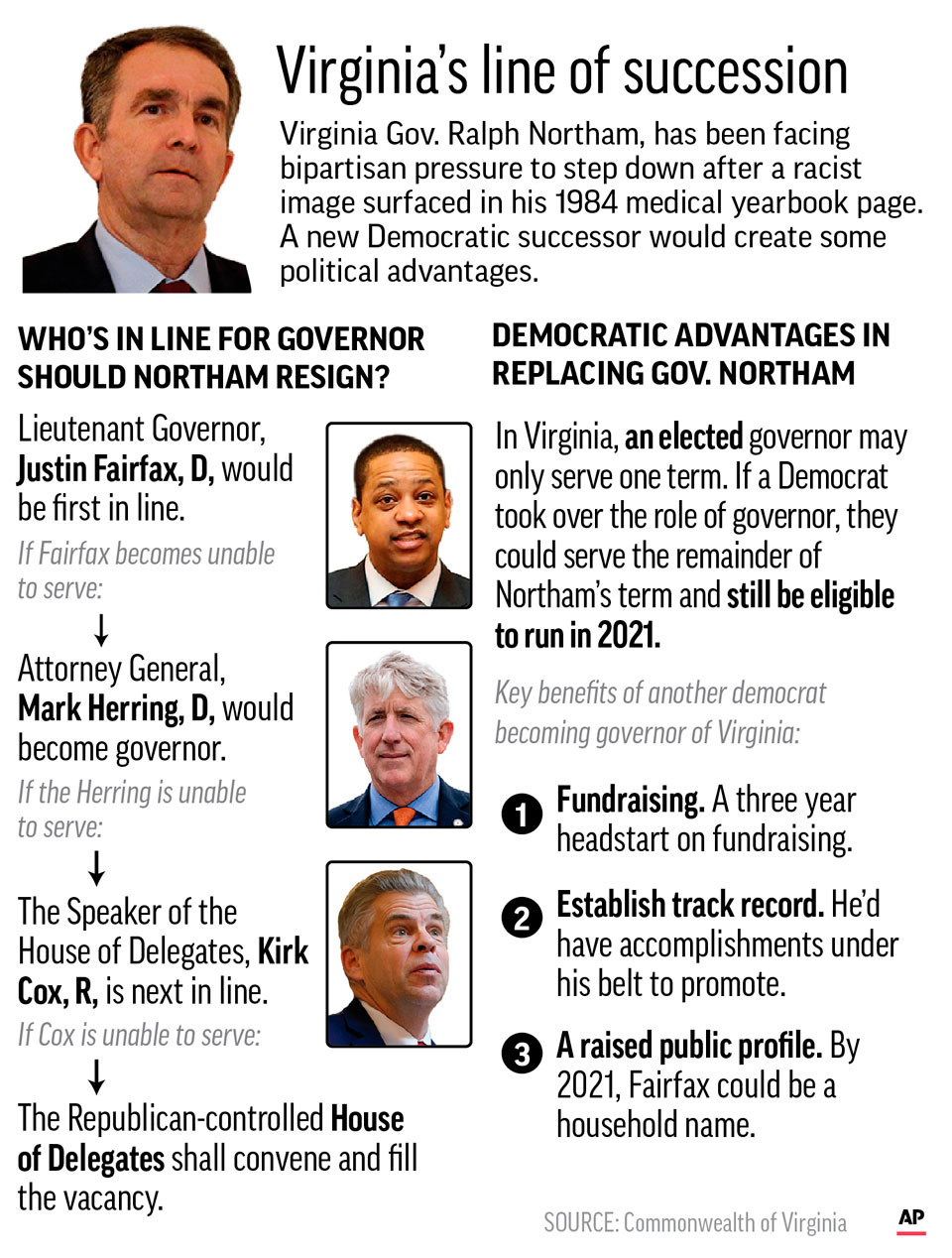 Graphic highlights the line of succession for Virginia governor and looks at strategic advantages democrats could benefit fromGov. Ralph Northam's career was already teetering over a racist photo in his 1984 medical school yearbook when the crisis seemed to spiral completely out of control Wednesday. First, the state's attorney general acknowledged that he, too, put on blackface once, when he was a college student. Then a woman publicly accused the lieutenant governor of sexually assaulting her 15 years ago.

Everyone in Richmond, it seemed, was waiting Thursday for Virginia's Legislative Black Caucus to respond. The caucus has been calling for Northam's resignation over the past week but was silent about the latest developments.

The crisis threatens to bring down all three of the politicians, all of them Democrats. If Northam resigns, Lt. Gov. Justin Fairfax stands to become Virginia's second Black governor.

Attorney General Mark Herring is next in the line of succession, followed by House Speaker Kirk Cox, a conservative Republican.

Herring, who had been urging Northam to step down and was planning to run for governor in 2021, admitted wearing brown makeup and a wig in 1980 to look like a rapper during a party when he was a 19-year-old student at the University of Virginia.

He apologized for his "callous" behavior and said the days ahead "will make it clear whether I can or should continue to serve." The 57-year-old Herring came forward with his statement after rumors about the existence of a blackface photo of him began circulating at the Capitol. But he made no mention of any photo. 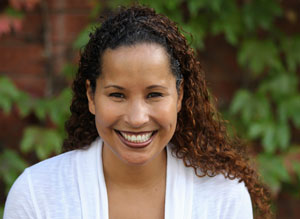 In this undated photo provided by Scripps College, Vanessa Tyson, an associate professor in politics at Scripps College, poses for a photo. Tyson, a 42-year-old political science professor who studies the intersection of politics and the #MeToo movement, went public with her sexual assault accusation against Virginia Lt. Gov. Justin Fairfax on Wednesday, Feb. 6, 2019, saying in a statement that she repressed the memory for years but came forward in part because of the possibility that Fairfax could succeed a scandal-mired governor. (Scripps College via AP)Then Vanessa Tyson, whose sexual assault allegations against Fairfax surfaced earlier this week, put out a detailed statement saying he forced her to perform oral sex on him in a hotel room in 2004 during the Democratic National Convention in Boston. The Associated Press typically does not identify those who say they were sexually assaulted, but the 42-year-old college professor from California issued the statement in her name.

Fairfax has repeatedly denied her allegations, saying that the encounter was consensual and that he is the victim of a strategically timed political smear.

At the Capitol, lawmakers were dumbstruck over Wednesday's fast-moving developments, with Democratic Sen. Barbara Favola saying, "I have to take a breath and think about this."

GOP House Majority Leader Todd Gilbert said it would be "reckless" to comment. "There's just too much flying around," he said.

President Donald Trump accused Democrats on Thursday of a political double-standard, tweeting: "If the three failing pols were Republicans, far stronger action would be taken."

Black lawmakers' response could set the tone for whether fellow Democrats demand the resignation of the lieutenant governor and attorney general.

Cox called the allegations against Fairfax "extremely serious" and said they need a "full airing of facts." The Republican leader also urged Herring to "adhere to the standard he has set for others," a nod to Herring's previous call that Northam resign.

On Thursday, a few hundred anti-abortion demonstrators gathered at the Capitol to renew their criticism of Northam for backing a bill loosening restrictions on late-term abortions. One carried a sign referring to Northam as "Gov Doctor Death."

And in a nod to the scandals facing the Democrats, GOP Sen. Amanda Chase said while leading the crowd in prayer: "The actions that have been taken by our leadership have hurt the very heart of God."

Democrats have expressed fear that the uproar over the governor could jeopardize their chances of taking control of the GOP-dominated Virginia legislature this year after making big gains in 2017.

At the same time, the Democrats nationally have taken a hard line against misconduct in their ranks because women and minorities are a vital part of their base and they want to be able to criticize Trump's behavior without looking hypocritical.

Northam has come under pressure from nearly the entire Democratic establishment to resign after the discovery of a photo on his yearbook profile page of someone in blackface standing next to a person in a Ku Klux Klan hood and robe. Northam initially said he was in the photo, then denied it, but acknowledged putting shoe polish on his face for a dance contest in Texas in 1984, when he was in the Army.

Herring came down hard on Northam when the yearbook photo surfaced, condemning it as "indefensible," and "profoundly offensive." He said it was no longer possible for Northam to lead the state.