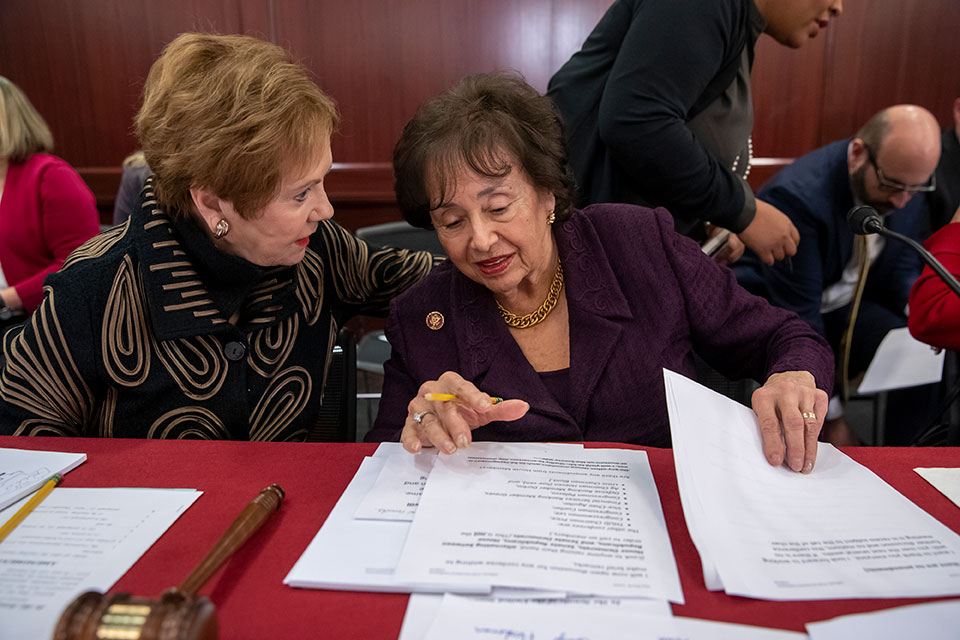 WASHINGTON (AP) — President Donald Trump took to Twitter on Thursday to ratchet up his demands on his long-stalled border wall, appearing to sour on congressional talks aimed at striking a deal with Democrats that he could sign.

In a barrage of morning tweets, Trump sent mixed messages in which he alternately hardened his wall demand, but also suggested that repairing existing fencing is a big part of his plan.

"Lets just call them WALLS from now on and stop playing political games! A WALL is a WALL!," Trump tweeted.

Lets just call them WALLS from now on and stop playing political games! A WALL is a WALL!

Trump's tweets came a day after Democrats in the House offered a vague border security plan that would not provide a penny for his wall, ignoring — for now — his warnings that they'd be wasting their time if they don't come up with wall money.

The Democratic offer Wednesday was just a starting point in House-Senate talks on border security funding that kicked off in a basement room in the Capitol. A top Democrat acknowledged that "everything is on the table," including the border barriers demanded by Trump. Lawmakers on both sides flashed signs of flexibility, eager to demonstrate willingness to compromise in hopes of resolving the standoff with Trump that sparked the 35-day partial government shutdown.

But Trump on Thursday tamped down expectations, telling GOP negotiators that they were "wasting their time."

"Democrats, despite all of the evidence, proof and Caravans coming, are not going to give money to build the DESPERATELY needed WALL. I've got you covered. Wall is already being built, I don't expect much help!" Trump tweeted.

Republicans on the Homeland Security Committee are wasting their time. Democrats, despite all of the evidence, proof and Caravans coming, are not going to give money to build the DESPERATELY needed WALL. I’ve got you covered. Wall is already being built, I don’t expect much help!

The high-stakes talks are taking place against the backdrop of another possible shutdown in mid-February — an outcome Trump's GOP allies in the Senate are especially eager to avoid.

Trump and the White House have proven to be an unpredictable force in the shutdown debate, mixing softer rhetoric about a multi-faceted approach to border security with campaign-style bluster about the wall. Lawmakers negotiating the bill are well aware that he could move to quash an agreement at any time, plunging them back into crisis.

Still, Trump's request for $5.7 billion to build about 234 miles of barriers along the U.S. border with Mexico faces uphill odds. Even Trump's GOP allies acknowledge he may only get a fraction of it. The Democratic plan includes new money for customs agents, scanners, aircraft and boats to police the border, and to provide humanitarian assistance for migrants.

"Democrats are once again supporting strong border security as an essential component of homeland security.

Senators revisited a bipartisan $1.6 billion proposal for 65 miles of fencing in the Rio Grande Valley in Texas that passed a key committee last year. The panel of old-school lawmakers from the powerful appropriations committees has ample expertise on homeland security issues, as many of them helped finance fence built over the years that stretches across much of the 1,954-mile border.

"Because of the work we did years ago we've already built almost 700 miles of fencing on our nation's border," said Rep. David Price, D-N.C. "Whatever the president may say it is far from an open border.

"Meanwhile, the number of undocumented immigrants crossing our border or attempting to cross remain not at alarming highs but at historic lows."

Republican allies of the president said there will have to be some money to meet Trump's demands. But they also predict privately that the White House is eager to grab an agreement and declare victory — even if winning only a fraction of Trump's request.

"The components of border security are people, technology and a barrier. And everybody has voted for all three," said Sen. John Hoeven, R-N.D. "To get to an agreement we've got to have all three in there."

But as talks on the homeland security budget open, Trump and Republicans are in a weakened position just 17 days before the government runs out of money again without a deal. Democrats won back the House in a midterm rout and prevailed over Trump in the shutdown battle.

The comments at once served notice that Democrats weren't ruling out financing physical structures, but would do so only on a limited basis.
Sen. Richard Shelby, R-Ala., who chairs the Senate Appropriations Committee, said that while Republicans favor improved border security technology, "Smart technology alone does not actually stop anyone from crossing into the U.S. illegally."

Shelby said physical barriers are needed "not from coast to coast, but strategically placed where traffic is highest."

That echoed recent remarks by Trump as he's retreated from his more strident comments from the 2016 presidential campaign.

The president surrendered Friday and agreed to reopen government for three weeks so negotiators can seek a border security deal, but with no commitments for wall funds.

Prospects for broadening the scope of the talks to include broader immigration issues such as providing protection against deportation to "Dreamer" immigrants brought illegally to the country as children — or even must-do legislation to increase the government's borrowing cap — appeared to be fading.