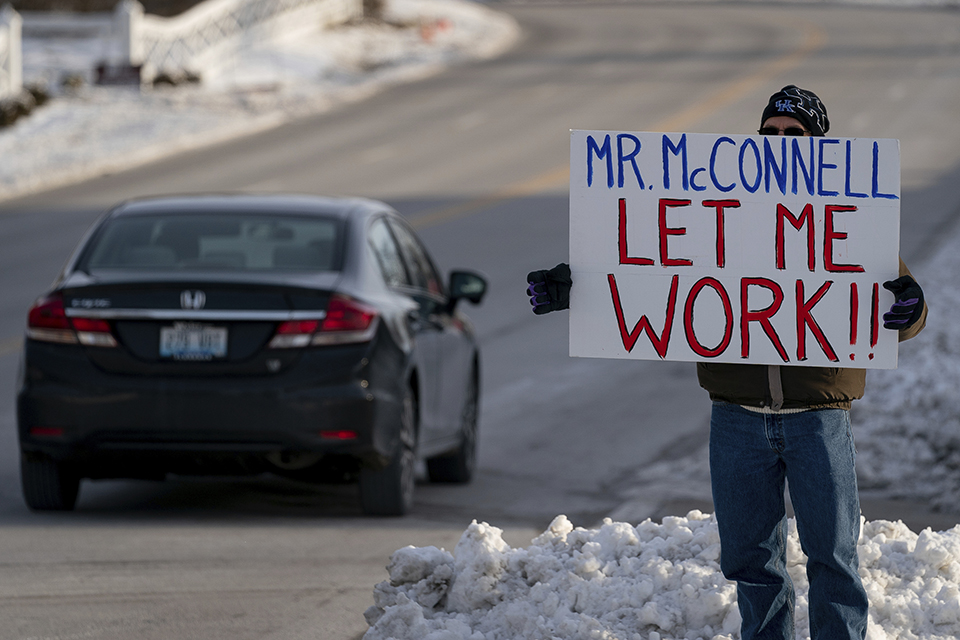 WASHINGTON (AP) — House Democrats are putting forward a new proposal to end the government shutdown, aiming to lure President Donald Trump away from his demand for a border wall by offering billions of new dollars for other border security measures.

The offer is a possible path toward a compromise even though it does not have money for he wants for building the wall between the U.S and Mexico.

The Democratic proposal is expected to go beyond the $1.6 billion the White House initially requested from Congress for border security, before Trump demanded $5.7 billion for his long-promised wall. The proposal is still being drafted.

The White House signaled earlier that it was open to counteroffers to Trump's recent proposals.

Rep. Hakeem Jeffries, D-N.Y., chairman of the Democratic caucus, told reporters after the party's morning caucus meeting that Democrats are willing to boost personnel, technology and other enhancements at the border.

"House Democrats, like the American people, support 21st Century border security," Jeffries said. But Democrats remain opposed to what Jeffries called "a medieval border wall. That is a 5th Century solution to a 21st Century problem."

The potential new offer from Democrats comes during severe disruptions in some federal services as the longest government shutdown in U.S. history stretches into a second month and 800,000 federal workers are scheduled to miss another paycheck on Friday.

Trump has proposed having Congress fund his $5.7 billion demand for a border wall that he had promised on the campaign trail that Mexico would pay for. In exchange, he's offering for temporary deportation relief for some immigrants, including young immigrants who came to the U.S. illegally with their parents. Their legal status is now at risk because Trump is seeking to end the program that protects them.

The White House did not immediately respond to the new turn from House Democrats. The administration has been adamant that any deal must include money for the wall.
Trump, on a conference call Wednesday with state and local leaders, stressed he would not back off his demand for $5.7 billion for the wall. "We need this approved," he said. Republicans "have to stick together."

He acknowledged "there's pressure because of the shutdown" but thinks Democrats are feeling it more.

Earlier, a White House official, who spoke on condition of anonymity to discuss private conversations, said Trump would be willing to go along with permanent legal status for the young immigrants, but probably not a path to citizenship. The House Democratic proposal, though, is about money for border security, not for an immigration overhaul.

The Senate this week is set to vote on dueling proposals — a Republican one that would give Trump money for the wall and one from Democrats that would re-open government through Feb. 8, with no wall money, giving bargainers time to talk about it.

Both proposals are likely to fail to reach the 60-vote threshold needed in the Senate, where Republicans hold a 53-47 majority.

But the votes are the first in the Senate since the shutdown began, forcing a political reckoning for senators: side with Trump or vote to end the shutdown temporarily and keep negotiating.
Democrats dismissed Trump's plan, which included temporary protections for the young immigrants but also harsh new curbs on Central Americans seeking safe haven in the U.S.

Senate Minority Leader Chuck Schumer, D-N.Y., said the GOP plan's immigration proposals were "even more radical" than their past positions.

On Wednesday, the Democratic-controlled House will vote on more legislation to reopen the government. House Speaker Nancy Pelosi has shown no sign of yielding, especially as Democrats hold the upper hand in public opinion polls.

With their new proposal, Democratic Rep. Jim Clyburn of South Carolina suggested the price tag of the new plan could reach the $5.7 billion Trump wants on border security — but it would be spent differently.

"More judges, more border control, additional technology — these are the kinds of things that we are going to be putting forward, and I think can be done using the figure that the president has put on the table," Clyburn said.

However, a senior Democratic aide who was unauthorized to discuss ongoing talks, said the money would not reach that level.

In the Senate, the coming votes represent the first test of Senate Republicans' resolve behind Trump's insistence that agencies remain closed until Congress approves $5.7 billion to build a wall on the Mexican border. For Democrats, the votes will show whether there are any cracks in their so-far unified rejection of Trump's demand.

The White House views Trump's offer as a test of whether Democratic leaders can hold their members together in opposition, said a person familiar with White House thinking who was not authorized to speak publicly. The administration also wants to show it is willing to negotiate, hoping it will push more blame onto Democrats, who are opposing negotiations until the government reopens.

One freshman, Democrat Rep. Elaine Luria of Virginia, a state that's home to many federal workers, was circulating a draft letter Tuesday urging Pelosi to propose a deal that would reopen the government, then consider border security legislation — including holding votes on Trump's demand for wall money — by the end of February. A similar effort was underway last week by a bipartisan group of senators.

The Republican bill largely reflects the proposal Trump described to the nation in a brief address Saturday. It would reopen federal agencies, revamp immigration laws and provide $5.7 billion to start building his prized border wall with Mexico — a project Democrats consider an ineffective, wasteful monument to a ridiculous Trump campaign promise.

The measure would provide a three-year extension of protections against deportation for 700,000 people covered by the Deferred Action for Childhood Arrivals program. Trump initially tried terminating the Obama-era program but the effort has been blocked by federal judges.