Amid 2018's Tragedies Were Moments of Compassion and Duty 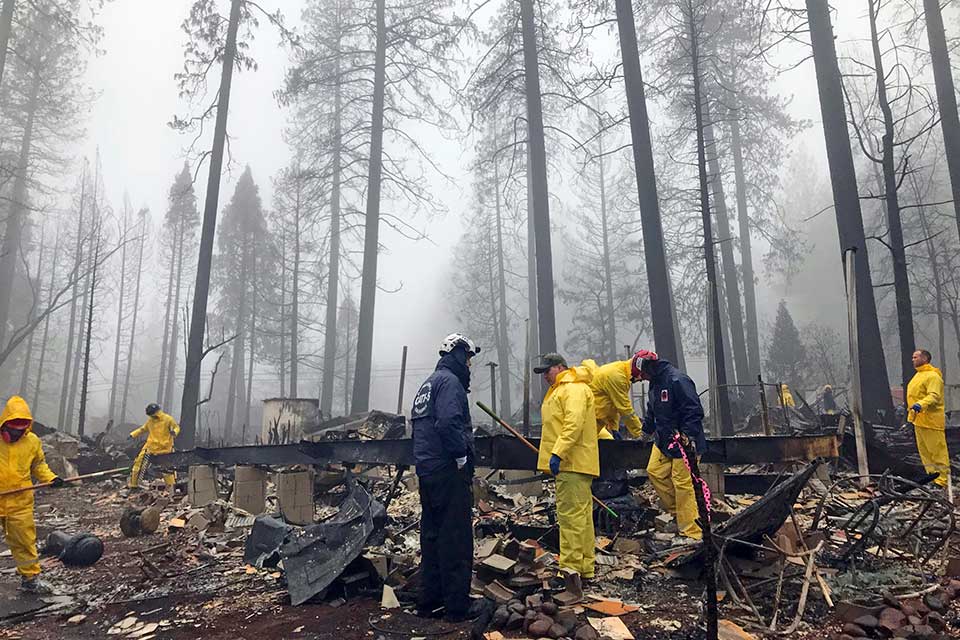 The cities of Parkland, Paradise and Pittsburgh became synonymous with tragedy in 2018, a year when the nation seemed to careen from one deadly horror to another. Yet in every calamity, there were people who showed their humanity, their selfless strength and their sense of duty amid the suffering.

As the year draws to a close, Associated Press reporters on the front lines of some of the year's heartbreaking stories offer up accounts of compassion and decency. 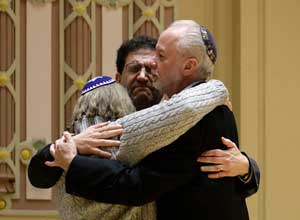 In this Oct. 28, 2018, file photo, Rabbi Jeffrey Myers, right, of Tree of Life/Or L'Simcha Congregation hugs Rabbi Cheryl Klein, left, of Dor Hadash Congregation and Rabbi Jonathan Perlman during a community gathering held in the aftermath of a deadly shooting at the Tree of Life Synagogue in Pittsburgh. As the Jewish community grieved, Myers took a leading role during public memorials and presided over seven funerals in the space of less than a week. (AP Photo/Matt Rourke, File)Rabbi Jeffrey Myers said no class in any seminary could have prepared anyone for the role he was thrust into.

Myers was leading Shabbat services when gunfire erupted inside his Pittsburgh synagogue on Oct. 27. After helping others to safety, Myers turned back and raced up the stairs to a choir loft, where he called 911. Seven members of his Tree of Life congregation and four others in the building were killed.

As the Jewish community grieved, Myers took a leading role during public memorials and presided over seven funerals in the space of less than a week.

"I really had two choices when it came down to how to respond," Myers said. "One of them was ... curl up with a bottle of scotch. The second choice was to act upon it. I chose to act upon it."

"There's no question that he's been super, and it's hard to imagine that anybody could have done a better job," Charny said. "He has the right touch. He has maintained through all this a sense of humor. I don't know how he's done that."

Myers has vowed to no longer use the word "hate."

"To me, that's the mission that has come out of this, that for 11 beautiful people to have not died in vain," the rabbi said. "The conversation about hate speech in America must be elevated and it must gain attention, because that type of speech leads to action such as what happened at my synagogue."

A Morbid But Critical Task

It was the week before Thanksgiving when Craig Covey got the call for what would be his most difficult mission as a search-and-rescue team leader: picking through the ashes of Paradise for human remains.

It was a morbid but critical task.

A wildfire that swept through on Nov. 8 all but obliterated Paradise, once home to 27,000 people. To find and identify the 86 dead, authorities had to call on searchers like Covey to gather up what amounted in some cases to little more than teeth, bone fragments or artificial hips. Then they had to rely on the expertise of rapid-testing DNA labs, forensic anthropologists and other specialists.

"It was apocalyptic up there," Covey said several weeks after returning home to Costa Mesa, California.

Covey's team is deployed by the Federal Emergency Management Agency to disasters across the country and beyond. Earlier this year, his team helped rescue an exhausted 82-year-old man who had been flushed out of his car by floodwaters and pinned in some trees amid Hurricane Florence in North Carolina.

Paradise was different, but brought rewards of its own.

"We weren't shaking hands with people," Covey said. "But we were making a difference for folks, for closure, who are missing their families."

Dogs in Tune with Humans

When classes resumed in late February following the massacre of 17 students and staff at Parkland's Marjorie Stoneman Douglas High School, a therapy dog by the name of Fergie was brought in.

Fergie, an 8-year-old cross between a golden retriever and a poodle, zeroed in on one young man and sat on his feet the entire class, barely moving, said Aneysi Fernandez, volunteer coordinator of the nonprofit group Canine Assisted Therapy.

"It turned out that was one of the students who lost most of his friends in the shooting," said Fernandez. "Some of our dogs like Fergie are very in tune with human emotions."

Several therapy animal groups helped out in those dark days after the Feb. 14 mass shooting. The dogs — and in some cases, donkeys and horses — went into the cafeteria and classrooms. They were also at vigils and marches.

Fernandez's organization sent 35 therapy dogs and their handlers into the school. All of the animals were trained and selected for their calm, happy demeanor.

Some Parkland students specifically asked for a dog to shadow them during classes, saying that the animals' presence eased the stress of returning to a place where such a horrible thing happened.

"It's nice not to be asked any questions, to not have to relive the event," Fernandez said.

"Everyone grieves differently. Students who didn't want to talk could pet a dog."

Ten months after the tragedy, a dozen dogs still show up at the school every day, mostly to sit by the side of those teens who need a calming presence.

'It's in My Neighborhood'

It was known as the Wall of Forgotten Natives, a sprawling homeless encampment that sprouted along a Minneapolis freeway sound barrier over the summer.

Most of those living there were American Indians, who make up an outsized portion of the homeless population in the city, and the tents stood on what was once Dakota land.

University of Minnesota medical and law student Kristina Tester grew up nearby and began helping at the camp as part of an elective rotation for her degree. She began doing clean-needle exchanges and continued on as a volunteer for months after her assignment ended.

"There's really not much of a difference between myself and any of the residents who are here at the homeless camp, other than sort of luck of the draw and geographic-political lottery," she said.

The 26-year-old Tester said she organized groups of university students to do laundry for camp residents. She also served meals about once a week with neighbors. Recently she delivered cookies and blankets made by high school students.

Tester, who is non-Indian, said she did it because "it's in my neighborhood."

At its peak, the encampment had 300 people, but they began moving into a temporary shelter across the highway as winter approached.

"If it wasn't for her, we'd be cold, because she brings us warm blankets," Thunder Hawk said.