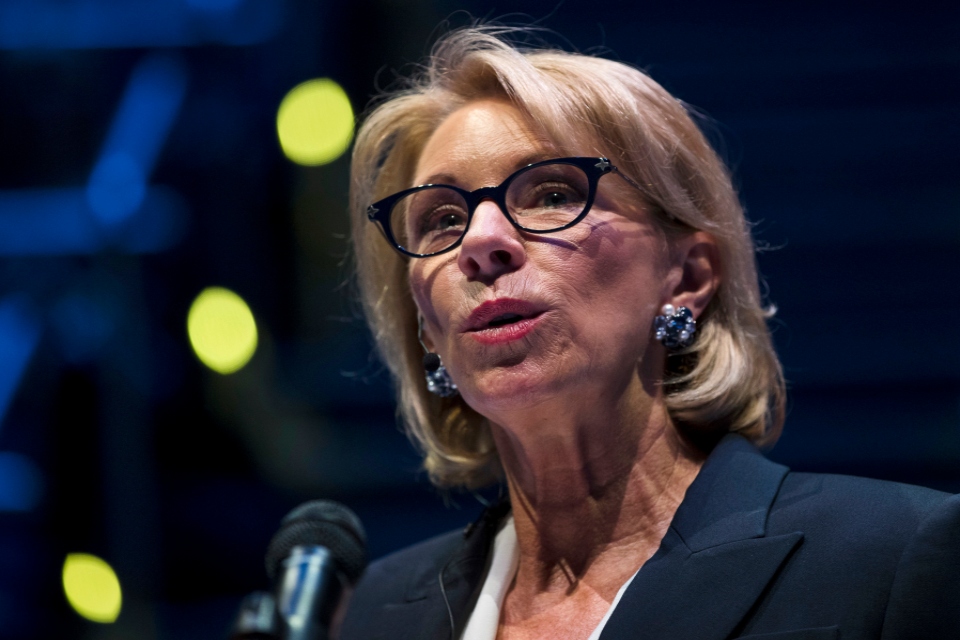 President Donald Trump's school safety commission on Tuesday proposed a rollback of an Obama-era policy that was meant to curb racial disparities in school discipline but that critics say left schools afraid to take action against potentially dangerous students.

The panel, led by Education Secretary Betsy DeVos, made the recommendation in a report that lays out dozens of suggestions to improve safety in America's schools. Trump created the commission in March following a Parkland, Florida, school shooting that killed 17 students and staff members.

The report covers areas ranging from mental health to the regulation of violent video games, but it makes relatively few recommendations on gun regulation, an area that many had expected the panel to tackle.

On the question of whether schools should arm staff members, the panel said it should be left to states and schools to decide, but DeVos said she urges schools to "seriously consider" the option. The report highlights districts that have armed teachers, and it points schools to federal funding that can be used for firearm training.

"Our conclusions in this report do not impose one-size-fits-all solutions for everyone, everywhere," DeVos said in a call with reporters. "The primary responsibility for the physical security of schools and the safety of their students naturally rests with states and local communities."

The commission gave the report to Trump, who planned to talk about it later Tuesday.

Among the chief proposals is a rollback of 2014 guidance urging schools not to suspend, expel or report students to police except in the most extreme cases.

Instead, the guidance calls for a variety of "restorative justice" remedies that don't remove students from the classroom.

President Barack Obama's administration issued the guidance after finding that black students were more than three times as likely as their white peers to be suspended or expelled. The guidance warns that schools suspected of discrimination — even if it is unintentional — can face investigations and risk losing federal funding.

But the policy came under scrutiny following the Parkland shooting, with some conservatives suggesting it discouraged school officials from reporting the shooter's past behavioral problems to police. Florida Republican Sen. Marco Rubio, one of the most vocal critics, urged DeVos to find a better balance between discipline and school safety.

In its report, the commission says the policy was well-intentioned but "may have paradoxically contributed to making schools less safe." It calls for a rollback, saying disciplinary decisions should be left to school officials. It said the Justice Department should still investigate intentional discrimination but not the unintentional cases that are barred under the 2014 policy.

The commission's proposal was praised by some conservative groups but drew harsh criticism from Democrats and advocacy groups.

"Despite overwhelming evidence and basic common sense, Secretary DeVos is trying to make the case that it's not weapons of war in schools that make students unsafe, but rather the true danger is schools' attempts to fight racism and inappropriate discipline," said Sen. Patty Murray, the top Democrat on the Senate's committee overseeing education.

Along with DeVos, the safety commission includes leaders of the departments of Justice, Health and Human Services and Homeland Security. They issued their findings after more than a dozen meetings with teachers, parents, students, mental health experts, police and survivors of school shootings.

On gun regulation, the commission's only suggested change was a call for more states to adopt laws allowing "extreme risk protection orders," or court orders that temporarily restrict access to firearms for people who are found to pose risks to themselves or others.

The group studied whether states should raise the minimum age to buy guns, which is often 18 for rifles and 21 for handguns, but has been raised to 21 for all guns in some states. Florida made the move following the Parkland shooting, joining others including Hawaii and Illinois.

But the panel argues the change wouldn't make schools safer. It argued there's no research showing that changing the minimum age reduces killings, and it noted that most school shooters get their guns from family members, not through purchases.

Among other proposals, the commission called for more training to help school officials identify mental health problems when students are younger, and it urges schools to hire more military veterans or retired police officers with the training to respond in an emergency.

It also suggested several measures schools should take to "harden" their buildings, including installing windows with laminated or bulletproof glass, and making sure all classroom doors can be locked from the inside.

"Sadly, incidents of school violence are too common, and too many families and communities have faced these horrible challenges," DeVos said. "But Americans have never shied away from challenges, nor have we cowered when evil manifests itself."