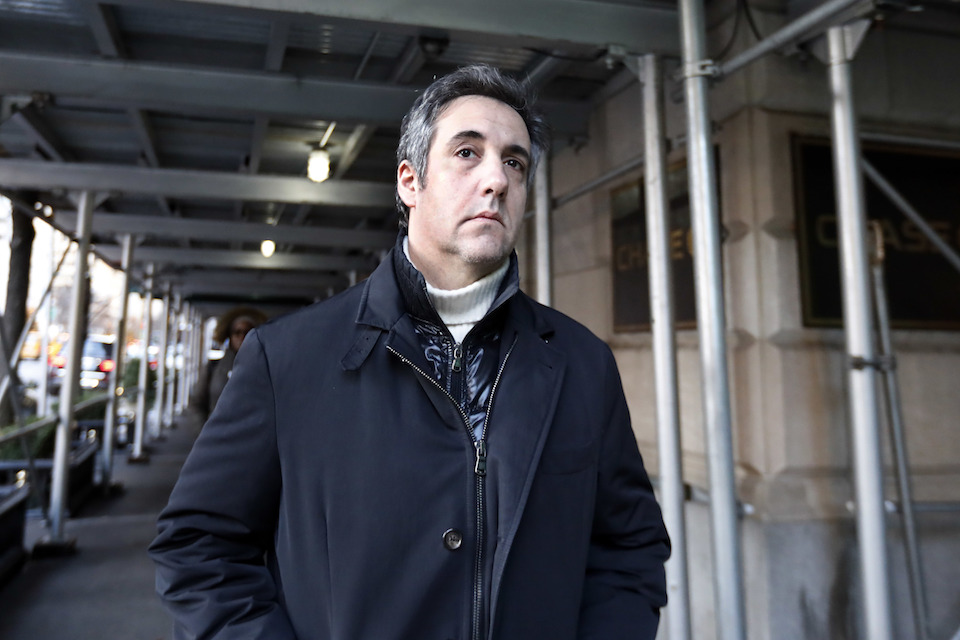 WASHINGTON (AP) — Key pieces of the special counsel's Russia investigation appear to be falling into place.

They revealed new details about outreach from Russia early in the Trump presidential campaign.

And they vividly laid out how they say two central figures in the Trump orbit — Michael Cohen and Paul Manafort — were continually tripped up by lies.

Here are the key takeaways from the latest round of court documents from Robert Mueller's investigation:

Trump announced his presidential candidacy in June 2015 — and by November, the Russians were reaching out about "political synergy."

The court papers provide new details about one of the earliest known contacts between Russia and a Trump campaign associate.

In fall 2015, Cohen was months into his work on a proposed Trump Tower in Moscow when an unidentified Russian national proposed a meeting between Trump and Russian President Vladimir Putin.

The person, prosecutors say, claimed to be a "trusted person" in Russia, who could offer the Trump campaign "political synergy" and "synergy on a government level."

And the person sought to connect the Trump business project with the campaign, saying the meeting could have a "phenomenal" impact on the proposed tower in Moscow.

There is "no bigger warranty in any project than the consent of" Putin, the person told Cohen.

Still, the outreach is more evidence that Russia was eager to build relationships with the Trump campaign and sought to use Trump's business as an entree.

Prosecutors didn't mince words: The campaign finance violations Cohen committed came "in coordination with and at the direction of" Trump, according to the new filings.

Both had alleged they had affairs with Trump, which the White House denies. Daniels was paid $130,000 as part of a nondisclosure agreement signed days before the 2016 election.

Trump has denied knowing anything about the Daniels payment.

But the filing directly contradicts that claim. It also, for the first time, directly ties Trump to a federal crime.

Campaign finance law requires candidates to report any payments made to influence the election. The Trump campaign failed to report the payment at the time.

Prosecutors don't say Trump broke the law and the Justice Department has maintained that a sitting president cannot be indicted.

At least they did when Cohen lied to Congress— and it could have implications for other episodes under investigation in the Russia probe.

Cohen has admitted lying to Congress about how long he worked on the Trump Tower Moscow project and repeating the falsehoods to the press.

But Mueller's team doesn't just consider this self-protection. It was a "deliberate effort" to publicly present a "false narrative" in the hopes of limiting the scope of the various Russia investigations, prosecutors say in the court papers.

Mueller's focus on public assertions — and their impact on witnesses, lawmakers and ongoing investigations — could serve as a warning shot to Trump.

The president also has spread falsehoods about his campaign's ties to Russia.

The special counsel has questioned witnesses about a statement Trump dictated on Air Force One last year that omitted several details about a June 2016 Trump Tower meeting with a Russian attorney.

The filing suggests Mueller intends to hold witnesses accountable for the statements made privately and publicly.

If the lies are meant to influence the investigation, they may factor into Mueller investigation into whether Trump has tried to obstruct the probe.

Despite their criminal cases, the Trump administration just can't quit Manafort or Cohen, according to prosecutors.

In Cohen's case, Mueller's team said he has provided "relevant and useful" information about his contacts with people connected to the Trump White House in 2017 and 2018. With Manafort, prosecutors say he also had several recent Trump administration contacts — and lied about them.

After Manafort pleaded guilty and agreed to cooperate with the government, prosecutors say he told them he had "no direct or indirect" contact with people in the Trump administration. But that was a lie, they say.

That included communication with a "senior administration official" through February 2018.

Manafort also directed a person to speak with an administration official on his "behalf" on May 26.

Neither Cohen's nor Manafort's filings detail the content of the conversations or identify the officials. Manafort has contended he was truthful with Mueller's team.

Since his guilty plea, Trump has attacked Cohen as a liar who is telling "stories" to get a reduced prison sentence.

But prosecutors revealed Friday that they're not just taking Cohen's word for it.

The information Cohen told prosecutors in seven separate interviews "has been credible and consistent with other evidence obtained" in Mueller's investigation, they note in the sentencing recommendation.

Some of that information from Cohen, prosecutors say, concerns "certain discrete Russia-related matters" at the "core" of Mueller's probe, particularly those involving his contact with Trump Organization executives.

Trump and his lawyers have downplayed the Trump Tower Moscow proposal.

The president has said he never put any money into it and ultimately decided not to do it.

But Mueller's team reveals that if he did, they believe they know the windfall.

According to Cohen's filing, the deal could have yielded "hundreds of millions of dollars from Russian sources in licensing fees and other revenues."

They also note that the project's success likely hinged on Russian government approval, which Cohen sought.