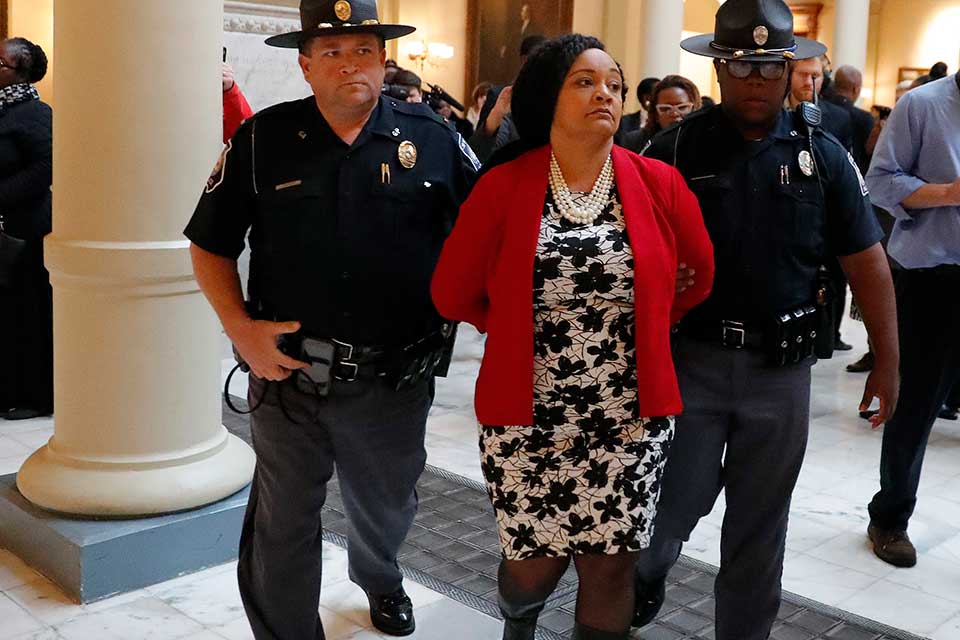 Unofficial results in one of the nation's hottest midterm contests give Republican Brian Kemp a slim majority. But Democrat Stacey Abrams maintains that enough uncounted absentee, mail-in and provisional ballots remain to force a Dec. 4 runoff and keep alive her bid to become the first black woman in American history to be elected governor of a state. Other down-ballot contests also remain undecided.

In the week since voters went to the polls, arguments over certain provisional and absentee ballots have been presented at a dizzying pace before several different judges in federal courts.

Among them was a lawsuit filed Sunday by Abrams' campaign seeking a one-day extension of the deadline for county election officials to certify their results. As a hearing drew to a close just before the 5 p.m. Tuesday deadline, U.S. District Judge Steve Jones declined to extend it, saying all the counties had likely already certified their results or were about to, and there were other protections in place.

All but 16 of the state's 159 counties had certified their results by Tuesday evening, Secretary of State spokeswoman Candice Broce later said in an email.

Jones said he hopes to rule on the other requests from Abrams' campaign by noon Wednesday.

In a separate case, U.S. District Judge Leigh May on Tuesday ordered Gwinnett County election officials not to reject absentee ballots just because the voter's birth year is missing or wrong, and to count any votes that were cast that way. She also ordered the county to delay certification of its election results until those ballots have been counted.

Secretary of State Robyn Crittenden had issued guidance to county election officials on the absentee ballot issue Monday. Crittenden was appointed by Republican Gov. Nathan Deal last week to replace Kemp, who resigned as secretary of state after declaring victory in the governor's race.

Jones said he will consider whether he should effectively extend May's order to Georgia's other 158 counties. He said that Crittenden's guidance says counties don't have to reject absentee ballots that are missing a year of birth if there's enough other information to verify the voter, but her guidance fails to say they shouldn't reject them. He said that could cause absentee voters to be treated differently, depending on where they live.

But secretary of state's office elections director Chris Harvey testified last week that the state had planned to certify the election results Wednesday, a day after the deadline for counties to certify their results. He said that would allow preparations to begin for any runoff contests, including those already projected in the races for secretary of state and a Public Service Commission seat.

Protests at The Capitol

Meanwhile, protesters, including a state senator, were arrested Tuesday during a demonstration at the Georgia Capitol calling for uncounted ballots to be tallied.

"I'm being arrested because I refused to leave the floor of this building where I'm a state senator," Sen. Nikema Williams said as she was escorted from the building.

"I wasn't yelling. I wasn't chanting. I was standing peacefully beside constituents I represent."

The Georgia Department of Public Safety said a total of 15 people were arrested on charges of disrupting the orderly conduct of official business and taken to the Fulton County jail.

After being released from the jail later Tuesday, Williams said she was targeted as a Black woman. The Abrams campaign called for charges against Williams to be dropped.

The Georgia Constitution states that legislators "shall be free from arrest during sessions of the General Assembly ... except for treason, felony, or breach of the peace."

Unofficial returns show Kemp with a lead just shy of 60,000 votes out of more than 3.9 million cast. Abrams would need a net gain of about 21,000 votes to force a runoff.

The Associated Press has not called the race.

Kemp's campaign has repeatedly called on Abrams to concede, calling her campaign's lawsuit "a disgrace to democracy" that ignores mathematical realities.

The Georgia Republican Party, which on Tuesday joined the secretary of state's office in defending against the lawsuit, said in an emailed statement that Democrats were trying to "sue their way to a win" after losing at the ballot box.

Abrams' campaign manager, Lauren Groh-Wargo, told reporters after the hearing that, "Our quest for basic fairness continues and that is why we want every single vote to be counted here in Georgia."

She accused Kemp, as the state's top elections official, of running a "chaotic" election characterized by long lines and an unusually high number of voters having to cast provisional ballots.