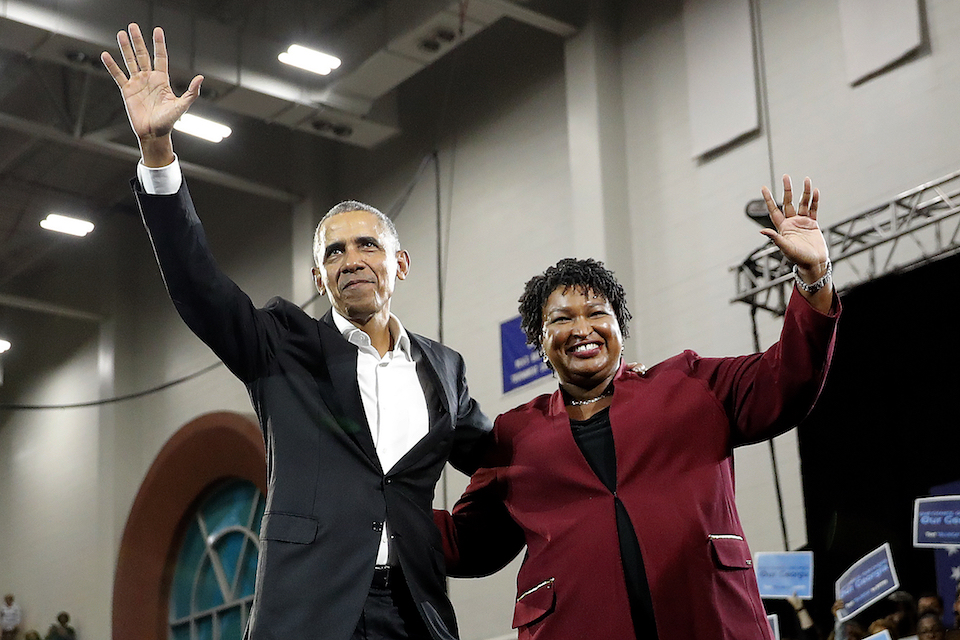 ATLANTA (AP) — Last-minute legal decisions, a racist robocall and a protester wearing a giant chicken suit holding a sign that reads "too chicken to debate."

These are the scenes playing out amid the final furious days of the hotly contested and historic race for Georgia governor between Democrat Stacey Abrams and Republican Brian Kemp.

A robocall apparently from a white supremacist group is injecting racism directly into the race, which has already been fraught with a race-laden debate over ballot access and voter suppression.

Abrams would be the first black female governor in U.S. history.

Kemp, who oversees elections as Georgia's secretary of state, vehemently denies charges that he's used his office to make it harder for minorities to vote.

Abrams and Kemp are both condemning an automated telephone call filled with racist and anti-Semitic statements.

The call, sent to an unknown number of Georgians, impersonates Oprah Winfrey, the billionaire media titan who came to Georgia on Thursday to support Abrams.

The robocall says it was paid for by The Road to Power, a group organized by Scott Rhodes of Idaho.

He has been linked to several other racist robocalls, including a recent effort in Florida, where Democratic nominee Andrew Gillum would become the first black governor in his state's history.

Kemp issued a statement calling the tactic "vile" and "contrary to the highest ideals of our state and country," and condemning "any person or organization that peddles this type of unbridled hate and unapologetic bigotry."

The Abrams camp likewise blasted the move but took a shot at Kemp and his highest profile supporter, President Donald Trump, who is campaigning in Georgia Sunday.

A top Abrams aide said both Kemp and Trump have contributed to a poisonous atmosphere, and that Kemp has been silent on previous racially loaded attacks on Abrams.

"These automated calls are being sent into homes just days before President Trump arrives, reminding voters exactly who is promoting a political climate that celebrates this kind of vile, poisonous thinking," said Abrams' spokeswoman Abigail Collazo. 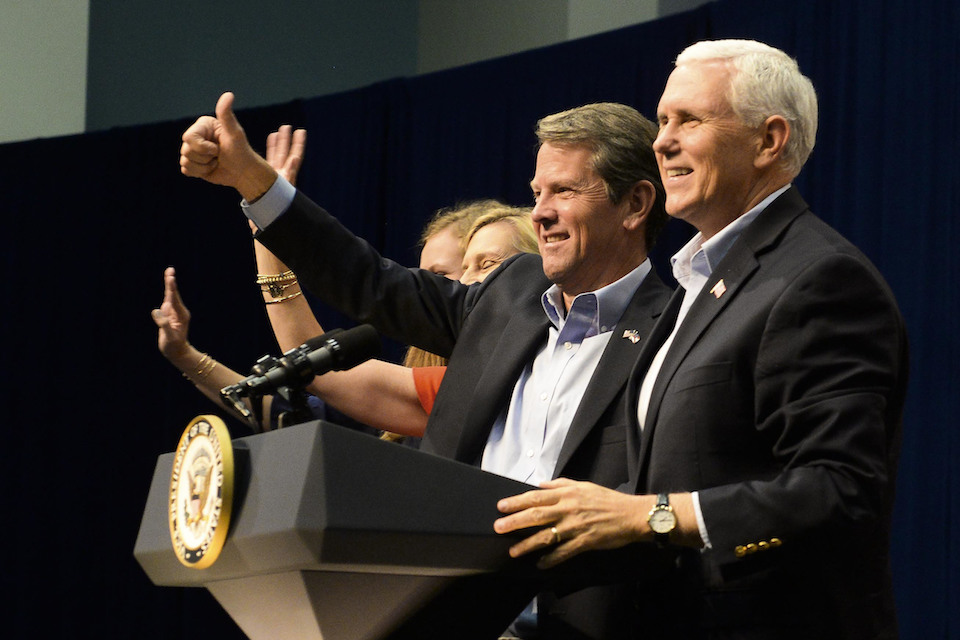 Abrams sidestepped the issue Saturday in brief public remarks as she greeted voters at an Atlanta shopping complex along with her local congressman, civil rights icon John Lewis.

"Georgia has long been on a path of change and evolution," Abrams said. But she also said the election is about issues like expanding Medicaid insurance and focusing state spending on public education, job training and small business startups.

"I'm the only candidate with a plan to get that done and to do that without vitriol, without vilifying people," she added.

Lewis, the 78-year-old congressman who as a young man was severely beaten by police as he fought for voting rights in the Jim Crow South, put Georgia's choice in the broadest context:

Kemp did not address the robocalls at his only scheduled campaign stop Saturday at a Cuban restaurant in a diverse north-Atlanta suburb.

Kemp told the packed crowd of supporters that the race for governor was a simple choice: one between continued economic prosperity under Republican leadership, or a turn to "socialism" under Democrats.

Kemp said the election was about "this generation and generations to come and the kind of state that we leave them."

He then blasted Abrams' policy pitches on health care and education.

"Too chicken to debate"

The Kemp event was also hit by a number of protesters.

Two men protesting Kemp's immigration policy while Kemp was onstage were forcibly removed from the restaurant.

As a TV crew from MSNBC tried to film the hecklers being removed, a Kemp supporter physically blocked their path and the view of their lens.

And someone out front was wearing a giant chicken suit holding a sign that reads "too chicken to debate," alluding to Kemp withdrawing from a debate scheduled Sunday in favor of appearing in Macon with President Donald Trump.

Much of the final stretch of the race was consumed by a bitter battle over race and access to the polls.

Tensions grew after an Associated Press report in early October that more than 53,000 voter applications — nearly 70 percent of them from black applicants — were on hold with Kemp's office ahead of the election.

Many of the applications were flagged for failing to pass the state's "exact match" verification process, which requires that identification information on voter registration applications precisely match information already on file.

Kemp's office says that eligible voters on the "pending" list can still vote if they bring a proper ID that substantially matches their registration information.

He called the controversy "manufactured."

But critics say county officials aren't always trained to make the proper determination and the system can be particularly hard to navigate for recently naturalized citizens.

In response to a lawsuit brought by civil rights groups, a judge on Friday ruled the state unfairly burdens about 3,100 possible voters whose registration was flagged for citizenship issues.

She ruled that Georgia must immediately start allowing poll managers — not just deputy registrars — to clear flagged voters who show proof of citizenship.

In a statement, Kemp said the lawsuit forced the state "to waste time and taxpayer dollars for the judge to tell us to do something that we already do."

For AP's complete coverage of the U.S. midterm elections: http://apne.ws/APPolitics