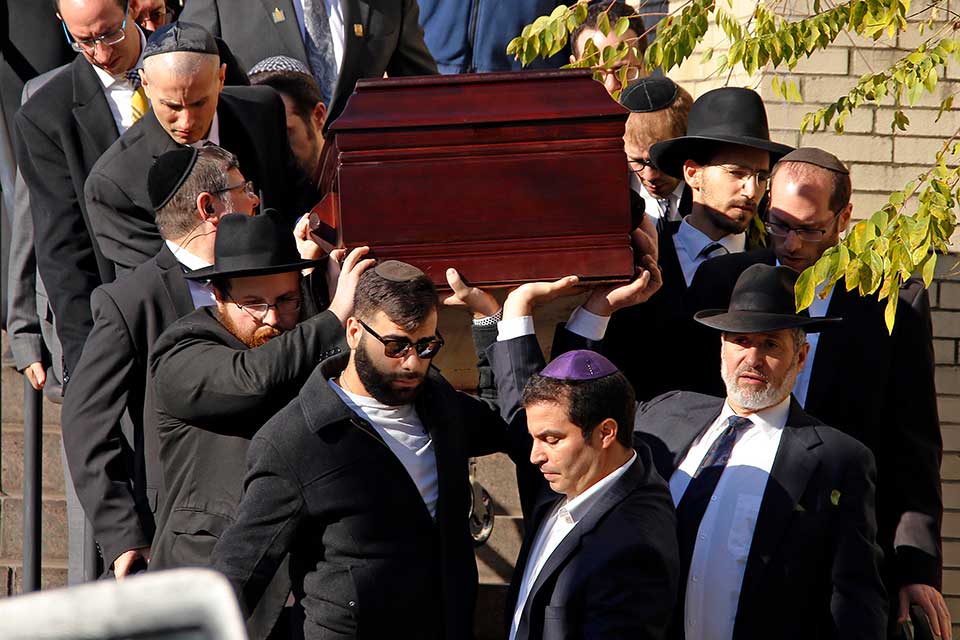 PITTSBURGH — With two more funerals set for Thursday, the anti-Semitic truck driver accused of gunning down 11 people at a Pittsburgh synagogue pleaded not guilty to federal charges for the deadliest attack on Jews in American history.

Robert Bowers is charged with 44 counts, including hate crimes. Federal prosecutors have previously indicated they plan to seek the death penalty. The charges were announced on the second day of funerals for the victims.

"Today begins the process of seeking justice for the victims of these hateful acts, and healing for the victims' families, the Jewish community, and our city," U.S. Attorney Scott Brady said in a statement. "Our office will spare no resource, and will work with professionalism, integrity and diligence, in a way that honors the memories of the victims."

Bowers, who is stocky and square-faced with salt-and-pepper, closely cropped hair, frowned as the charges were read but did not appear to have a reaction as a federal prosecutor announced he could face a death sentence. He told a prosecutor he had read the indictment.

One of his federal public defenders, Michael Novara, said Bowers pleaded not guilty, "as is typical at this stage of the proceedings."

Bowers had been set for a preliminary hearing on the evidence, but federal prosecutors instead took the case to a grand jury.

The panel issued the indictment on Tuesday as funerals continued for the victims.

Melvin Wax, 87, Irving Younger, 69, and Joyce Fienberg, 75, were being laid to rest as part of a weeklong series of services.

"It can't be fixed," Robert Libman said at the funeral of Fienberg, his sister, clutching his chest as he described the pain of losing her.

"My sister is dead. My sister was murdered. There was no one I know like her. Pure goodness. ... She was the most tolerant and gentle person that I've ever known."

Her sons, Anthony, of Paris, and Howard, of Vienna, Virginia, said she spent five years caring for their father as he battled cancer, then after his death a few years ago, devoted more of her time and energy to Tree of Life.

"My mom would be very angry that her funeral wasn't able to be at Tree of Life, and that her friends lost Saturday couldn't be here," Howard Fienberg said.

The funerals for Wax and Younger were to be held later Tuesday.

Six people were wounded in the attack, including four police officers, two of whom remained hospitalized with gunshot wounds. Two congregants were still in the hospital, one in critical condition.

In a bit of good news, hospital officials said the two most seriously injured shooting victims are improving.

A police officer and a congregant remain in intensive care but "are doing much better now," Dr. Donald Yealy, chairman of emergency medicine at UPMC, said Wednesday. "I think overall the prognoses are good now. But each of them, in a varying way, will have a different trajectory and likely will require a series of ongoing care."

The first three funerals were held on Tuesday, with thousands of mourners jamming a synagogue, a Jewish community center and a third, undisclosed site for the funerals of a beloved family doctor, a pillar of the congregation, and two intellectually disabled brothers in the 50s who were known as "the boys."

Cecil and David Rosenthal were "beautiful souls" who had "not an ounce of hate in them — something we're terribly missing today," Rabbi Jeffrey Myers, a survivor of the massacre, said at their funeral at Rodef Shalom, one of the city's oldest and largest synagogues.

The brothers were both active at Tree of Life, with Cecil the more gregarious of the two, a man with a booming voice who was known as the "mayor" of the city's Squirrel Hill neighborhood and the "town crier" for the gossip he managed to gather.

On Tuesday afternoon, after the day's funerals were over, Trump and first lady Melania Trump arrived in Pittsburgh to shouting, chanting protesters with signs such as "It's your fault" and "Words matter," a reference to allegations that Trump's combative language has emboldened bigots. Pennsylvania Gov. Tom Wolf and Pittsburgh Mayor Bill Peduto, both Democrats, declined to join him during the visit.

"He didn't pull the trigger, but his verbiage and actions don't help," said Squirrel Hill resident Paul Carberry, 55, wearing anti-Trump patches on his hat and jacket.

Another Squirrel Hill resident, Shayna Marcus, a Jewish 34-year-old nurse and Trump supporter who hoped to catch sight of the presidential motorcade, said: "I don't think focusing on Trump is the answer, or on politics."

One person was arrested during the protests.

During their visit, Trump and the first lady lit candles at Tree of Life for the victims and laid white roses as well as stones for each of the dead, a Jewish burial tradition. They later went to a hospital to visit with survivors.

They were joined by Trump's daughter Ivanka and her husband, Jared Kushner, as well as Myers, the Tree of Life rabbi, and Israeli Ambassador Ron Dermer.

A private funeral was conducted Tuesday for Daniel Stein, the 71-year-old men's club president at Tree of Life. And a service with more than 1,000 people was held for Dr. Jerry Rabinowitz at the Jewish Community Center in Squirrel Hill.

The 66-year-old Rabinowitz was a go-to doctor for HIV patients in the epidemic's early and desperate days, a physician who always hugged his patients as they left his office.

"A lot of people are feeling really angry about this. A lot of rage built up inside about this, because of it being a hate crime. Don't get me wrong; I do. But I'm so overwhelmed with sadness right now that I can't even be angry right now," said Robin Faulkner, whose family had seen Rabinowitz for 30 years and counted him as a dear friend. "It's just such a loss. Just tragic."

Among the mourners at the Rosenthal brothers' funeral was Dr. Abe Friedman, who typically sat in the back row of Tree of Life with the two men but was late to synagogue on Saturday and was not there when the gunman opened fire.

As he stood in line at the funeral, Friedman wondered why he had been spared.

"Why did things fall into place for me?" he asked. "I usually sit in the back row. In the last row, everyone got killed."

Jared Younger of Los Angeles told mourners that he waited for hours Saturday for his father to pick up his phone or let them know he was all right. The dread built all day until his sister learned their father, Irving Younger, had indeed been shot and killed.

"That waiting stage was just unbearable," Jared Younger said at his father's funeral Wednesday. "Saturday was the most lonely day of my life."

Funerals were being held Thursday for Bernice and Sylvan Simon, husband and wife, and Dr. Richard Gottfried, a dentist who worked part-time at a clinic treating refugees and immigrants. The oldest victim, 97-year-old Rose Mallinger, will be honored at the last service Friday. Her daughter was injured in the attack.

Friends recalled Irving Younger, 69, as a "kibbitzing, people-loving" man. He was one of the first people Rabbi Jeffrey Myers met when he came to town last year from New Jersey to lead Tree of Life.

Myers, who survived the massacre, is presiding over five funerals for seven congregants this week. He ran a few minutes late to Younger's service because he was still at the burial for another victim, Joyce Fienberg.

As Younger's service was wrapping up, Myers momentarily forgot to read a letter to the family that another rabbi had sent.

"After preparing for five funerals, you get a little verklempt," Myers said.

Tree of Life remains a crime scene. Rabbis and other volunteers have been cleaning the temple to remove all bodily traces from the 11 victims, following Jewish law regarding death and burial.