Mexican Towns Rally for Migrants who Try to be Good Guests 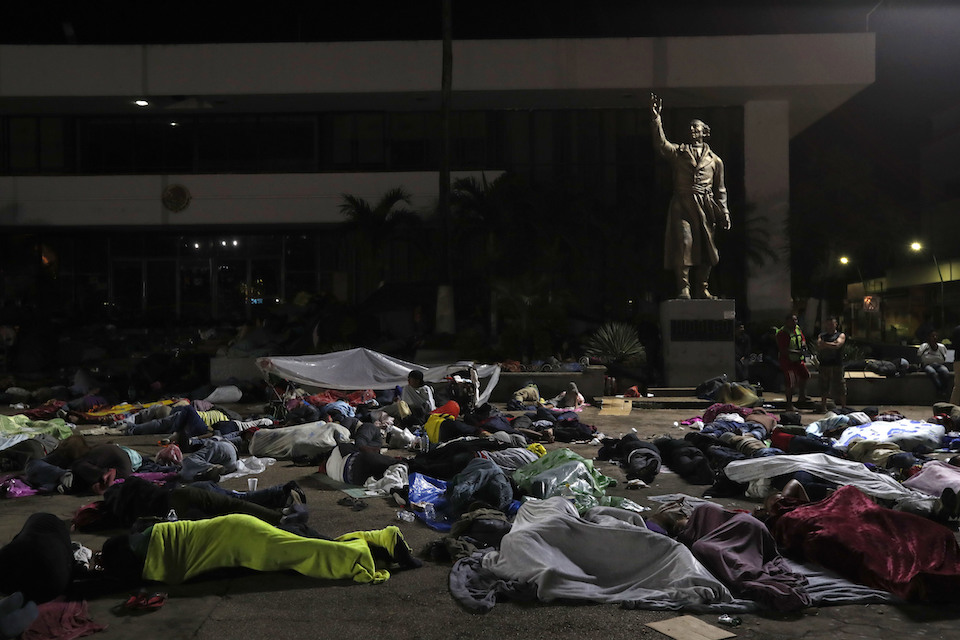 MAPASTEPEC, Mexico (AP) — As long lines of migrants shuffled past his cheese shop Thursday on the far-distant journey north, Cesar Cabuqui was ready, handing out scores of homemade bean and cheese sandwiches and bags of water.

He was far from the only one moved to help the masses of women, men and children as they made their way on foot between the far southern Mexican towns of Mapastepec and Pijijiapan — a 30-mile trek.

"They are human beings," Cabuqui said.

"You have to do something to help them."

Southern Mexico's Chiapas state is home to some of the country's most impoverished communities.

Yet towns suddenly faced with an influx of thousands of people bedding down in overflowing plazas and parks have organized to offer them shelter, medical treatment and donations as best they can.

When an estimated 4,000 to 5,000 migrants walked into Mapastepec on Wednesday, the municipality of 45,000 residents was ready.

They had been following the caravan's progress for days.

The city government erected tents around the main square offering everything from medical attention to donated clothing and baby formula.

Some 110 migrants slept overnight at the Casa de Cultura, where a woman named Concepcion Ponce Aguilar works, and 620 more used its restrooms.

"It is satisfying to have helped them," Aguilar said.

"It leaves a good taste in one's mouth."

Migrants helping with clean up

Grateful for the hospitality, many of the migrants have tried to be respectful visitors. 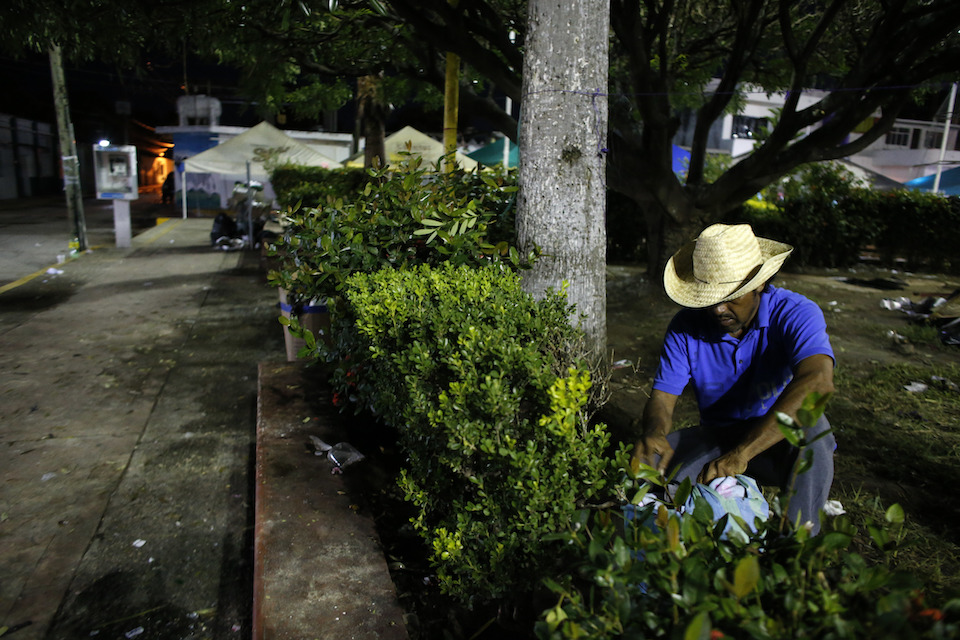 Jose Reyneri Castellanos, from El Progreso, Honduras, hang back behind the rest of the caravan with his wife and two young sons to help sweep and tidy up, just as they’ve done at each stop, figuring it well help ensure a continued warm reception as they continue north to the U.S. border, in Mapastepec, Mexico, Thursday, Oct. 25, 2018. “I think it is important to leave the community and the city clean,” Castellanos said. (AP Photo/Rebecca Blackwell)

Jose Reyneri Castellanos, from El Progreso, Honduras, hung back behind the rest of the caravan with his wife and two young sons to help sweep and tidy up — just as they've done at each stop, figuring it well help ensure a continued warm reception as they head north.

"I think it is important to leave the community and the city clean," Castellanos said.

As the migrants departed before dawn Thursday, the garbage left behind was neatly gathered around full bins or littered the ground in places where no receptacles were available.

As the sky brightened, a brigade of volunteers together with city workers and migrants swept the trash into mounds and bags that were collected by latex-gloved workers.

"I really doubt they are criminals"

Alvaro Ruiz Dominguez was among the residents who welcomed migrants onto his property.

Ruiz let them use his bathrooms, and a doctor who occupies one of the five storefronts he owns provided free medical care.

As the last of his one-night guests were gathering their things, Ruiz swept the parking lot and said the migrants had behaved well and made an effort to help clean up.

He estimated 250 had slept in the lot and in a side yard.

By 5 a.m. there was little sign that so many people had camped there.

"I really doubt they are criminals," Ruiz said, referring to claims by U.S. President Donald Trump that gang members and "Middle Easterners," were mixed in with the caravan.

Trump later acknowledged there was no proof, and Associated Press journalists traveling with the caravan have seen no sign of that.

Trump has been stoking fears about the caravan and illegal immigration to rally his Republican base ahead of the hotly contested Nov. 6 midterm elections, repeatedly hitting Democrats on the issue.

Defense Secretary Jim Mattis was expected to sign an order as early as Thursday to send 800 or more additional troops to the southern border to support the Border Patrol, according to a U.S. official, who spoke on condition of anonymity because he was not authorized to speak publicly because the details had not yet been finalized.

The caravan is still some 1,000 miles from the nearest border crossing at McAllen, Texas, but the journey could be twice that if the migrants head to the Tijuana-San Diego crossing, the destination of a smaller caravan earlier this year.

Only about 200 in that group ever made it.

This one has begun to thin, with authorities saying 1,740 have applied for refuge in Mexico and hundreds more have taken up offers of bus rides back to Honduras.

Sickness, exhaustion and police harassment have also helped whittle down their numbers.

Mexico's federal government hasn't given the migrants on the road a single meal, bathroom or bottle of water, reserving any aid only for those who turn themselves in to apply for visas or be deported.

Immigration officials appeared to be intervening more aggressively with the migrants' movements amid the sweltering 90-degree heat.

A taxi driver in Mapastepec said he had seen immigration agents force migrant passengers out of cabs at a checkpoint.

An official from the country's Human Rights Commission said migrants could go through if they were in vans or trucks that offered them free rides, but if they had paid they would have to get out because of insurance regulations.

A family in fear

Cesar Antonio Perez Rodriguez, from El Salvador, said agents had forced him, his pregnant wife, Delmy Roxana Martinez, and their 3-year-old son out of a van the previous day.

They were brought to an immigration office filled with more than 30 migrants. Hours passed with no explanation.

Several in the group became agitated and pushed their way through a door, he said. In the commotion, Perez managed to flee but his wife and child were left behind.

As he ran he looked back to see her holding their son and crying, blocked by agents with batons.

On Thursday, at an internet cafe in Mapastepec, he desperately tried to contact his wife's relatives via Facebook to find out if they had heard from her.

He had no money and his wife had their only cell phone, a Mexican number he didn't know.

"I don't want to lose my son," Perez said, choking back tears.

The family left San Salvador more than a month ago after a gang threatened to kill them, Perez said, a tale common to many in the caravan who are fleeing violence and poverty in Central America.

They traveled 287 miles to Tapachula, in southern Mexico, before running out of money.

They were surviving on little more than mangos and had applied for refugee status in Mexico when the caravan passed last week, and the family decided joining it was their best chance.

We only want to give our kids a better future

On Thursday, the long column stretched for miles along the highway.

Families with young children packed sidewalks asking for donations and rides.Arriving in Pijijiapan, thousands camped under plastic tarps in front of a church.

Such caravans have taken place regularly, if on a smaller scale, over the years, but Trump has seized on the phenomenon this year.

Candy Guillermo, 37, said she had heard from others in the caravan that Trump intended to send more U.S. troops to the border.

A single mother of four, she was surprised the leader of such a powerful country would find her and the scores of other families traveling alongside her a threat.

"It surprises me because there are children here. President Trump should be more humanitarian," Guillermo said, wiping sweat from her brow.

"We only want to give our kids a better future."