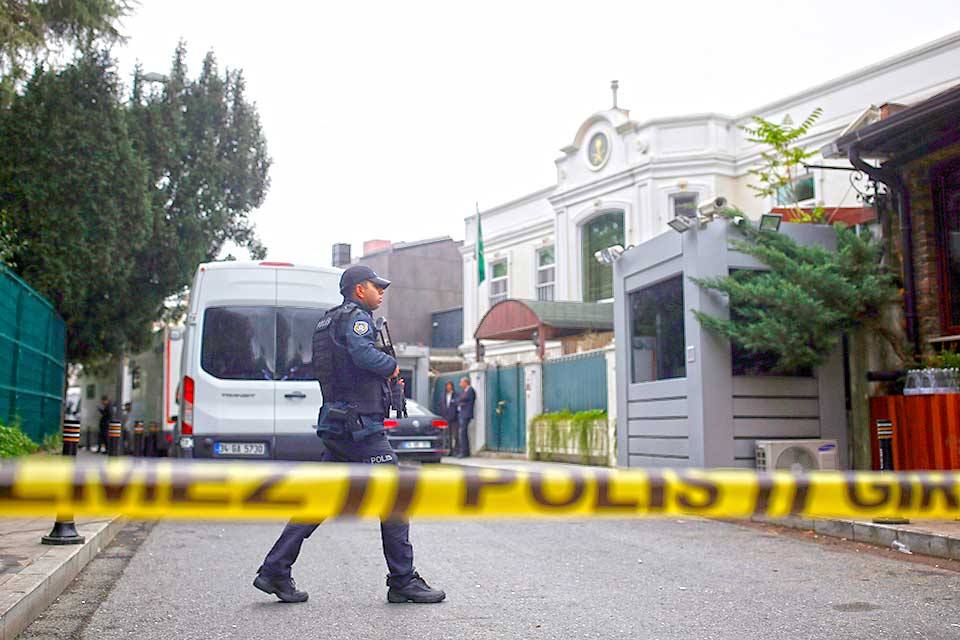 ISTANBUL (AP) — Police searching the Saudi Consulate found evidence that Saudi writer Jamal Khashoggi was killed there, a high-level Turkish official said Tuesday, and authorities appeared ready to also search the nearby residence of the consul general after the diplomat left the country.

The comment by the Turkish official to The Associated Press further intensified the pressure on Saudi Arabia to explain what happened to Khashoggi, who vanished Oct. 2 while visiting the consulate to pick up paperwork he need to get married.

The Washington Post has published a new column by Jamal Khashoggi in which he warns that governments in the Middle East "have been given free rein to continue silencing the media at an increasing rate." The Post published the column Wednesday, more than two weeks after Khashoggi was last seen entering the Saudi consulate in Istanbul.

U.S. Secretary of State Mike Pompeo traveled to Saudi Arabia to talk to King Salman and his son, the 33-year-old Crown Prince Mohammed bin Salman, about the fate of the journalist who wrote critically about the Saudis for the Washington Post.

While it was all smiles and handshakes in Riyadh, one prominent Republican senator said he believed that the crown prince, widely known as MBS, had Khashoggi "murdered."

"This guy has got to go," said Sen. Lindsey Graham, R-South Carolina, speaking on Fox television.

"Saudi Arabia, if you're listening, there are a lot of good people you can choose, but MBS has tainted your country and tainted himself."

Saudi officials have called Turkish allegations that a team of 15 Saudi agents killed Khashoggi "baseless," but U.S. media reports suggested that the kingdom may acknowledge the writer was killed at the consulate, perhaps as part of a botched interrogation.

The close U.S. ally is ruled entirely by the Al Saud monarchy, and all major decisions in the ultraconservative kingdom are made by the royal family.

The high-level Turkish official told the AP that police found "certain evidence" of Khashoggi's slaying at the consulate, without elaborating. The official spoke on condition of anonymity because the investigation was ongoing.

Consul General Mohammed al-Otaibi left Turkey Tuesday afternoon, state media reported, just as police began putting up barricades around his official residence. Saudi Arabia did not immediately acknowledge he had left or offer a reason for his departure.

Earlier in the day, U.N. human rights chief Michelle Bachelet said the "inviolability or immunity" of people or premises granted under the 1963 Vienna Convention on Consular Relations "should be waived immediately." That convention covers diplomatic immunity, as well as the idea that embassies and consulates sit on foreign soil in their host countries.

"Given there seems to be clear evidence that Mr. Khashoggi entered the consulate and has never been seen since, the onus is on the Saudi authorities to reveal what happened to him," Bachelet said.

Turkey had wanted to search the consulate for days. Permission apparently came after a late Sunday night call between King Salman and Turkish President Recep Tayyip Erdogan. Certain areas of the consulate were to remain off-limits, although officials would be able to inspect surveillance cameras, Turkish media reported.

Erdogan told journalists Tuesday that police sought traces of "toxic" materials and suggested parts of the consulate had been recently painted, without elaborating.

In Riyadh, Saudi Foreign Minister Adel al-Jubeir greeted Pompeo at the airport. The former CIA chief didn't make any remarks to the media.

Soon after, Pompeo arrived at a royal palace, where he thanked King Salman "for accepting my visit on behalf of President (Donald) Trump" before the two went into a closed-door meeting. Pompeo then met a smiling Prince Mohammed, the heir apparent to the throne of the world's largest oil exporter.

"We are strong and old allies," the prince told Pompeo. "We face our challenges together — the past, the day of, tomorrow."

Pompeo was to have a dinner Tuesday night with Prince Mohammed and was expected to fly to Turkey on Wednesday.

Trump previously warned of "severe punishment" for the kingdom if it was found to be involved in Khashoggi's disappearance, which has spooked investors.

Trump's warning drew an angry response Sunday from Saudi Arabia and its state-linked media, including a suggestion that Riyadh could wield its oil production as a weapon. The U.S. president has been after King Salman and OPEC to boost production to drive down high oil prices, caused in part by the coming re-imposition of oil sanctions on Iran.

On Monday, however, Trump offered a different theory after speaking by telephone with King Salman.

"It sounded to me like maybe these could have been rogue killers," Trump said.

"I mean, who knows? We're going to try getting to the bottom of it very soon, but his was a flat denial."

The New York Times and the Washington Post have reported, citing anonymous sources, that Saudi officials may soon acknowledge Khashoggi's slaying at the consulate but blame it on a botched intelligence operation.

That could, like Trump's comments, seek to give the kingdom a way out of the global firestorm of criticism over Khashoggi's fate.

"The effort behind the scenes is focused on avoiding a diplomatic crisis between the two countries and has succeeded in finding a pathway to deescalate tensions," said Ayham Kamel, the head of the Eurasia Group's Mideast and North Africa division.

"Riyadh will have to provide some explanation of the journalist's disappearance, but in a manner that distances the leadership from any claim that a decision was made at senior levels to assassinate the prominent journalist."

WASHINGTON (AP) — Secretary of State Mike Pompeo said he told President Donald Trump on Thursday that Saudi Arabia should be given a few more days to complete its investigation into the disappearance of journalist Jamal Khashoggi before the U.S. decides "how, or if" to respond.

Pompeo, who spoke with reporters on the White House driveway after briefing Trump on his talks with leaders in Saudi Arabia and Turkey, said Turkey also promised to share the results of its own investigation with the Saudis.

Pompeo said he believes those combined efforts will produce "a complete picture" of what happened to Khashoggi, a Saudi journalist living in the U.S. who had been critical of the kingdom. Khashoggi has not been seen since he entered the Saudi consult in Istanbul more than two weeks ago and is feared dead.

Meanwhile, Treasury Secretary Steve Mnuchin announced Thursday that he will not attend a previously scheduled Saudi investment conference. Many top business executives have pulled out of the conference, which Saudi Arabia had hoped to use to boost its global image.

Mnuchin said the decision was made after the White House meeting with Trump and Pompeo.

Pompeo told reporters he stressed to the Saudis that the U.S. takes "very seriously" Khashoggi's disappearance.

He said they also made clear to him that they understand "the serious nature" of the circumstances surrounding the writer's disappearance.

He said the Saudis assured him that they will conduct a "complete, thorough investigation of all the facts."

Speaking of his conversations in Riyadh with Saudi King Salman and Saudi Crown Prince Mohammed bin Salman, Pompeo said: "I told President Trump this morning that we ought to give them a few more days to complete that so that we, too, have a complete understanding of the facts surrounding that, at which point we can make decisions about how, or if, the United States should respond to the incident surrounding Mr. Khashoggi."

Pompeo also discussed the case with Turkish President Recep Tayyip Erdogan during a stop in Istanbul.

In his brief comments to reporters, Pompeo also stressed the "longstanding strategic relationship" between the U.S. and Saudi Arabia.