US Pastor Freed from Turkey Prays with Trump in Oval Office 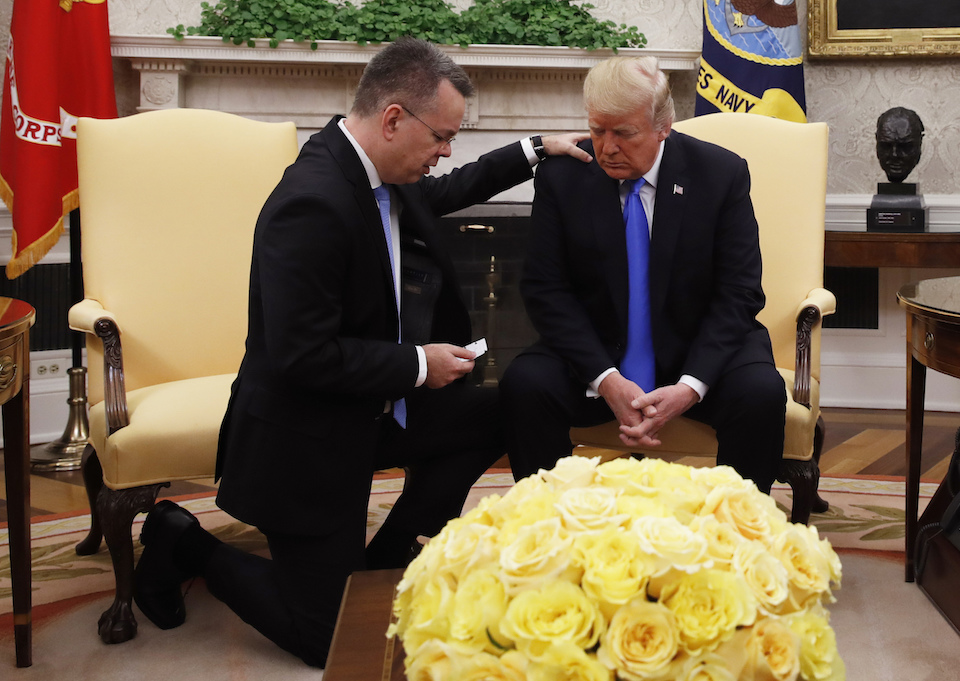 WASHINGTON (AP) — Freed American pastor Andrew Brunson fell to one knee in the Oval Office and placed his hand on President Donald Trump's shoulder in prayer on Saturday, asking God to provide the president "supernatural wisdom to accomplish all the plans you have for this country and for him."

Trump welcomed Brunson to the White House to celebrate his release from nearly two years of confinement in Turkey, which had sparked a diplomatic row with a key ally and outcry from U.S. evangelical groups.

Brunson returned to the U.S. aboard a military jet shortly before meeting the president. He was detained in October 2016, formally arrested that December and placed under house arrest on July 25 for health reasons.

"From a Turkish prison to the White House in 24 hours, that's not bad," Trump said.

Brunson's homecoming amounts to a diplomatic — and possibly political — win for Trump and his evangelical base.

Coming on the heels of the confirmation of a conservative justice to the Supreme Court, Brunson's return is likely to leave evangelical Christians feeling good about the president and motivated get to the polls in the Nov. 6 midterm elections.

Brunson appeared to be in good health and good spirits. When he asked Trump if he could pray for him, the president replied, "Well, I need it probably more than anyone ese in this room, so that would be very nice, thank you."

Brunson left his chair beside Trump, kneeled and placed a hand on the president's shoulder.

As Trump bowed his head, Brunson asked God to "give him supernatural wisdom to accomplish all the plans you have for this country and for him. I ask that you give him wisdom in how to lead this country into righteousness."

He continued: "I ask that you give him perseverance, and endurance and courage to stand for truth.

"I ask that you to protect him from slander from enemies, from those who would undermine.

"I ask that you make him a great blessing to this country.

"Fill him with your wisdom and strength and perseverance. And we bless him.

"May he be a great blessing to our country. In Jesus' name, we bless you. Amen." 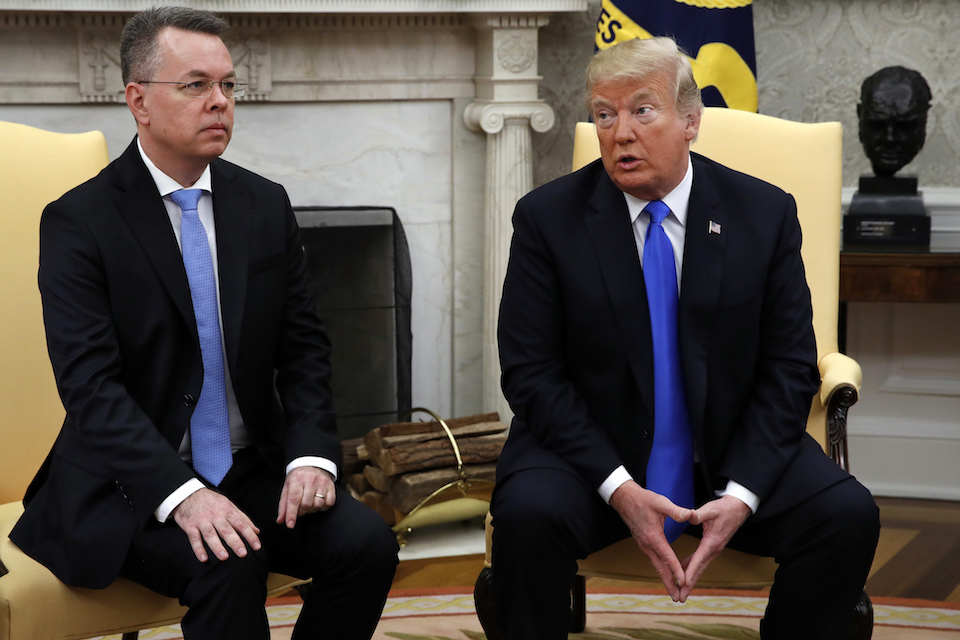 PHOTO: President Donald Trump meets with American pastor Andrew Brunson, left, in the Oval Office of the White House, Saturday Oct. 13, 2018, in Washington. Brunson returned to the U.S. around midday after he was freed Friday, from nearly two years of detention in Turkey. (AP Photo/Jacquelyn Martin)

Brunson, originally from Black Mountain, North Carolina, had lived in Turkey with his family for more than two decades and led a small congregation in the Izmir Resurrection Church.

He was accused of committing crimes on behalf of Kurdish militants and to aid a Pennsylvania-based Muslim cleric, Fethullah Gulen, accused by Turkey of engineering the failed coup.

He faced up to 35 years in jail if convicted of all the charges against him.

Trump maintained there was no deal for Brunson's freedom, but the president dangled the prospect of better relations between the U.S. and its NATO ally.

"We do not pay ransom in this country," Trump said.

Where previous administrations kept negotiations over U.S. prisoners held abroad close to the vest, Trump has elevated them to causes célèbres, striking a tough line with allies and foes alike.

Trump thanked Turkey's president, Recep Tayyip Erdogan, who had resisted the demands of Trump and other high-level U.S. officials for Brunson's release.

Erdogan had insisted that his country's courts are independent, though he previously had suggested a possible swap for Brunson.

The U.S. had repeatedly called for Brunson's release and, this year, sanctioned two Turkish officials and doubled tariffs on steel and aluminum imports citing in part Brunson's plight.

Trump said the U.S. greatly appreciated Brunson's release and said the move "will lead to good, perhaps great, relations" between the U.S. and fellow NATO ally Turkey, and said the White House would "take a look" at the sanctions.

Trump asked Brunson and his family which candidate they voted for in 2016, saying he was confident they had gone for him.

"I would like to say I sent in an absentee ballot from prison," Brunson quipped.

Evangelical voters overwhelmingly voted for the president despite discomfort with his personal shortcomings, in large part because he pledged to champion their causes, from defending persecuted Christians overseas to appointing conservative justices to the Supreme Court.

In the space of seven days, less than a month from the midterm elections, Trump delivered on both fronts.Prominent evangelical leaders such as Tony Perkins have championed Brunson's case, as has Vice President Mike Pence.

First word of Brunson's arrival back on American soil Saturday came from Perkins, president of the Family Research Council.

Perkins tweeted just after noon that he had landed at a military base outside Washington with Brunson and his wife, Norine.

Erdogan said on Twitter that he hoped the two countries will continue to cooperate "as it befits two allies."

Erdogan also called for joint efforts against terrorism, and he listed the Islamic State group, Kurdish militants and the network of a U.S.-based Muslim cleric whom Turkey blames for a failed coup in 2016.

Relations between the countries have become severely strained over Brunson's detention and a host of other issues.

A Turkish court on Friday convicted Brunson of having links to terrorism and sentenced him to just over three years in prison, but released the 50-year-old evangelical pastor because he had already spent nearly two years in detention.

An earlier charge of espionage was dropped.Hours later, Brunson was flown out of Turkey, his home for more than two decades.

He was taken to a U.S. military hospital in Landstuhl, Germany, for a medical checkup.

"I love Jesus. I love Turkey," an emotional Brunson, who had maintained his innocence, told the court at Friday's hearing.

Brunson's release could benefit Turkey by allowing the government to focus on an escalating diplomatic crisis over Jamal Khashoggi, a Saudi contributor to The Washington Post who has been missing for more than a week and is feared dead after entering the Saudi consulate in Istanbul.

Turkish officials suspect Khashoggi, a critic of the Saudi government, was killed in the consulate; Saudi officials deny it.

Trump maintained the two cases were not linked, saying Brunson's release amid the Khashoggi investigation was "strict coincidence.

"Turkey may also hope the U.S. will now lift the tariffs on Turkish steel and aluminum imports, a move that would inject confidence into an economy rattled by high inflation and foreign currency debt.

But Brunson's release doesn't resolve disagreements over U.S. support for Kurdish fighters in Syria, as well as a plan by Turkey to buy Russian surface-to-air missiles.

Turkey is also frustrated by the refusal of the U.S. to extradite Gulen.