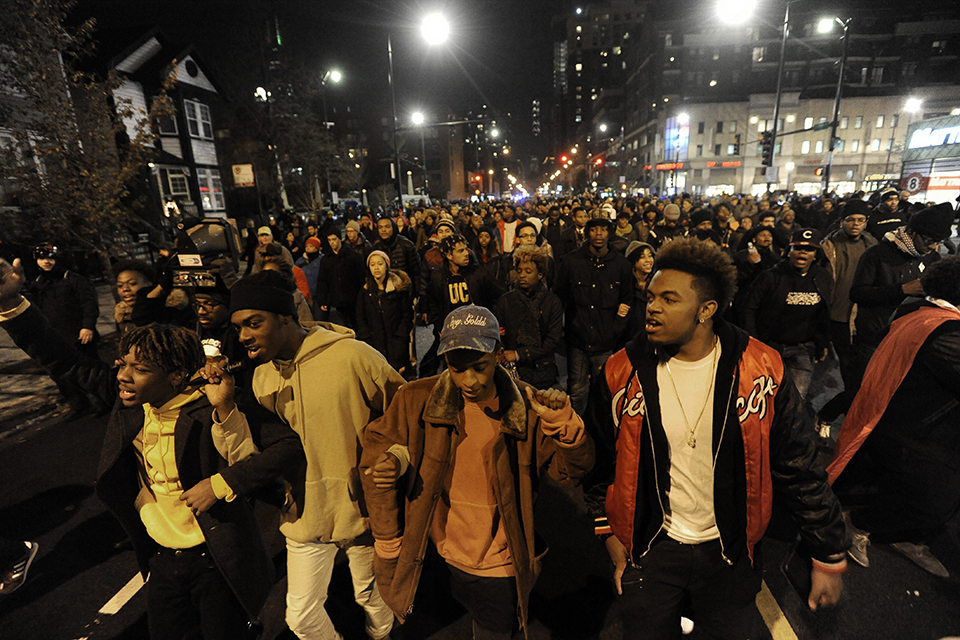 Van Dyke was charged with first degree-murder in the October 2014 killing, a charge that requires a finding that the shooting was unnecessary and unreasonable. The judge told jurors the second-degree charge was also available, requiring them to find Van Dyke believed his life was in danger but that the belief was unreasonable.

Jurors also convicted him of aggravated battery, but acquitted him of official misconduct. It's the first time in half a century that a Chicago police officer has been convicted of murder for an on-duty death.
McDonald was carrying a knife when Van Dyke fired 16 shots into the 17-year-old as he walked away from police.

Second-degree murder usually carries a sentence of less than 20 years.

By far the most serious charge Van Dyke, 40, faced was first-degree murder, which carries a maximum sentence of life in prison.

Van Dyke was the first Chicago police officer to be charged with murder for an on-duty shooting in more than 50 years. That case, which also involved an officer shooting someone with a knife, ended in conviction in 1970.

The verdict is the latest chapter in a story that has made headlines since a judge ordered the release of squad car video of the shooting in November 2015. The case also put the city at the center of the national conversation about police misconduct and excessive force.

The 12-person jury included just one African American member, although Blacks make up one-third of Chicago's population. The jury also had seven Whites, three Hispanics and one Asian American.
Officers had McDonald largely surrounded on a city street and were waiting for someone to arrive with a stun gun to use on the teenager when Van Dyke arrived, according to testimony and video. The video, played repeatedly at trial, shows Van Dyke opening firing. McDonald spins, then crumples to the ground. Van Dyke continues to shoot when the 17-year-old is lying in the street. At times, smoke can be coming from his body, and one officer who was there that night testified that the smoke was actually gunfire hitting the teen.

Prosecutors and defense attorneys argued over what the video actually proved.

But Van Dyke and his attorneys maintained that the video didn't tell the whole story.

His attorneys had portrayed Van Dyke as being "scared' by the young man who he knew had already punctured a tire of a squad car with the knife. Van Dyke testified that the teen was advancing on him, ignoring his shouted orders to drop the knife. Van Dyke conceded that did actually step toward McDonald and not away from the teen, as Van Dyke had initially claimed. But the officer maintained the rest of his account, saying: "The video doesn't show my perspective."

Van Dyke had been on the force for 13 years when the shooting happened. According to a database that includes reports from 2002 to 2008 and 2011 until 2015, he was the subject of at least 20 citizen complaints — eight of which alleged excessive force. Though he was never disciplined, a jury did once award $350,000 to a man who filed an excessive force lawsuit against him. Van Dyke testified that McDonald was the first person he ever shot.

To boost their contention that McDonald was dangerous, defense attorneys built a case against the teenager, who had been a ward of the state for most of his life and wound up in juvenile detention after an arrest for marijuana possession in January 2014. Among those testifying were several current or former employees at the Cook County Juvenile Temporary Detention Center who said they had violent run-ins with McDonald. They also pointed to an autopsy that showed McDonald had the hallucinogenic drug PCP in his system.

Prosecutors stressed that Van Dyke was the only officer to ever fire a shot at McDonald.

They called multiple officers who were there that night as they sought to chip away at the "blue wall of silence" long associated with the city's police force and other law enforcement agencies across the country.

Three officers, including Van Dyke's partner that night, Joseph Walsh, have been charged with trying conspiring to cover up and lie about what happened to protect Van Dyke. They have all pleaded not guilty.

Even before the trial, the case had already had an impact on law enforcement in Chicago. The city's police superintendent and the county's top prosecutor both lost their jobs — one fired by the mayor and the other ousted by voters. It also led to a U.S. Justice Department investigation that found a "pervasive cover-up culture" and prompted plans for far-reaching police reforms.

A week before jury selection, Mayor Rahm Emanuel announced he would not seek a third term, although his office insisted the case had nothing to do with his decision. He had faced criticism that he fought the release of the video until after his re-election in April 2015.

Ahead of the verdict, the city had prepared for the possibility of the kind of massive protests that followed the release of the video in November 2015, with an extra 4,000 officers being put on the streets.
The issue of race permeated the case, though it was rarely raised at trial. One of the only instances was during opening statements, when special prosecutor Joseph McMahon told the jurors that Van Dyke didn't know anything about McDonald's past when he encountered him that night.

"What we do know, what he (Van Dyke) did see, was a black boy walking down the street... having audacity to ignore the police," McMahon said.

Van Dyke's lead attorney Dan Herbert countered: "Race had absolutely nothing to do with this."