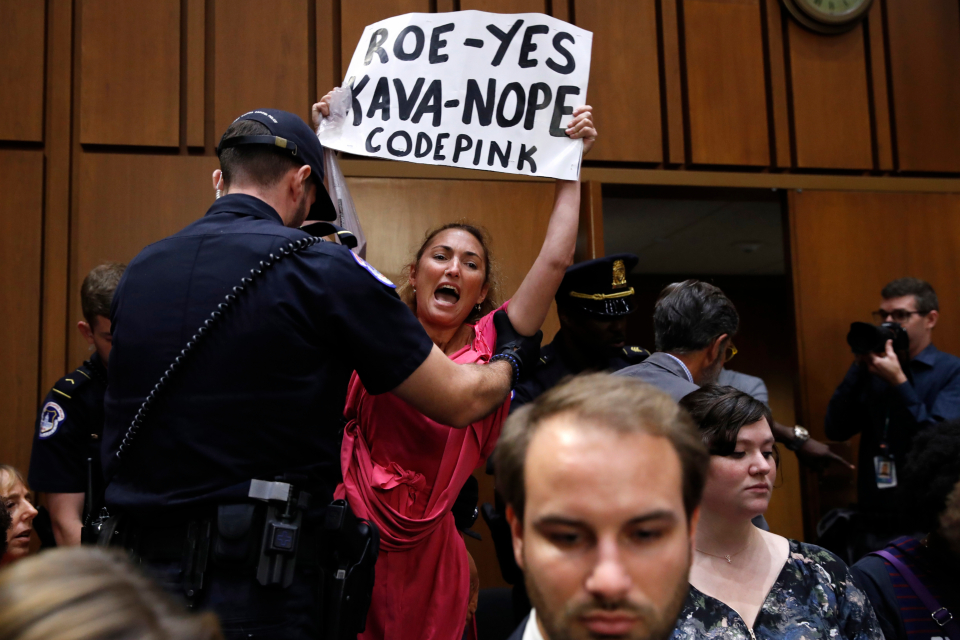 Quarreling and confusion disrupted the start of the Senate's confirmation hearings for Supreme Court nominee Brett Kavanaugh on Tuesday, Democrats trying to block the proceedings over documents withheld by the White House, while protesters interrupted the session in a persistent display of opposition.

In his opening remarks released ahead of delivery, Kavanaugh sought to tamp down the controversy over his nomination, which would likely shift the closely divided court to the right. He promised to be a "team player" if confirmed, declaring that he would be a "pro-law judge" who would not decide cases based on his personal views.

But Democrats raised objections from the moment Chairman Chuck Grassley gaveled the committee to order. They want to review 100,000 documents about Kavanaugh's record being withheld by the White House as well as some 42,000 documents released to the committee on a confidential basis on the eve of the hearing, along with others not sought by Republicans on the committee. For more than an hour senators sparred while protesters repeatedly shouted at them.

"We have not been given an opportunity to have a meaningful hearing on this nominee," said Sen. Kamala Harris, D-Calif. Sen. Richard Blumenthal, D-Conn., made several motions to adjourn, saying if the confirmation continued, "this process will be tainted and stained forever."

Grassley denied multiple requests to postpone, defending the document production as the most open in history. He said the chaotic scene was something he'd "never gone through" in 15 past confirmation hearings.

More than two dozen protesters, shouting one by one, disrupted the hearing at several points and were removed by police.

"This is a mockery and a travesty of justice," shouted one woman. "Cancel Brett Kavanaugh!"

Others shouted against the president or to protect abortion access. "Senators, we need to stop this," called out one.

Struggling to speak over protesters, Sen. Orrin Hatch, R-Utah, said: "These people are so out of line they shouldn't be in the doggone room." As patience thinned and tempers flared, Sen. John Cornyn, R-Texas, denounced what he called the "mob rule."

As for the documents, Sen. Cory Booker, D-N.J., quipped that senators would have had to read 7,000 pages an hour overnight just to review those dropped Monday evening.

The panel's top Democrat, Sen. Dianne Feinstein, sought to provide context for the frustration coming from her side of the aisle.

"These are very unique circumstances. Not only is the country deeply divided politically, we also find ourselves with a president who faces his own serious problems," she said referring to the investigations of top administration officials. "So it's this backdrop that this nominee comes into."

With majority Republicans appearing united, it's doubtful the hearings will affect the eventual confirmation of President Donald Trump's nominee.  But they will likely become a rallying cry for both parties just two months before the midterm elections. The White House sent out a summary of how many times Democratic senators tried to halt the session with motions and questions, while Republican campaign officials denounced Democrats as "grandstanding" and "pandering" to the "resistance base" of voters.

Kavanaugh sat silently, occasionally sipping water and taking notes on senators' points. He was invited to introduce his parents, wife and children, who sat through much of the outbursts before being escorted out of the room. Also present were outgoing White House Counsel Don McGahn and Deputy Attorney General Rod Rosenstein.

In prepared opening remarks, Kavanaugh declared he would be even-handed in his approach to the law.

"A good judge must be an umpire, a neutral and impartial arbiter who favors no litigant or policy," Kavanaugh said.

"I would always strive to be a team player on the Team of Nine," he said.

The Supreme Court is often thought of as nine separate judges, rather than a team. And on the most contentious cases, the court tends to split into conservative and liberal sides. But justices often say they seek consensus, and they like to focus on how frequently they reach unanimous decisions.

Kavanaugh, 53, has served for the past 12 years on the federal appeals court in Washington, D.C., which is considered the second most important court after the Supreme Court. His conservative record includes a dissenting opinion last year that would have denied immediate access to an abortion for an immigrant teenager in federal custody.

As a young lawyer, Kavanaugh worked for Justice Anthony Kennedy, whom he would replace. Kennedy retired at the end of July. Trump's first nominee, Neil Gorsuch, was a Kennedy law clerk the same year as Kavanaugh.

Questioning of Kavanaugh will begin Wednesday, and votes in committee and on the Senate floor could occur this month. Kavanaugh could be on the bench when the court begins its new term on Oct. 1.

Grassley has called Kavanaugh "one of the most qualified nominees ever picked for the court." The American Bar Association has given Kavanaugh its highest rating, well qualified.

The 42,000 documents released to the committee Monday pertained to Kavanaugh's work with previous administrations. Senate Democratic Leader Chuck Schumer complained it was impossible to go through them in time. Democrats have also complained that they have not received all relevant documents.

I’ve seen enough. I will vote no. As long as the republicans refuse to release 96 percent of the Kavanaugh records, this process is illegitimate. Every other SCOTUS nominee has turned over nearly everything, and I am now convinced they are hiding something.

Rebuffed in their request to delay the hearing, Democrats are planning to shine a light on Kavanaugh's views on abortion, executive power and whether Trump could be forced to testify as part of special counsel Robert Mueller's Russia investigation.

Many Democratic senators already have announced their intention to vote against Kavanaugh and many Republicans have likewise signaled their support. A handful of Democrats seeking re-election in states Trump carried in 2016 could vote for Kavanaugh.

If no Democrat ultimately supports the nomination, the Republicans have no margin for error in a Senate they control by 50-49. Sens. Susan Collins of Maine and Lisa Murkowski of Alaska are the only two Republicans even remotely open to voting against Kavanaugh, though neither has said she would do so. Abortion rights supporters are trying to appeal to those senators by focusing on concerns that Kavanaugh could vote to limit abortion rights or even overturn the landmark Roe v. Wade ruling from 1973 that first established a woman's constitutional right to an abortion.

Democrats have been under intense pressure from liberal voters to resist Trump, and many remain irate, even two years later, over the treatment of Merrick Garland, President Barack Obama's nominee for the Supreme Court, who was denied so much as a hearing last year by Majority Leader Mitch McConnell.

Kavanaugh, in his statement Tuesday, gave a shout-out to Garland, "our superb chief judge." Garland is the chief judge of the appeals court on which Kavanaugh has served.

Democrats are powerless to delay a vote on Kavanaugh since McConnell led Republicans, during the Gorsuch nomination, in eliminating the 60-vote filibuster threshold that had been in place for Supreme Court nominations.