Calls for Respect for Black America at Aretha Franklin's Funeral 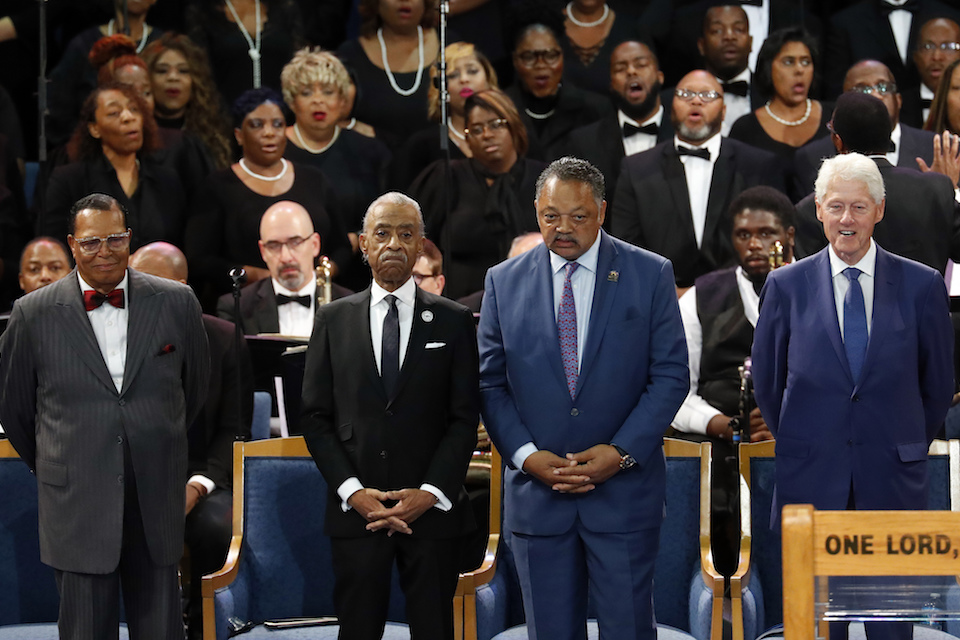 DETROIT (AP) — As Aretha Franklin was remembered at her funeral Friday as a proud black woman who also used her magnificent voice to stand up for the black community she loved, several speakers used the moment to continue to demand respect for black America.

Amid the gospel, personal reflections and grief were calls to register and turnout to vote in November and condemnation of President Donald Trump, who, upon her death, referred to Franklin as "someone who worked for me" — a comment that rankled many African-Americans.

"No — she used to perform for you," the Rev. Al Sharpton said to cheers and applause from the crowd.

"She worked for us. Aretha never took orders from nobody but God." 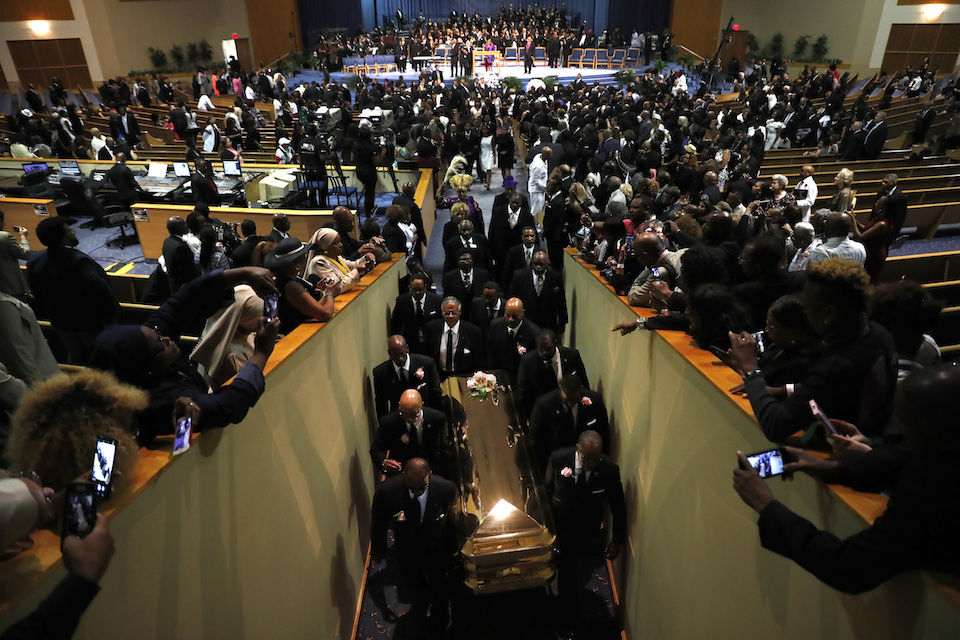 Pallbearers carry the casket out of Greater Grace Temple at the end of the funeral for Aretha Franklin, Friday, Aug. 31, 2018, in Detroit. Franklin died Aug. 16, 2018 of pancreatic cancer at the age of 76. (AP Photo/Jeff Roberson)

Franklin's civil rights legacy was mentioned often during the eight-hour service, and was tied to her faith and roots in the black church.

Many also mentioned her father, the Rev. C.L. Franklin, and his civil rights leadership, which influenced his daughter from a young age.

Late Friday, Franklin was laid to rest in a mausoleum at Woodlawn Cemetery, the final resting place of her father.

None of the politicians present — including former President Bill Clinton and former Attorney General Eric Holder — took the opportunity to turn the event partisan.

But others seized on Trump's comments and Franklin's message of dignity to speak to the present social and political climate.

In pointing out the long lines to pay tribute to Franklin this week, the Rev. Jesse Jackson lamented that the lines to vote often aren't nearly as long.

"Aretha was on the battleground for 60 years," Jackson told the audience.

"We have long lines to celebrate death, and short lines for voting. Something is missing.

"If you leave here today and don't register to vote, you're dishonoring Aretha."

Judge Greg Mathis, one of Franklin's many friends who often talked politics with her, said that his last conversation with Franklin earlier this summer was about the ongoing water crisis in Flint, Michigan, where government negligence has left residents living with lead-tainted water since 2014.

"Her last words to me ... were "'Go back up there and sock it to 'em!,'" Mathis told the crowd before vowing that he would in her memory.

Some made a statement without saying a word.

When she was shouted out from the stage, California Democrat Rep. Maxine Waters — who has called frequently for Trump's impeachment and is a campaign rally punching bag for the president — acknowledged the crowd with the "Wakanda salute," from the movie "Black Panther," closing her fists and crossing her arms over her chest to applause.

Many in the audience, including President Clinton, stood and cheered.

"Everybody just point over there and tell her, 'We got your back!'" said Bishop Charles H. Ellis III, pastor of Greater Grace Temple, which the audience shouted in Waters' direction. 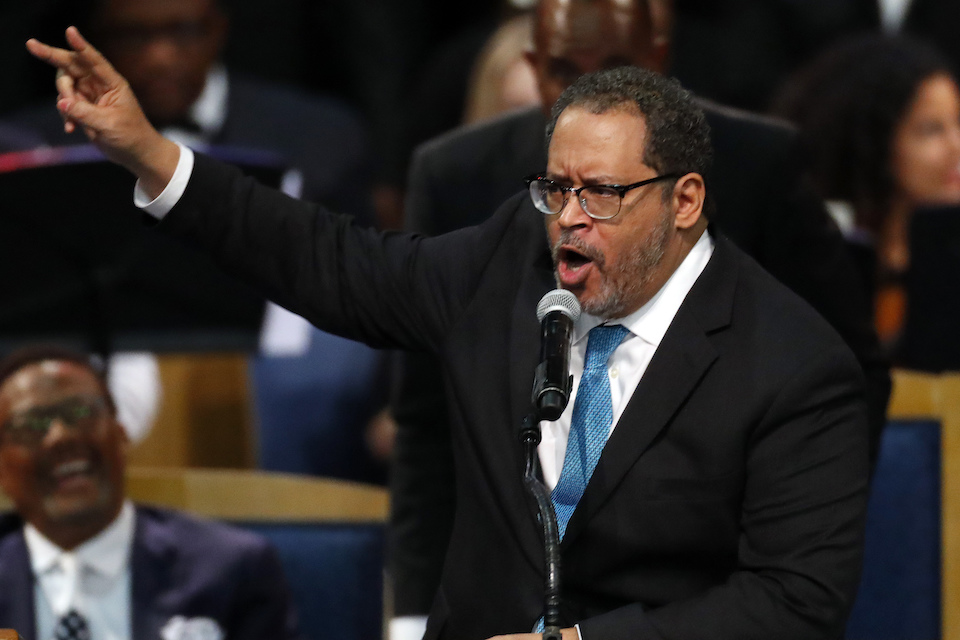 "She ain't work for you," Dyson shouted over applause. "She worked above you. She worked beyond you. Get your preposition right." 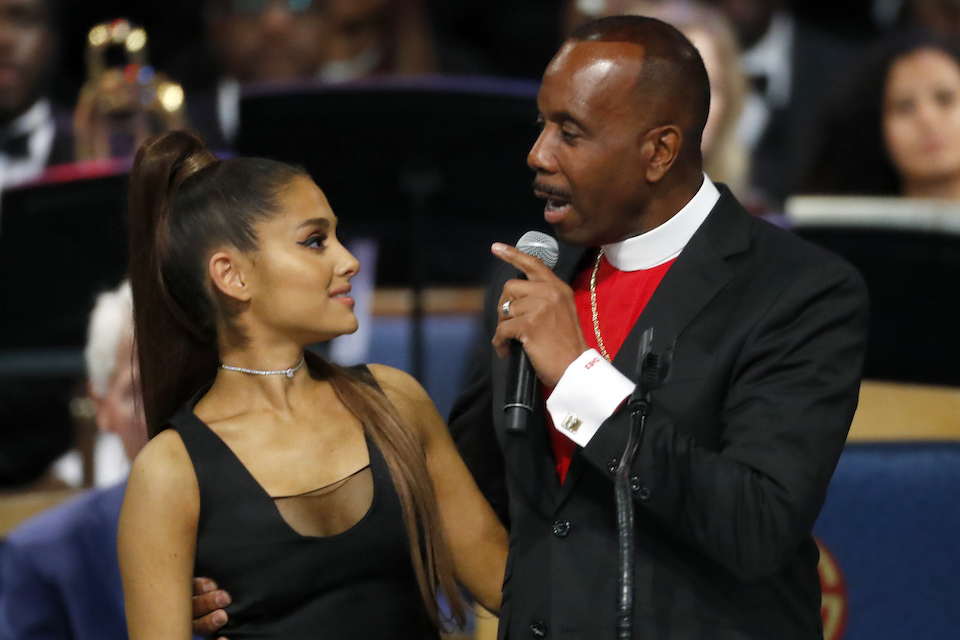 The bishop who officiated Aretha Franklin's funeral apologized Friday to Ariana Grande for how he touched her onstage and a joke he made about her name.

Bishop Charles H. Ellis III led Franklin's funeral and awkwardly greeted Grande on stage after she performed "(You Make Me Feel Like) A Natural Woman." Images of the moment showed Ellis' hand holding Grande well above her waist, with his fingers pressing against one side of her chest.

The preacher apologized in an interview with The Associated Press at the cemetery where Franklin was interred late Friday.

"It would never be my intention to touch any woman's breast. ... I don't know I guess I put my arm around her," Ellis said. "Maybe I crossed the border, maybe I was too friendly or familiar but again, I apologize."

He said he hugged all the performers during Friday's eight-hour service.

He added: "The last thing I want to do is to be a distraction to this day. This is all about Aretha Franklin."

Many people posted close-up images of the moment on Twitter, tagging it #RespectAriana.

Ellis also apologized to Grande, her fans and Hispanic community for making a joke about seeing her name on the program and thinking it was a new item on the Taco Bell menu.

"I personally and sincerely apologize to Ariana and to her fans and to the whole Hispanic community," Ellis said. "When you're doing a program for nine hours you try to keep it lively, you try to insert some jokes here and there."

Ellis' touching of Grande overshadowed some criticism earlier in the ceremony the short dress Grande wore for her performance. Numerous people posted criticisms online that the dress was too short for church.