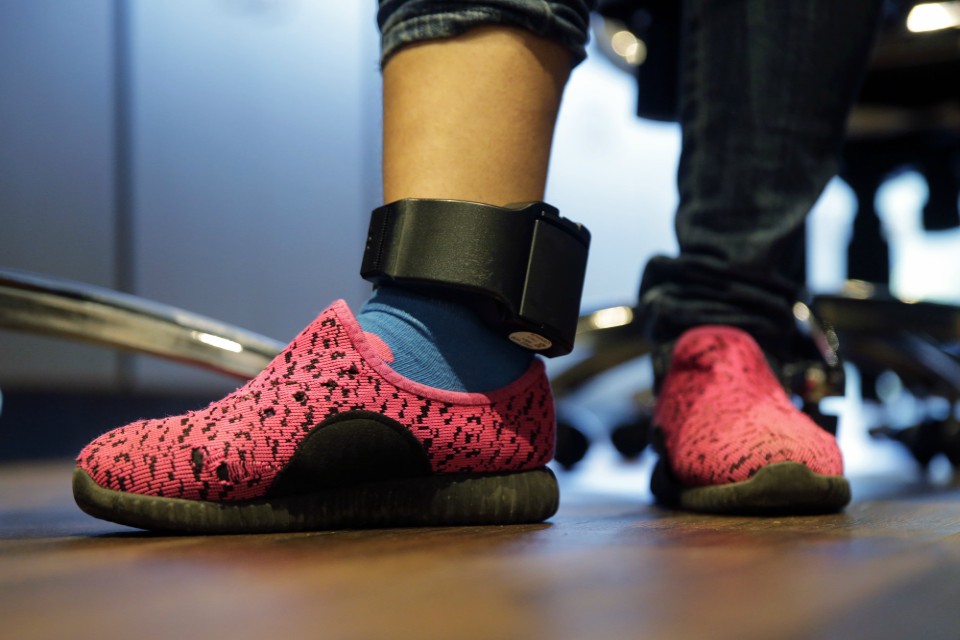 Federal authorities' shift away from separating immigrant families caught in the U.S. illegally now means that many parents and children are quickly released, only to be fitted with electronic monitoring devices — a practice which both the government and advocacy groups oppose for different reasons.

Government officials say the devices are effective in getting people to show up to immigration court, but that they stop working once deportation proceedings begin. The reason, according to attorneys and people who wore the devices or helped monitor those wearing them: Some immigrants simply ditch them and disappear.

Immigrant advocates and legal experts argue, meanwhile, that the devices — which are commonly used for criminal parolees — are inappropriate and inhumane for people seeking U.S. asylum. The American Bar Association has called doing so "a form of restriction on liberty similar to detention, rather than a meaningful alternative to detention."

Congress first established the program in 2002, though GPS monitors grew more common as deportations rose to record levels under President Barack Obama's administration, averaging more than 385,000 annually from 2008-2012. Their use increased even more after 2014, when thousands of unaccompanied minors and families began traveling to the U.S.-Mexico border and asking for asylum, fleeing gang and drug smugglers or domestic violence in Central America.

Earlier this year, immigrant families were separated as part of a "zero tolerance" program. But President Donald Trump reversed that policy with an executive order in June, meaning reunited families are being treated like other asylum seekers. They're usually detained for a few days, then issued ankle monitors and released to live with friends or relatives already in the U.S. as they progress through a process that can take years.

As of early July, there were nearly 84,500 active participants in ICE's Intensive Supervision Appearance Program, or alternatives to detention — more than triple the number in November 2014. Around 45 percent of those were issued GPS monitors, 53 percent report by phone using biometric voice verification and 2 percent use facial recognition apps.

ICE spokesman Matthew Bourke said immigration court attendance is strong for immigrants in intensive supervision, but that ankle monitors and other measures are "not an effective tool" after deportation orders are issued. There isn't reliable information on the number of ankle monitor recipients who remove them and flee — especially when deportation is imminent — but experts say it's high.

"People can just cut those things off if they want to," said Sara Ramey, a San Antonio immigration attorney whose asylum-seeking clients are routinely assigned ankle monitors. "It doesn't really ensure compliance."

The most recent available data was in 2012, when a contractor's annual report (later referenced in a 2015 Department of Homeland Security Inspector General report) showed that 17,524 people, or around 65 percent of nearly 40,500 total participants, left the intensive supervision program that year. Of those, around a fifth were deported or granted asylum, while about 5 percent "absconded." The rest were arrested, violated other program rules or were no longer required to participate for unspecified reasons — which made determining the program's true success rate impossible.

Many in the Trump administration see alternative to detention programs as undermining their larger goal of keeping immigrants in custody, which helps resolve court cases faster and leads to more deportations.

Officials wanted to keep families in detention until their cases were completed, but a federal agreement on the handling of children in government custody generally prevents youngsters from being detained longer than 20 days. In the meantime, ankle monitors and other alternatives to detention programs resulted in 2,430 people being deported from the U.S. in fiscal year 2017, Bourke said. That's an average cost of $75,360 per deportation.

ICE's average length of stay in immigration detention is about 40 days, while the average length of time for immigrants not in custody to have immigrant cases on court dockets is more than eight years. Though daily costs are lower when releasing immigrants with electronic monitoring rather than keeping them in custody, the average cost of detention is about $5,500, compared to $16,000 for someone who is released but remains under surveillance for years, the Trump administration says.

That's a key reason why ankle monitors have been a boon to Boca Raton, Florida-based GEO Group, which in 2010 acquired Behavioral Interventions Inc. of Boulder, Colorado, for $410 million. A year earlier, Behavioral Interventions had secured ICE's first nationwide supervision contract for immigrants in the country illegally. GEO signed an intensive supervision contract in 2014 that has been re-negotiated several times and is set to expire in November.

GEO says, under its contract, it must refer all questions to ICE.

Stock in the company, which employs David Venturella, a former ICE assistant director, and has ex-ICE chief Julie Myers Wood on its board, has outrun the larger bull market since Trump took office in January 2017.

Ankle monitors used to be most frequently issued to women with young children, but now are being increasingly affixed to all kinds of immigrants.

Sandra — who asked that her full name not be published so as not to jeopardize her asylum case — said she left La Union el Pozo Sayaxche in northern Guatemala with her 12-year-old son, Juan Carlos, on May 12. She said she fled because she faced discrimination because of her dark skin, but that she also was attacked sexually by a man who threatened to kill her if she went to the police.

The pair walked through the night and turned themselves into U.S. authorities about three weeks later. They were held in different Texas detention centers for nearly two months, then reunited and released — but not before she got an ankle monitor. They now live in New Jersey, where she's required to meet regularly with an immigration official.

"I'm not in one of those detention centers, thank God, but I still feel like I'm a prisoner."

The devices have rechargeable batteries that often last six hours or less and must be powered at all times. Taylor Levy, legal coordinator at Annunciation House in El Paso, which has taken in hundreds of reunited families, said most of the immigrant adults get ankle monitors — and many complain that they give them rashes, apply painful pressure and make getting dressed difficult.

If a device's battery dies or bangs against something, alarms are triggered and orders are barked in Spanish, usually commanding wearers to call their case workers. The same holds when a monitor registers a geolocation outside the area to which a wearer is restricted. Immigrants issued ankle monitors also usually must stay home on assigned days for unannounced visits, or are required to check in personally with case workers.

A visit to a low-slung office building near Houston's George Bush Intercontinental Airport found nearly 70 people — almost all women — sitting in folding chairs waiting to see case workers, their ankle monitors tucked beneath pants legs. Maria, 40, showed off her monitor and bruised ankle. She said she'd fled the Honduran city of San Pedro de Sula after gang members threatened to kidnap her daughter but asked that her surname be withheld, citing concerns for her safety.

Many men with monitors "cut them loose and take off," Maria said. "Better if I stay here and follow instructions to the end."

Two former case workers with a GEO subsidiary, who spoke on condition that they not be named because they wanted to safeguard their chances for future government employment, said it was common for ankle monitors to be removed prematurely, and people who do so are rarely pursued. That's consistent with the 2015 DHS inspector general's report, which found that ICE lacked the resources to chase many who abscond.

"ICE has other priorities and most likely will not look for them," said one of the former case workers, who worked in Louisiana, Florida and Mississippi. He said that if someone did flee, the priority was recovering their ankle monitor — not tracking down the person who abandoned it.

"We would visit their house and knock on their door," the former case worker said, "and at most try to look for the GPS unit."