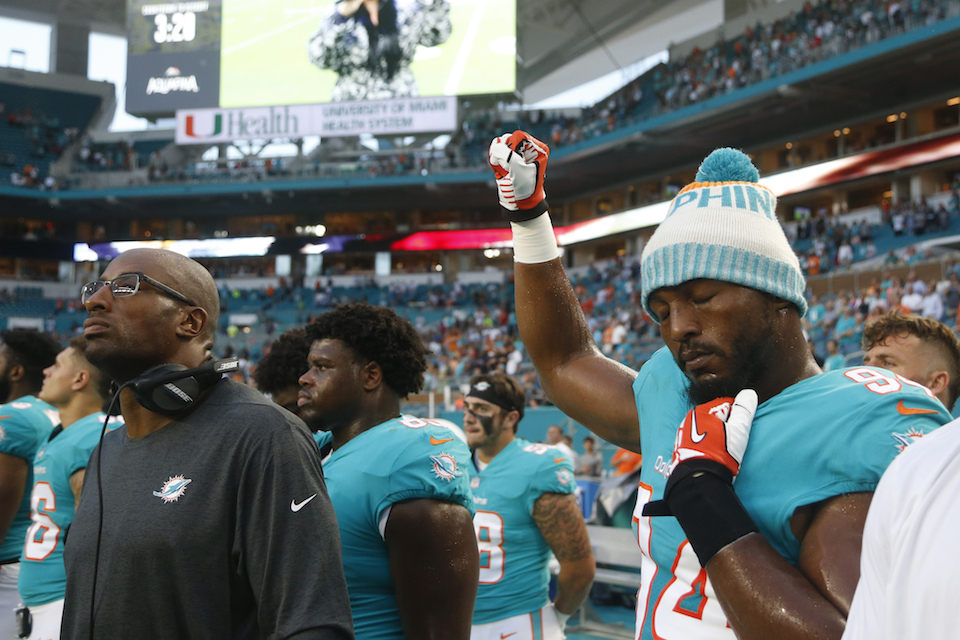 PHILADELPHIA (AP) — While the NFL continues discussions with the players' union regarding a national anthem policy, players who demonstrate are emphasizing they are protesting social injustice, racial inequality and systematic oppression.

They are not against the country, military, flag or "The Star-Spangled Banner" itself.

President Donald Trump wants players to "find another way to protest" and contended "most of them are unable to define" what they're demonstrating against.

Players, however, have made clear their position numerous times.

"I think part of the problem is that when you continue the rhetoric that this is controversial or this is somehow a negative thing, people treat it as such," Philadelphia Eagles safety Malcolm Jenkins said after resuming his demonstration before Thursday night's game.

"But we've seen in other leagues when they've decided to amplify the voices of their players to also emphasize the importance of the issues that we're raising, and change the narrative away from the anthem, that not only is it more acceptable, the fan base gets educated on what we're talking about, and we can actually make some movement."

Jenkins stopped his demonstration last season after the NFL committed $90 million over the next seven years to social justice causes in a three-segment plan that involves league players.

Jenkins and a few teammates wore a T-shirt before the game that read on the front: "More than 60 percent of prison populations are people of color."

On the back, it said: "Nearly 5,000 kids are in adult prisons and jails. #SchoolsNotPrisons." 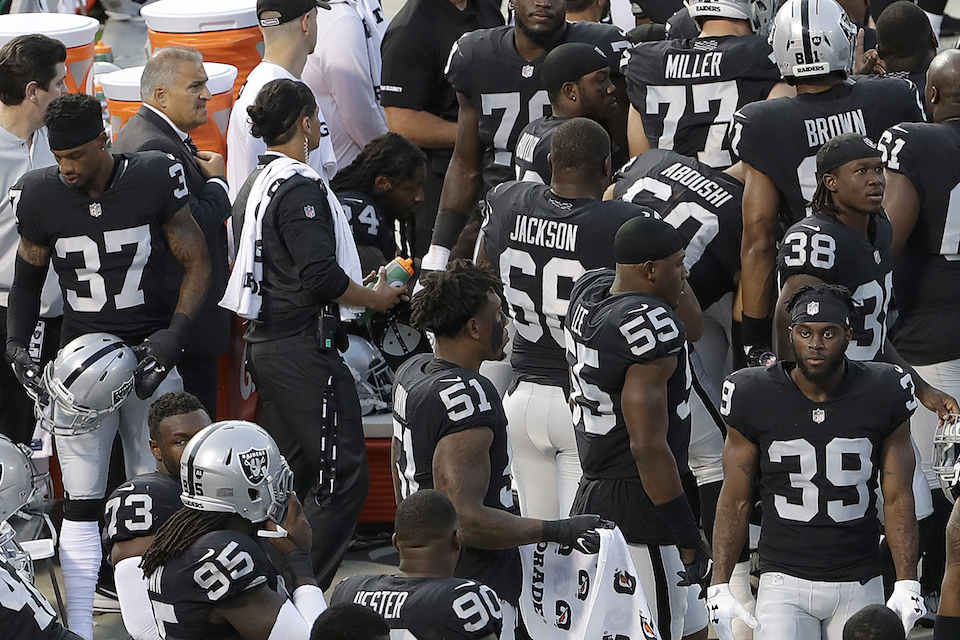 PHOTO: Oakland Raiders running back Marshawn Lynch, center left, sits near the sideline just before the national anthem at an NFL preseason football game between the Raiders and the Detroit Lions in Oakland, Calif., Friday, Aug. 10, 2018. Lynch remained seated for the anthem. (AP Photo/Jeff Chiu)

The league and the NFLPA have yet to announce a policy for this season regarding demonstrations during the anthem after the league initially ordered everyone to stand on the sideline when the anthem is played, or remain in the locker room.

"I understand that it's a business and you want to protect your bottom line and all of that, but at the end of the day, I think the smartest thing right now is to not have a rule and provide a better option," Jenkins said.

Teammate Chris Long showed his support for Jenkins, as he did last season, by putting his arm around him.

"Malcolm is taking action and he can always sleep good at night knowing that he's not being a fraud," Long said. "He's (demonstrating) and he's working in the community, like a lot of these guys are doing."

On Friday night, Oakland Raiders running back Marshawn Lynch sat during the national anthem before the exhibition opener against the Detroit Lions.

Lynch also sat for the anthem all of last season, but never gave a reason for his decision.

"I think you'll get a better idea of why we're doing what we're doing and maybe you can come to the other side and start supporting us."
Stills said "it would take a lot" for him to stop protesting.

"A good first step for us as a league would be acknowledging what they're doing to Colin Kaepernick and Eric Reid," Stills said.

"You can't say as a league you support the players and their protests and then blackball the players who initially started the protests.

To come to the drawing board and talk about solutions, we need to start there as a league, and then we can start drawing up other solutions to some of these other problems."

Kaepernick, the former San Francisco 49ers quarterback, began the movement in 2016 and was joined by teammate Eric Reid.

Both are unemployed — Kaepernick didn't play last season, either — and have pending collusion grievances against the NFL.

Wilson said he feels more free to express himself with the Dolphins than he did with the Kansas City Chiefs, but didn't elaborate.

"You get a lot of backlash for doing this," Wilson said.

"Nobody wants to bring the negative attention to themselves, but when you have a platform like this and you're able to speak on certain situations, you want to do that. We're not harming anybody."

Writing on Twitter from his New Jersey golf resort, Trump said Friday players "make a fortune doing what they love," and those who refuse to stand "proudly" for the anthem should be suspended without pay.

Quinn had a powerful message for critics.

"It's not a protest. It's an awareness," he said. "I think 'protest' segregates this country. The awareness we're trying to raise — this country preaches freedom and unity. That's all I'm trying to do.

"If you believe in something, no matter the consequences you stand by it. I want heaven here on Earth. I believe we preach too much negativity throughout this whole world. I think the message that needs to be spread is peace, love and happiness.

"Hearing the slander that we're protesting the flag, that's not it. It's not a protest. It's no disrespect to any servicemen or women out there. They salute with their hand over their heart, I hold my fist up. How can you look at that any different? That salute is just as meaningful to them as my fist in the air."