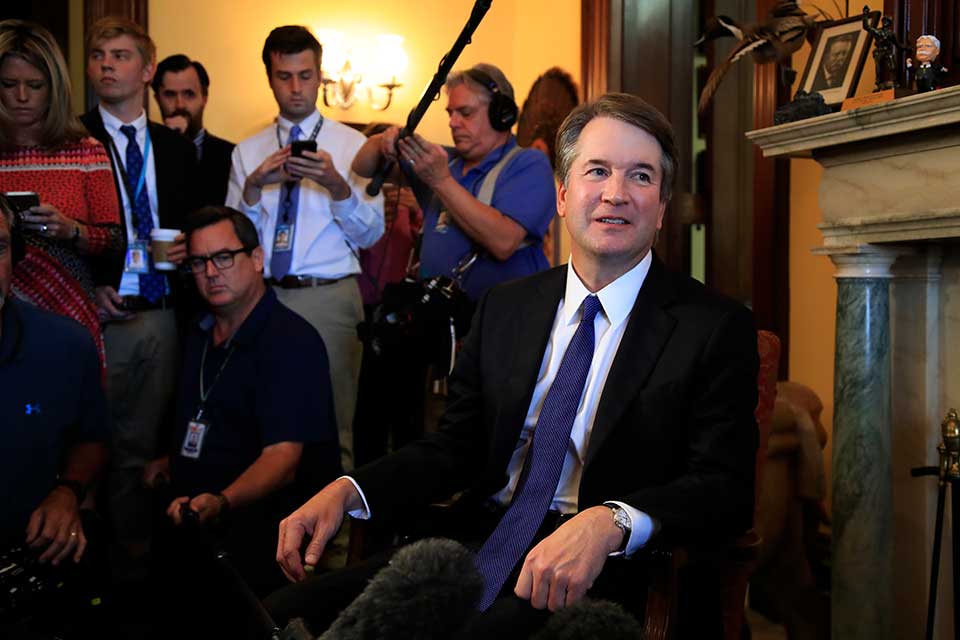 WASHINGTON (AP) — The White House is turning up the pressure on Senate Democrats to meet with President Donald Trump's Supreme Court nominee, though with little success.

Judge Brett Kavanaugh has met with 23 senators, all of them Republicans, since his nomination two weeks ago. Democratic lawmakers have been pushing for more information before holding any one-on-one meetings with the 53-year-old nominee.

Democratic Sen. Richard Blumenthal of Connecticut, a member of the Senate Judiciary Committee, said that before he'll meet with Kavanaugh, Republican leadership needs to agree to make available documents from his work in President George W. Bush's administration, his writings and draft writings, and "everything that is conceivably relevant to his professional work prior to the bench."

"It's a threshold, absolute condition," Blumenthal told reporters in a conference call.

"For members of the opposing party to demand answers to questions and yet refuse to even meet with the qualified Supreme Court nominee is unprecedented," Sanders said. "Sen. Schumer should stop these political games and meet with Judge Kavanaugh."

The meetings are a precursor to a confirmation hearing and a final Senate vote, which Republicans want to occur before Oct. 1. Democrats have called for no vote before the November midterm elections.

Democrats are demanding access to paperwork from Kavanaugh's tenure as staff secretary in Bush's White House, on the 2000 election presidential recount and on special counsel Kenneth Starr's probe of President Bill Clinton. The tally could stretch at least 1 million pages. The paper chase has become a game of high-stakes political strategy.

Blumenthal said he was only speaking for himself, but he wants to see "any documents with (Kavanaugh's) name on them, whether he is a direct recipient or a sender or he is copied, because all of them are relevant to questions that we may have."

A Possible Risk to Re-election Campaigns

Avoiding Kavanaugh could be politically risky for Democrats in conservative-leaning states. Sen. Joe Manchin, D-W.Va., is scheduled to meet with Kavanaugh next Monday, while the office of Sen. Heidi Heitkamp, D-N.D., is working with the White House to set up a meeting, but it has not been scheduled yet.

A Senate Democratic leadership aide said Schumer is fine with some Democrats meeting with Kavanaugh, but he won't unless there is progress in releasing documents. The aide spoke on condition of anonymity to discuss a private conversation.

Sen. John Cornyn of Texas, the No. 2 Republican in the chamber, said half of the Democratic lawmakers have already signaled they'll vote against Kavanaugh's confirmation. He said some of the demands for documents are a stalling tactic, but that won't keep the Senate from voting.

"Instead of chasing after irrelevant records from the Bush White House, I would urge our colleagues to read Judge Kavanaugh's opinions and meet with the judge and get to know him," Cornyn said.

Cornyn warned that if the nomination process continues after the Supreme Court begins its next term in October, then the Senate will remain in session until the midterm elections on Nov. 6.

That would mean Democratic senators would be in Washington for the weeks leading up to the election, historically a time when lawmakers have the flexibility to spend time on the campaign trail. That scenario could be problematic for senators seeking re-election in states that Trump won in 2016.

"We will vote on his nomination before the midterm election," Cornyn said.

Kavanaugh had no meetings lined up with lawmakers Monday but will resume making the rounds on Capitol Hill on Tuesday.