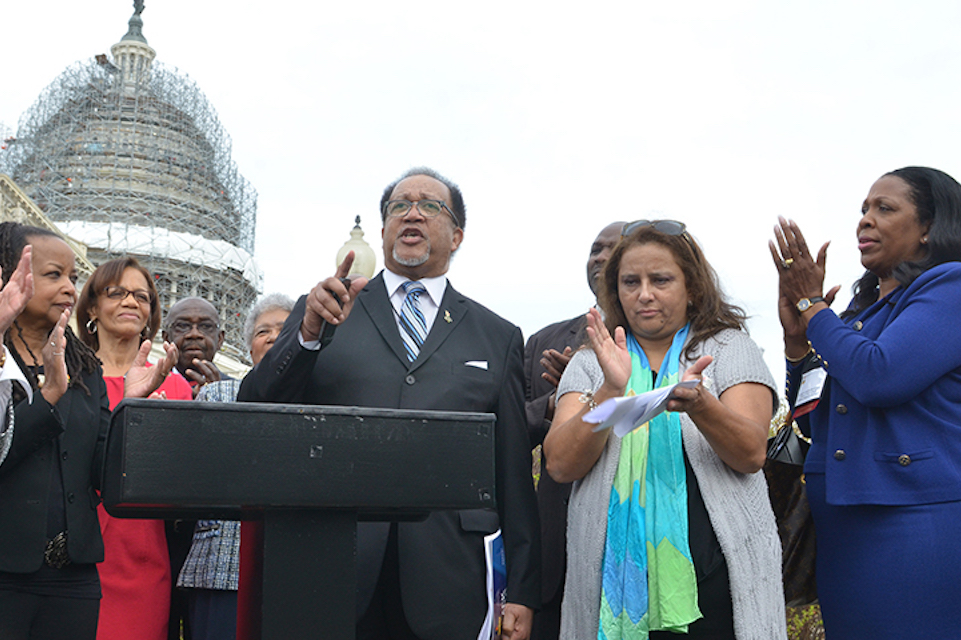 Over the past five fiscal years from 2013 to 2017, federal government agencies have spent approximately $5 billion in advertising, but a minute share—$327 million—went to minority-owned businesses, according to a long-awaited report from the Government Accountability Office.

The federal government serves as the largest advertiser in the country.

While non-minority-owned businesses continue to rake in billions of dollars in federal advertising money, Hispanic-owned businesses received just $192 million over five years—or about $38.4 million per year. 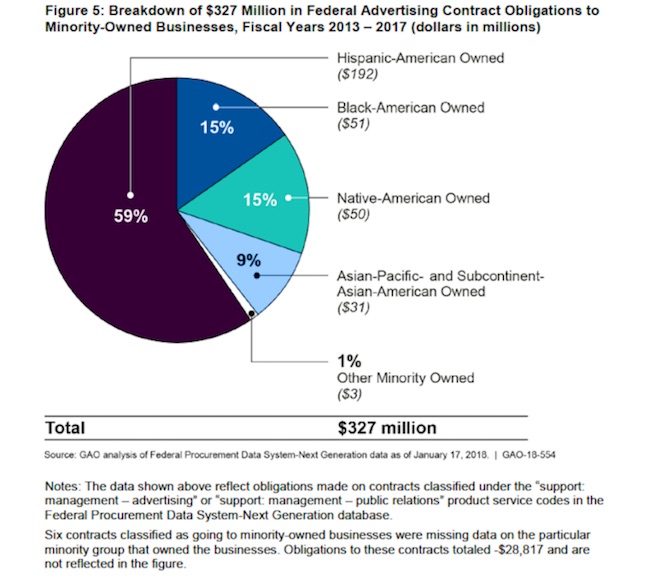 Black-owned businesses netted just $51 million—or roughly $10 million per year over the five years covered in the new report, which was prepared over a nine-month period beginning last October.

Congresswoman Eleanor Holmes Norton (D-D.C.) and other members of the Congressional Black Caucus requested the report.

Native American-owned businesses were the recipients of $50 million in advertising spending over the past five fiscal years while Asian American-owned enterprises received $31 million over the same period, according to the report.

Ethnicities classified as “other” received $3 million.

“This factual report exposes gross, racial discrimination and the refusal of the federal agencies cited in the report to be serious about diversity and inclusion with respect to annual federal spending on advertising,”

“For the government to admit, today, on the record, that in the last five fiscal years, nearly $5 billion was spent on advertising and yet only a total of $327 million was actually spent on minority-owned businesses…this report is not surprising nor is it shocking, but it does reveal the consequences of systemic racial discrimination in both Republican and Democratic administrations when it comes to federal advertising spending.”

NNPA Chairman Dorothy R. Leavell wasn’t surprised by the GAO report, but she still expressed disappointment in the federal government.

Leavell, who is also the publisher of the Crusader newspapers in Chicago and Gary, Ind., called the federal government’s current level of advertising with Black-owned firms “atrocious.”

“We have the Census coming up, HHS with Open Enrollment, and what they’ve spent with us on a scale of 1 to 10 is less than 1,” Leavell said.

“How do you get this government to be responsive to its citizens; to give them information; to work with our businesses, and to do all of the other things that federal agencies should be doing?”

Thirty-four other agencies were responsible for the remaining 27 percent of such obligations.

“Some agencies directed all or nearly all of their advertising contract obligations to specified businesses, but because these agencies’ advertising contract obligations were relatively low, the amounts they directed to these businesses were also relatively low,” Kris Nguyen, the acting director of Strategic Issues at GAO, wrote.

It’s been more than a decade since the GAO published a report on federal advertising spending. The 2007 report revealed that just five percent of the $4.3 billion available for advertising campaigns went to minority-owned businesses.

That report singled out five agencies—DOD, DHS, the Department of the Treasury, Department of the Interior, and the National Aeronautics and Space Administration—for their spending with minority-owned contractors.

For each of the past five years, DOD, HHS and DHS were consistently the top three agencies in terms of the amount of advertising contract obligations they directed to specified businesses.

All three generally increased the amounts they obligated to these businesses.

For example, in fiscal year 2013, the three agencies shuttled over 60 percent of all federal advertising contract obligations to specified businesses; in 2017 they accounted for more than 80 percent.

In 2017, DOD obligated 30 percent of the $147 million in advertising contracts to SDBs and those owned by minorities and women. That was followed by Homeland Security (27 percent), DHS (25 percent) and all other federal agencies (18 percent).

Those figures were up from 2013 when the same agencies contracted for just $75 million in advertising.

Leavell said that it’s good to finally have the report out. Now, the NNPA chairman wants to see direct action that will ensure that federal agencies spend more of their advertising budgets with Black-owned firms.

“We’re going to call on [HHS] to talk to them about Open Enrollment and other programs, so that we can figure out how to not only increase advertising in Black newspapers, but also to distribute vital information to our communities.”

Norton spokesman Benjamin Fritsch said the congresswoman was examining the report and would comment once she’s reviewed it.

However, Chavis said the NNPA would call on Congress to craft legislation that could force the hand of federal agencies to do more business with minority-owned firms.

“The NNPA, therefore calls upon Congressman Cedric Richmond, the chairman of the CBC, as well as members of the Congressional Hispanic Caucus to forcefully raise our voices of discontent and reaffirmation of our demands for equity, for justice, for fairness and put an end to this kind of systemic refusal to treat African American-owned and Latino-owned businesses along with others in a just, fair and equitable manner,” Chavis said.

“We intend to amplify our voices and amplify our actions as a result of the GAO pulling the sheets off the unequal, unjust and unfair federal advertising spending. We will not be silent.”

Dr. Chavis continued: “The NNPA expresses its gratitude to Eleanor Holmes Norton for taking the lead to help ensure that this GAO report will be released to the public and, for that, we are grateful.

The NNPA also thanks other members of the CBC and CHC for their leadership in this issue.

Today, however, it’s time for all of us to respond and to act. There should be legislation introduced in Congress immediately to rectify this gross, systemic inequity.”

Stacy Brown is an NNPA Newswire Contributor and co-author of “Michael Jackson: The Man Behind the Mask: An Insider’s Story of the King of Pop.” Follow Stacy on Twitter @stacybrownmedia.