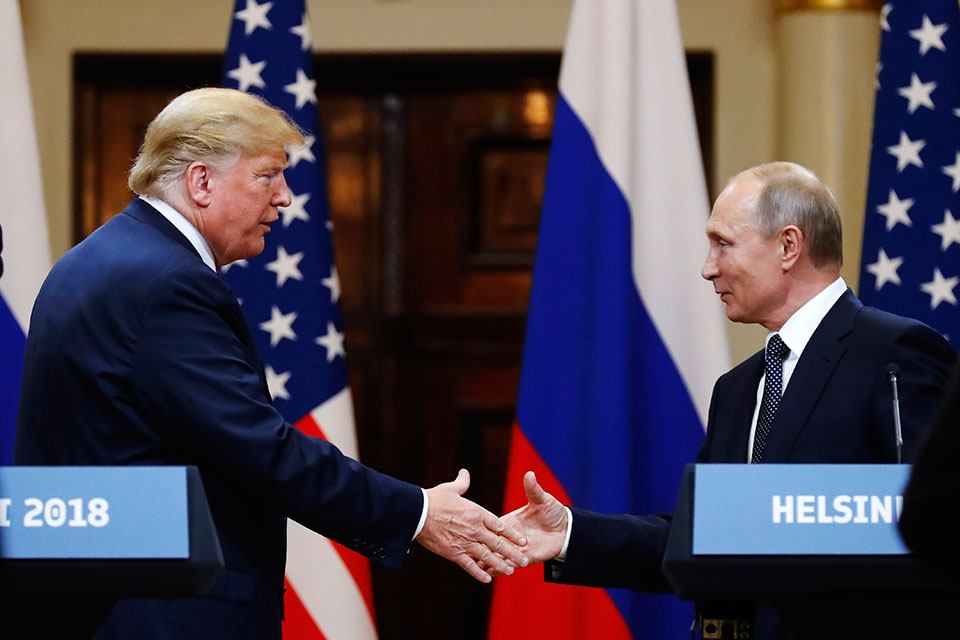 WASHINGTON (AP) — Unbowed by swirling criticism of his summit encounter with Vladimir Putin, President Donald Trump swiftly invited the Russian leader to the White House this fall for a second get-together. Putin's ambassador to the U.S. said Moscow is open to discussing such a meeting, even as confusion abounds over exactly what they discussed the first time.

Cleanup has continued from Monday's two-hour private meeting in Helsinki, Finland, with Trump belatedly saying Putin's "incredible offer" of shared U.S.-Russia investigations was no good after all.

Implications of an Invitation to The White House

A White House meeting would be a dramatic extension of legitimacy to the Russian leader, who has long been isolated by the West for activities in Ukraine, Syria and beyond and is believed to have interfered in the 2016 presidential election that sent Trump to the presidency. No Russian leader has visited the White House in nearly a decade.

Trump asked National Security Adviser John Bolton to invite Putin, and "those discussions are already underway," Press Secretary Sarah Huckabee Sanders said Thursday. Trump earlier had tweeted that he looked forward to "our second meeting" as he defended his performance at Monday's summit, in which the two leaders conferred on a range of issues including terrorism, Israeli security, nuclear proliferation and North Korea.

"There are many answers, some easy and some hard, to these problems ... but they can ALL be solved!" Trump tweeted.

In Moscow, Anatoly Antonov, Russian ambassador to the U.S., said it is important to "deal with the results" of their first summit before jumping too fast into a new one. But he said, "Russia was always open to such proposals. We are ready for discussions on this subject."

The Kremlin has the final say, but hasn't responded yet to Trump's invitation.

News of Trump's invitation to Putin appeared to catch even the president's top intelligence official by surprise.

"Say that again," National Intelligence Director Dan Coats responded, when informed of the invitation during an appearance at the Aspen Security Forum in Colorado.

"OK," he continued, pausing for a deep breath. "That's going to be special."

The announcement came as the White House sought to clean up days of confounding post-summit Trump statements on Russian interference in the 2016 election. Trump's public doubting of Russia's responsibility in a joint news conference with Putin on Monday provoked withering criticism from Republicans as well as Democrats and forced the president to make a rare public admission of error.

Then on Thursday, the White House said Trump "disagrees" with Putin's offer to allow U.S. questioning of 12 Russians who have been indicted for election interference in exchange for Russian interviews with the former U.S. ambassador to Russia and other Americans the Kremlin accuses of unspecified crimes. Trump initially had described the idea as an "incredible offer."

The White House backtrack came just before the Senate voted overwhelmingly against the proposal. It was Congress' first formal rebuke of Trump's actions from the summit and its aftermath.

Asked about the Putin invitation, Alaska Republican Sen. Dan Sullivan said "I wouldn't do it, that's for damn sure."

"If the Russians want a better relationship, trips to the White House aren't going to help," he added. "They should stop invading their neighbors."

Mixed messages from Trump have increased worries in Congress that the White House is not taking seriously the threat that senior officials say Russia now poses to the upcoming 2018 midterm elections.

Democrats in the House sought Thursday to extend a state grant program for election security but were blocked by Republicans. There is $380 million approved in the current budget for the program, which is intended to help states strengthen election systems from hacking and other cyberattacks.

Democratic lawmakers erupted into chants of "USA! USA!" during the debate.

As for Putin's offer on investigations, Sanders it was "made in sincerity" and the U.S. hopes he will have the indicted Russians "come to the United States to prove their innocence or guilt."

Just a day earlier, the White House had said the offer was under consideration, even though the State Department called Russia's allegations against the Americans, including former U.S. Ambassador to Russia Michael McFaul, "absurd."

"The administration is not going to send, force Americans to travel to Russia to be interrogated by Vladimir Putin and his team," Pompeo said in an interview with The Christian Broadcasting Network.

Senate Republicans joined Democrats in swiftly passing a resolution, 98-0, that put the Senate on record against the questioning of American officials by a foreign government.

Republican Senate leader Mitch McConnell hastily arranged the vote as lawmakers unleashed an avalanche of resolutions and other proposed actions expressing alarm over Trump's meeting with Putin and the White House's shifting response.

Coats said Thursday he wished the president hadn't undermined the conclusions of American intelligence agencies while standing next to Putin and felt it was his duty to correct the record. He restated the U.S. intelligence assessment about Russian meddling and Moscow's "ongoing, pervasive efforts to undermine our democracy."

While they had met privately on three occasions in 2017, Trump opened the door to a potential White House meeting with Putin earlier this year. The Kremlin had said in April that the president had invited the Russian leader to the White House when they spoke by telephone in March. At the time, White House officials worked to convince a skeptical president that the Nordic capital would serve as a more effective backdrop — and warned of a firestorm should a West Wing meeting go through.

Still, Trump has expressed a preference for the White House setting for major meetings, including floating an invitation to Washington for North Korea's Kim Jong Un after their meeting in Singapore last month.

Putin would be setting foot inside the building for the first time in more than a decade.

He last visited the White House in 2005, when he met President George W. Bush, who welcomed the Russian leader in the East Room as "my friend."

President Barack Obama welcomed then-Russian President Dmitry Medvedev to the White House in 2010, and took him on a burger run at a joint just outside the capital.

Putin, in his first public comments about the summit, told Russian diplomats that U.S.-Russian relations are "in some ways worse than during the Cold War," but that the meeting with Trump allowed a start on "the path to positive change."

Meanwhile, Homeland Security Secretary Kirstjen Nielsen said she still has not seen evidence that Moscow tried to help elect Trump. She said at the Aspen Forum that Russia is attempting to "cause chaos on both sides."

This story has been corrected to show vote now underway, not canceled.