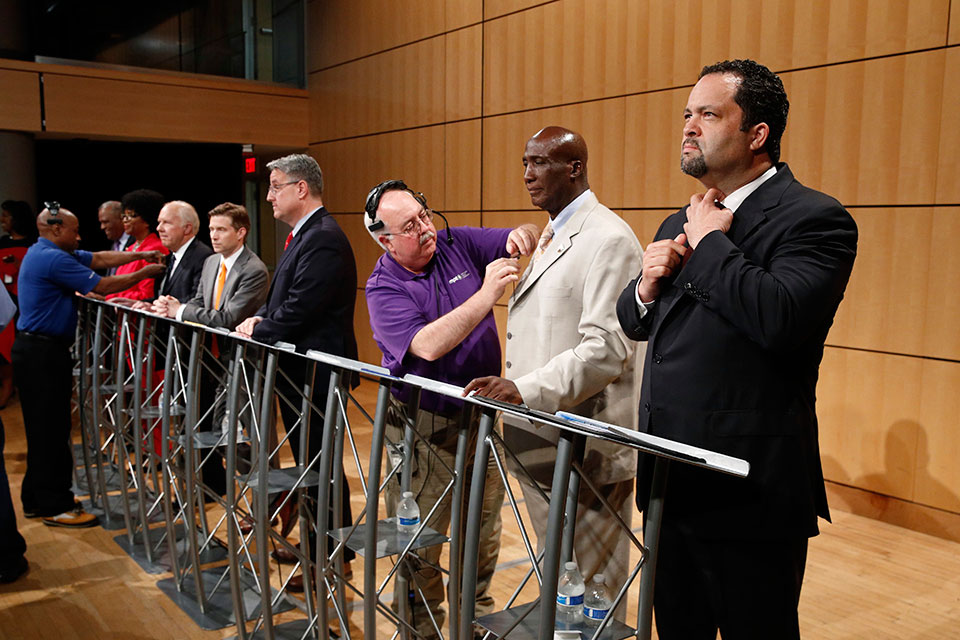 BALTIMORE (AP) — With two leading candidates who have a shot at becoming Maryland's first black governor, the crowded Democratic gubernatorial primary reflects the state's changing demographics and the party's efforts to harness the energy of an increasingly diverse electorate around the country.

Whoever wins the June 26 Democratic contest will face a tough battle in the fall against the state's popular incumbent, Republican Gov. Larry Hogan. But already, voters say they're encouraged by a field of minority, female and LGBT Democrats vying to lead a state where nearly a third of residents are black — the largest percentage outside the Deep South — and where racial tensions flared after the 2015 death of a black man in police custody.

The election also represents the latest test of whether Democratic efforts to appeal to minority voters in the age of President Donald Trump can be successful in state and federal elections nationwide.

On the first day of early voting on Thursday, Charla McKoy said she has never seen such a diverse group of candidates, and the field helped motivate her to vote.

"We need more voices from different backgrounds so everybody can be represented," said McKoy, a 43-year-old veterinarian in Frederick who voted for Ben Jealous, former national president of the NAACP. "I think we need to broaden our landscape."

Recent polls show Jealous and Prince George's County Executive Rushern Baker, who are both black, leading the field of more than a half-dozen Democratic hopefuls in the state that has never elected a black or female governor. A large percentage of voters are also undecided in the final weeks before the primary.

There have only been two elected black governors in U.S. history: Douglas Wilder in Virginia and Deval Patrick in Massachusetts.

On the GOP side, Hogan faces no primary challenge as he attempts to become the first Republican governor to win re-election since the 1950s in a state where Democrats outnumber Republicans 2-1. A recent Hogan campaign ad touted his steady leadership during the 2015 Baltimore riots and protests over the death of Freddie Gray. Recent polls have shown Hogan is popular, even among Democrats.

Democratic primary candidates will need to draw on the minority vote, said Mileah Kromer, the director of the Sarah T. Hughes Field Politics Center at Goucher College in Towson. Montgomery County is the state's most populous county and also majority-minority. To the northeast, Baltimore, the state's largest city, is heavily Democratic and about 64 percent black.

Jealous, who has the backing of labor unions and endorsements from progressive U.S. senators Bernie Sanders, Cory Booker and Kamala Harris, said in an interview that such a diverse primary field was overdue. Sanders is scheduled to stump for him Monday in Maryland.

A Diverse Slate of Candidates

"The people of Maryland deserve a slate of candidates as diverse as our electorate," said Jealous, who led the nation's oldest civil rights organization, which is based in Baltimore, for five years. "We're finally seeing that."

Baker, the top elected official in one of the nation's most affluent African-American-majority counties, said he's confident the diverse field will bring out voters.

"It shows that throughout the spectrum of this great diverse state of ours, we get to participate in this great democracy, and I think that's what's going to pull people to come out and vote and to make a choice," he said.

Another gubernatorial candidate, state Sen. Richard Madaleno, has added to the diversity of the field. LGBT activists say a television ad he released this month is the nation's first-ever political ad showing a same-sex couple kissing. It showed the gay lawmaker from Montgomery County kissing his husband after highlighting his support for Planned Parenthood and gun control.

The 30-second spot ended with Madaleno saying, "Take that, Trump!"

With women's issues also at the forefront this election cycle, gubernatorial candidate Krish Vignarajah was encouraged by the overwhelming victory of Georgia Democrat Stacey Abrams in that state's gubernatorial primary. Abrams said she is working to appeal to young people and nonwhites who have been less likely to vote, instead of courting older, white voters who have come to favor Republicans.

Vignarajah, a lawyer and former policy director for Michelle Obama, said she is campaigning to reach across demographics and galvanize Democratic voters.

"We are focused on the fact that in 2014 we had nearly 300,000 Democrats fail to show up, and the majority of them were women, minorities, immigrants and younger voters 18 to 29," said Vignarajah, a Sri Lankan immigrant. "And so, my focus has been speaking to the policies, ideas and vision that resonate regionally, demographically, but also align with where most Marylanders are. I think a lot of folks felt left behind."