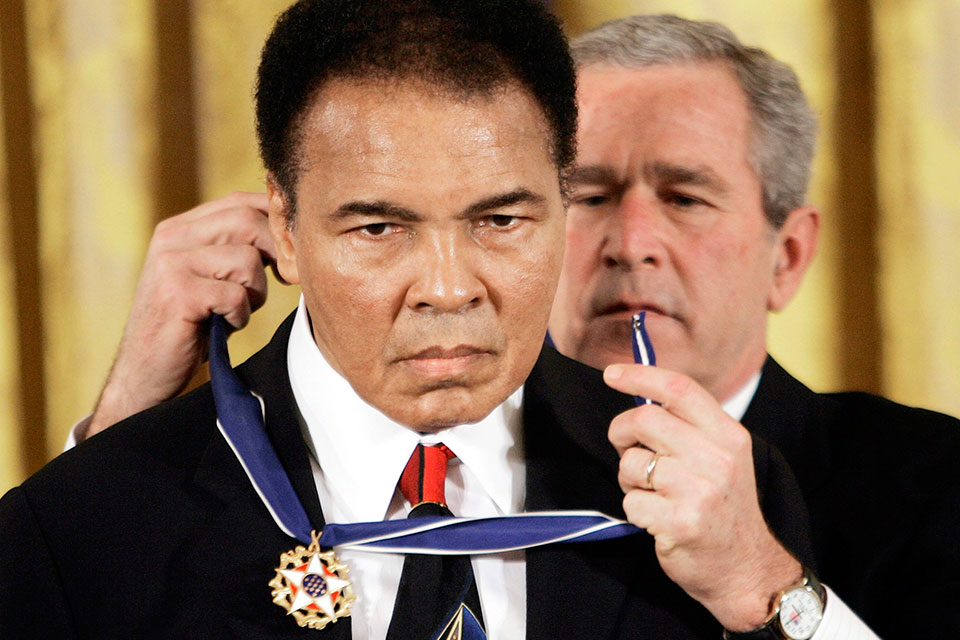 It's one of "thousands" of cases the president's team is reviewing, he told reporters as he left the White House en route to a world leaders' summit in Canada. And Trump said he's thinking about soliciting recommendations about other cases to consider from pro football players and other athletes who have protested racial injustice by kneeling during the national anthem — a tactic Trump has fiercely denounced.

Trump said that, "instead of talk," he's "going to ask all of those people to recommend to me — because that's what they're protesting — people that they think were unfairly treated by the justice system."

"I'm going to ask them to recommend to me people that were unfairly treated, friends of theirs or people that they know about and I'm going to take a look at those applications," he said.

The Power to Pardon is "a Beautiful Thing"

Trump has been on a clemency kick of late, using his near-limitless power to pardon a growing list that includes a former White House aide, a conservative commentator and a former sheriff convicted of violating a judge's orders who campaigned with Trump in 2016.

Earlier this week, he commuted the life sentence of a woman whose cause was championed by reality television star Kim Kardashian West. Last month he granted a posthumous pardon to boxing's first black heavyweight champion, Jack Johnson. Actor Sylvester Stallone alerted him to that case.

Trump told reporters Friday his team is now "looking at literally thousands" of people who have come to their attention because they've been treated unfairly or their sentences are too long.

"We have 3,000 names. We're looking at them," Trump said, calling the power to pardon "a beautiful thing."

Ali has no Criminal Record

Born Cassius Clay, Ali changed his name after converting to Islam in the 1960s. He refused to serve in the Vietnam War because of his religious beliefs, declaring himself a conscientious objector. He was stripped of his heavyweight crown in 1967, but his legal fight ended in 1971 when the Supreme Court ruled in his favor and overturned his conviction. He regained the boxing title in 1974.

"I'm thinking about somebody that you all know very well. And he went through a lot. And he wasn't very popular then," Trump said. "He certainly, his memory is very popular now."

Ron Tweel, Ali's lawyer, pointed out that Ali has no criminal record.

"We appreciate President Trump's sentiment, but a pardon is unnecessary," he said.

The White House did not immediately respond to questions about why the president feels one is needed.

Trump said last week also said he's considering commuting the sentence of former Illinois Gov. Rod Blagojevich, who is serving 14 years in prison for corruption, and pardoning celebrity lifestyle guru Martha Stewart, who served about five months on charges connected to an insider trading case. O.J. Simpson, he said in response to a reporter's question, is not on his list.

The president has been operating outside the usual Justice Department clemency protocol, in which submitted cases are carefully considered based on their merits, and recommendations made. Instead, White House officials say, Trump has focused on individual cases that have caught his attention or been brought to him by friends or celebrities. He's been especially drawn to cases in which he feels a person's prosecution has been politically motivated — a situation that may remind him of his own predicament at the center of the special counsel investigation into Russian election meddling.

Trump insisted Friday that he was also interested in clemency for regular people and those without high-profile backers.

He said that, "it's easier and people find it fascinating" to see him pardon the famous, but that he "would get more thrill out of pardoning people that nobody knows."

Yet Trump's suggestion that professional athletes help him identify cases only seemed to fuel concerns that those without star advocates will be ignored.

"President Trump has spent much of his first 18 months in office degrading NFL players who protest police brutality and racial injustice. Today, he has tried once again to change the narrative about the work of those and other activists, betraying a fundamental misunderstanding of the cause behind these protests — and using racist dog whistles to do it," said Jeff Robinson, the group's deputy legal director.

The players have been protesting racial injustice and the high numbers of African Americans killed by police.