Will Democrats Find a Presidential Hopeful at City Hall? 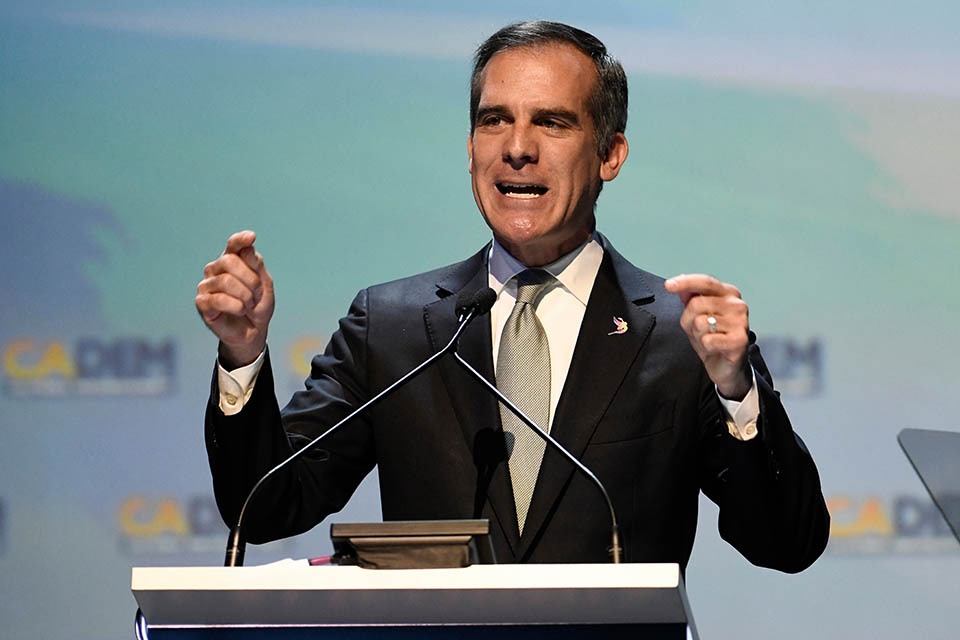 A handful of Democratic mayors from around the country are considering the race in 2020, taking early steps in Iowa, which holds the first major contest of the presidential campaign.

Los Angeles Mayor Eric Garcetti plans to visit Iowa Friday in hopes that his experience running a big city and facing touchy issues like immigration might distinguish him in a field with few traditional contenders.

No mayor has ever gone straight from city hall to the White House, though former mayors have served as president. But could a mayor make the leap? "I don't see why not," said New Orleans Mayor Mitch Landrieu, among the Democrats seeking to raise their profiles.

"The mayors of some American cities are running cities that are bigger than some countries. We run police departments and deal with public safety. We deal with a plethora of issues, and we're on the ground," Landrieu said. "We're very accountable."

He and other mayors say they aren't worried about the idea that Americans might want candidates who have more experience at the national level. After all, Republican President Donald Trump was elected without ever holding office. And mayors often claim a closer connection to their constituents than that of U.S. senators and representatives.

Being governor has been a more reliable stepping stone, but of the 50 states, only 16 have Democratic governors today, and few seem to be weighing 2020 campaigns. Democrats hold only half of the governorships they did 25 years ago.

And while Sens. Bernie Sanders, a Vermont independent who challenged Hillary Clinton for the 2016 presidential nomination, and Elizabeth Warren, D-Mass., get attention in Washington, some mayors are getting attention by taking actions on issues on which congressional Democrats, in the minority party in Congress, have been stymied.

Landrieu leaves office in New Orleans next month, and he's already ramping up a national book tour promoting his efforts to remove some Confederate monuments in his iconic city.

Garcetti's mission in Iowa is to make it clear to activists that his big-city experience is attractive on the national stage.

His city has roughly 4 million people, about a million more than the entire state of Iowa. He heads a police department of 30,000 and oversees the nation's busiest seaport.

De Blasio, whose city is more than twice the population of Los Angeles, was the guest at a Democratic-leaning activist group's annual dinner in December.

Garcetti and others have stepped forward on national issues such as immigration, a burning concern for Democrats in Iowa angry with the Republican-controlled Legislature and GOP governor for enacting legislation last week outlawing "sanctuary cities." That's a term for jurisdictions that limit local involvement in federal immigration enforcement.

Garcetti promotes his opposition to such measures in Los Angeles, among cities that don't assist with federal immigration enforcement, where he has created a $10-million legal defense fund for immigrants threatened with deportation and defied U.S. Justice Department calls for local police to assist with enforcement of federal immigration laws when no serious crime has been committed.

Landrieu, as president of the U.S. Conference of Mayors last year, was vocal among the more than 300 mayors last year who opted for their cities to join an international climate agreement aimed at reducing greenhouse gas emissions, after the Trump administration withdrew the United States from it.

"It's a more hands-on job which can produce both more tangible results and a greater bond with your constituents," Democratic pollster Paul Maslin said. "At a time when frustration with all things Washington, federal government, is at a peak, and state governments are facing tough budget limitations, mayors start looking pretty good."

Barrow reported from Atlanta. Follow Beaumont at @TomBeaumont and Barrow at @BillBarrowAP.