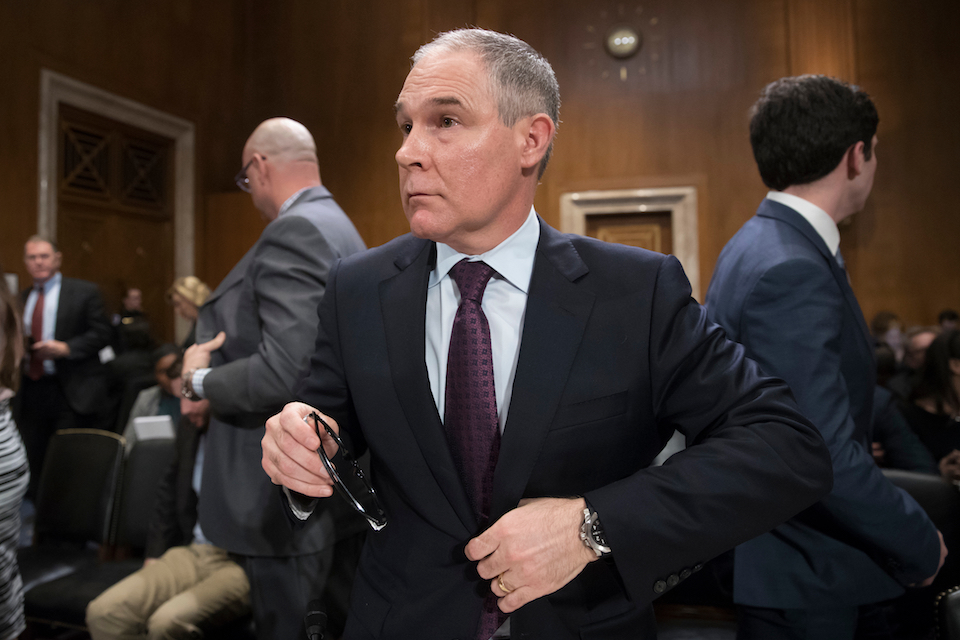 WASHINGTON (AP) — Environmental Protection Agency chief Scott Pruitt's concern with his safety came at a steep cost to taxpayers as his swollen security detail blew through overtime budgets and at times diverted officers away from investigating environmental crimes.

Altogether, the agency spent millions of dollars for a 20-member full-time detail that is more than three times the size of his predecessor's part-time security contingent.

EPA spokesman Jahan Wilcox cited "unprecedented" threats against Pruitt and his family as justification for extraordinary security expenses such as first-class airfare to keep him separate from most passengers — a perk generally not available to federal employees.

But Pruitt apparently did not consider that upgrade vital to his safety when taxpayers weren't footing the bill for his ticket. An EPA official with direct knowledge of Pruitt's security spending said the EPA chief flew coach on personal trips back to his home state of Oklahoma.

The EPA official spoke on condition of anonymity for fear of retaliation.

New details in Pruitt's expansive spending for security and travel emerged from agency sources and documents reviewed by The Associated Press. They come as the embattled EPA leader fends off allegations of profligate spending and ethical missteps that have imperiled his job.

President Donald Trump offered a full-throated defense of Pruitt in a tweet Saturday night, saying the EPA chief is "doing a great job" and downplaying the ethical questions swirling around Pruitt.

He called the security spending "somewhat more" than Pruitt's predecessor and said Pruitt had received death threats "because of his bold actions at EPA."

The EPA official knowledgeable about Pruitt's security spending says Perrotta oversaw a rapid expansion of the EPA chief's security detail to accommodate guarding him day and night, even on family vacations and when Pruitt was home in Oklahoma.

Perrotta also signed off on new procedures that let Pruitt fly first-class on commercial airliners, with the security chief typically sitting next to him with other security staff farther back in the plane. Pruitt's premium status gave him and his security chief access to VIP airport lounges.

The EPA official said there are legitimate concerns about Pruitt's safety, given public opposition to his rollbacks of anti-pollution measures.

But Pruitt's ambitious domestic and international travel led to rapidly escalating costs, with the security detail racking up so much overtime that many hit annual salary caps of about $160,000.

The demands of providing 24-hour coverage even meant taking some investigators away from field work, such as when Pruitt traveled to California for a family vacation.

Wilcox said Pruitt has faced an unprecedented number of death threats against him and his family and "Americans should all agree that members of the President's cabinet should be kept safe from these violent threats."

A nationwide search of state and federal court records by the AP found no case where anyone has been arrested or charged with threatening Pruitt. EPA's press office did not respond Friday to provide details of any specific threats or arrests.

Pruitt has said his use of first-class airfare was initiated following unpleasant interactions with other travelers. In one incident, someone yelled a profanity as he walked through the airport.

But on weekend trips home for Sooners football games, when taxpayers weren't paying for his ticket, the EPA official said Pruitt flew coach.

The source said Pruitt sometimes used a companion pass obtained with frequent flyer miles accumulated by Ken Wagner, a former law partner whom Pruitt hired as a senior adviser at EPA at a salary of more than $172,000.

Taxpayers still covered the airfare for the administrator's security detail.

Walter Shaub, who until last year ran the federal Office of Government Ethics, said it is a potential ethics violation for Pruitt to accept the airline tickets, even if Wagner didn't pay cash for them.

Federal officials are barred from accepting gifts from employees that have a market value of more than $10.

"It would be a very serious ethics problem, indeed, if Pruitt accepted airline tickets from a subordinate," Shaub said.

The EPA administrator has come under intense scrutiny for ethics issues and outsized spending. Among the concerns: massive raises for two of closest aides and his rental of a Capitol Hill condo tied to a lobbyist who represents fossil fuel clients.

In his tweet Saturday night, Trump appeared dismissive of the travel and rental issues: "Rent was about market rate, travel expenses OK."

At least three congressional Republicans and a chorus of Democrats have called for Pruitt's ouster. A review of Pruitt's ethical conduct by White House officials is underway, adding to probes by congressional oversight committees and EPA's inspector general.

Pruitt, 49, was closely aligned with the oil and gas industry as Oklahoma's state attorney general before being tapped by Trump. Trump has praised Pruitt's relentless efforts to scrap, delay or rewrite Obama-era environmental regulations. He also has championed budget cuts and staff reductions at the agency so deep that even Republican budget hawks in Congress refused to implement them.

EPA's press office has refused to disclose the cost of Pruitt's security or the size of his protective detail, saying doing so could imperil his personal safety.

But other sources within EPA and documents released through public information requests help provide a window into the ballooning costs.

In his first three months in office, before pricey overseas trips to Italy and Morocco, the price tag for Pruitt's security detail hit more than $832,000, according to EPA documents released through a public information request.

Nearly three dozen EPA security and law enforcement agents were assigned to Pruitt, according to a summary of six weeks of weekly schedules obtained by Democratic Sen. Sheldon Whitehouse of Rhode Island.

Those schedules show multiple EPA security agents accompanied Pruitt on a family vacation to California that featured a day at Disneyland and a New Year's Day football game where his home state Oklahoma Sooners were playing in the Rose Bowl. Multiple agents also accompanied Pruitt to a baseball game at the University of Kentucky and at his house outside Tulsa, during which no official EPA events were scheduled.

Pruitt's predecessor, Gina McCarthy, had a security detail that numbered about a half dozen, less than a third the size of Pruitt's. She flew coach and was not accompanied by security during her off hours, like on weekend trips home to Boston.

Pruitt was accompanied by nine aides and a security detail during a trip to Italy in June that cost more than $120,000. He visited the U.S. Embassy in Rome and took a private tour of the Vatican before briefly attending a meeting of G-7 environmental ministers in Bologna.

Private Italian security guards hired by Perrotta helped arrange an expansive motorcade for Pruitt and his entourage, according to the EPA official with direct knowledge of the trip. The source described the Italian additions as personal friends of Perrotta, who joined Pruitt and his EPA staff for an hours-long dinner at an upscale restaurant.

Perrotta's biography, on the website of his company, Sequoia Security Group, says that during his earlier stint with the Secret Service he worked with the Guardia di Finanza, the Italian finance police.

The EPA spent nearly $9,000 last year on increased counter-surveillance precautions for Pruitt, including hiring a private contractor to sweep his office for hidden listening devices and installing sophisticated biometric locks for the doors. The payment for the bug sweep went to a vice president at Perrotta's security company.

The EPA official who spoke to the AP said Perrotta also arranged the installation of a $43,000 soundproof phone booth for Pruitt's office.

At least five EPA officials were placed on leave, reassigned or demoted after pushing back against spending requests such as a $100,000-a-month private jet membership, a bulletproof vehicle and $70,000 for furniture such as a bulletproof desk for the armed security officer always stationed inside the administrator's office suite.

Those purchases were not approved. But Pruitt got an ornate refurbished desk comparable in grandeur to the one in the Oval Office.

Among the officials who faced consequences for resisting such spending was EPA Deputy Chief of Staff for Operations Kevin Chmielewski, a former Trump campaign staffer who was placed on unpaid administrative leave this year.

The prior head of Pruitt's security detail, Eric Weese, was demoted last year after he refused Pruitt's demand to use the lights and sirens on his government-owned SUV to get him through Washington traffic to the airport and dinner reservations.