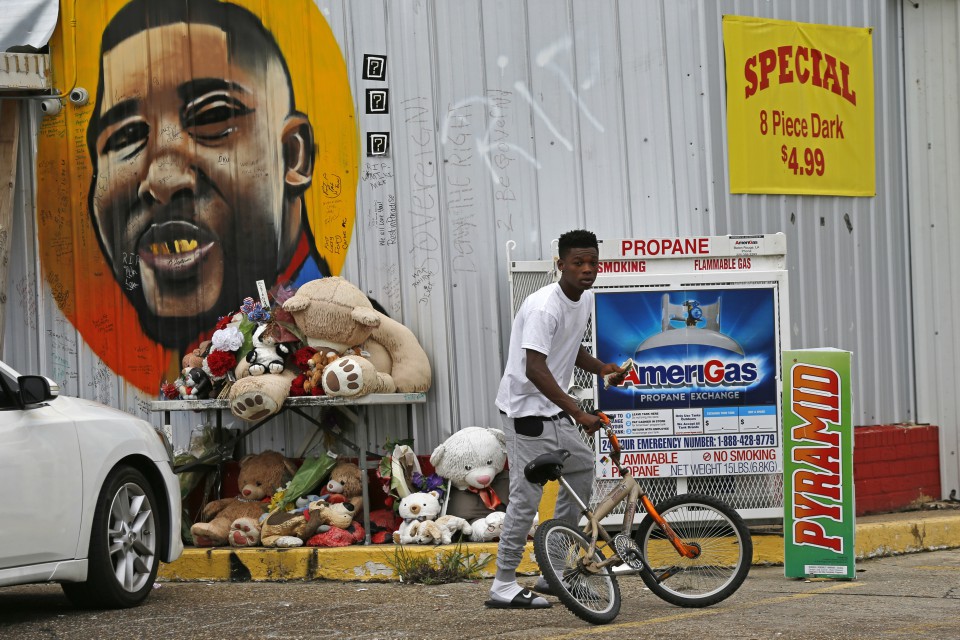 Landry made the announcement at a news conference after meeting with family members of Sterling.

Veda Washington-Abusaleh, Sterling's aunt, was in tears after meeting with Landry.

Landry said his office reviewed all of the evidence compiled by the Justice Department, including opinions issued by independent experts, and also conducted its own interviews of eyewitnesses to the shooting. He said he is "always mindful of the human element" in the case beyond his review of the facts and applicable laws.

"I know the Sterling family is hurting," Landry told reporters. "I know that they may not agree with the decision."

Landry did not take any questions from reporters after his statement. His spokeswoman, Ruth Wisher, would not say if they planned to release the body camera footage and surveillance video that hasn't been made public.

State Rep. C. Denise Marcelle, a Baton Rouge Democrat who has been involved with the case since Sterling was killed, said Landry's decision means the family will not get any justice.

"It's a sad day for Baton Rouge," she said after word spread that the officers wouldn't be charged.

Officer Blane Salamoni shot and killed Sterling during a struggle outside a convenience store where the 37-year-old Black man was selling homemade CDs. Officer Howie Lake II helped wrestle Sterling to the ground, but Lake didn't fire his gun.

The shooting came amid increased scrutiny of fatal encounters between police and Black men. Two cellphone videos of the shooting quickly spread on social media, leading to protests during which nearly 200 people were arrested. The officers' body cameras and a store surveillance camera also recorded the encounter, but those videos have not been released.

Federal authorities opened a civil rights investigation immediately after the shooting and released their findings in May 2017. They said Salamoni yelled that Sterling was reaching for a gun in his pocket before shooting him three times, and then fired three more shots into Sterling's back when he began to sit up and move.

The officers recovered a loaded revolver from Sterling's pocket. As a convicted felon, Sterling could not legally carry a gun. Sterling had pleaded guilty in 2011 to being a felon in possession of a firearm and illegally carrying a weapon and was arrested in May 2009 after an officer confronted him outside another store where he was selling CDs, court records show.

Federal authorities concluded there wasn't enough evidence to prove Salamoni or Lake willfully deprived Sterling of his civil rights, or that the officers' use of force was objectively unreasonable.

The officers encountered Sterling after responding to a report of a man with a gun outside the Triple S Food Mart. The officers told Sterling to put his hands on the hood of a car and struggled with him when he didn't comply, the Justice Department said. Lake shocked Sterling with a stun gun before the officers wrestled him to the ground, according to federal investigators.

Salamoni and Lake have remained on paid administrative leave since the July 5, 2016, shooting.

East Baton Rouge District Attorney Hillar Moore recused himself from any state criminal investigation into Sterling's death, citing his professional relationship with Salamoni's parents, who have served as police officers in Baton Rouge. Moore's recusal left Landry's office to review evidence and decide whether any state charges were warranted.

In June 2017, lawyers for Sterling's five children filed a wrongful death lawsuit against the city of Baton Rouge, its police department and former police chief, and the two officers involved. Their suit alleges the shooting fit a pattern of racist behavior and excessive force by the Baton Rouge police. It also claims poor training and inadequate police procedures led to Sterling's death.