Will Darrell 'Bubba' Wallace Change the Face of NASCAR? 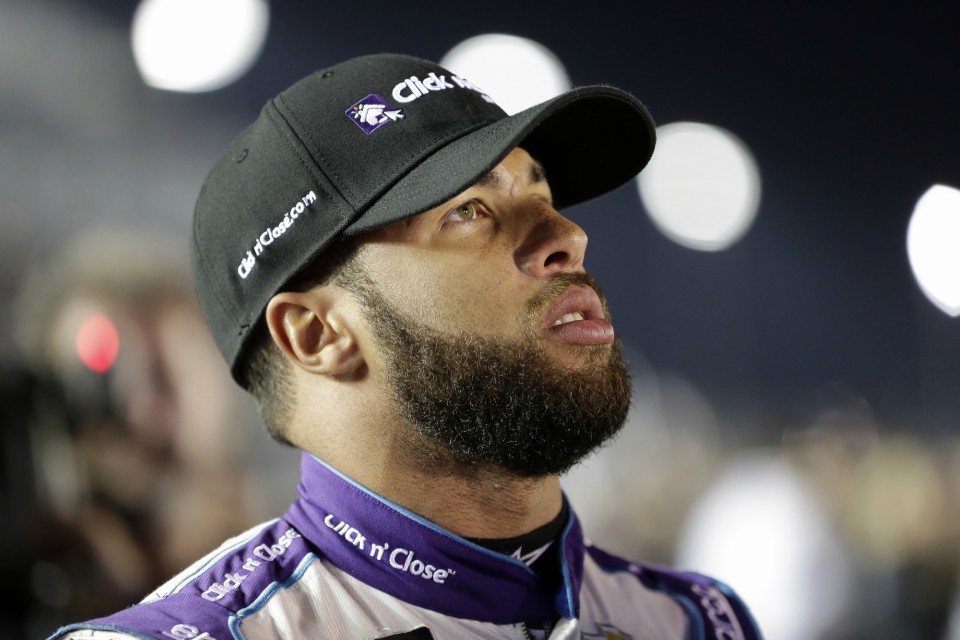 Tiger Woods changed the face of golf. Venus and Serena Williams transformed tennis. And now Darrell “Bubba” Wallace, Jr. may do the same for NASCAR.

The 24-year-old race car driver’s Cup Series debut at the iconic Daytona 500 got the nation’s attention. As NASCAR’s first full-time Black driver in its elite series since Wendell Scott in 1971, all eyes were on Wallace. Thanks to his second-place finish, the highest-ever by both a Black driver and a rookie, those eyes didn't waver. As Wallace traveled to Hampton, Ga., to race the Folds of Honor Quiktrip 500 on Feb. 25 at the Atlanta Motor Speedway, fan attention stayed riveted on him.

Even by NASCAR’s super media and fan-friendly standards, Wallace did a lot that Friday prior to the Quicktrip 500. On top of the requisite press conference, he squeezed in multiple one-on-one interviews, mostly with local Atlanta TV media. Instead of downplaying the attention paid to his race, Wallace, whose father is White, has embraced it.

“There is only one driver from an African-American background at the top level of our sport. I am the one. You’re not gonna stop hearing about 'the Black driver' for years. Embrace it, accept it and enjoy the journey,” he tweeted November 8, 2017.

Embracing his race doesn’t mean dwelling on it though. “You can psych yourself up by reading all the history and whatnot and doing all of that but that just puts too much pressure on yourself,” he said during an interview at the Atlanta Motor Speedway.

“I’ve learned to focus on driving aspect and to let everything else settle in behind.”

Wallace, who was born in Mobile, Ala. and raised in Concord, N.C., began racing go-karts when he was nine. By 16, he was competing in the NASCAR K&N Pro Series East, the sport's main developmental series for grooming its next generation, as part of NASCAR’s Drive for Diversity initiative. He won his very first race at the Greenville-Pickens Speedway, becoming the youngest driver to ever win at that track. After another win, he finished third overall in the series and received the Rookie of the Year award, a first for an African American driver.

He won three more times in 2011. Driving for Joe Gibbs Racing TEAM in 2012, he held his own, staying near the top and even winning one race. He had five wins in two years. In 2014, he finished third overall while driving the truck series with Kyle Busch Motorsports. He followed that up by driving with Roush Fenway Racing in the Xfinity Series from 2015 to 2017. When Aric Almirola was injured last year, Wallace filled in by driving for the iconic Richard Petty Motorsports. His stellar performance prompted a welcome as their full-time driver of the legendary no. 43, now a Chevrolet Camaro ZL1, for the 2018 season.

NASCAR Hall of Famer Richard Petty, nicknamed “The King” for a career that includes seven NASCAR Championship and Daytona 500 wins strongly believes Wallace is a future NASCAR star. The NASCAR legend said he saw Wallace as part of the sport's future. “NASCAR’s face, as far as driving, is changing,” Petty said. “It changes every 12 to 14 years; we’re right in the middle of that. That was one of the reasons I was looking for a younger driver. Of all the ones that we looked at, we thought Bubba was going to be as good or better than any of the rest of them, personality-wise, driver-wise, sponsor-wise, the whole deal.”

Bill Lester, the historic Black NASCAR driver who raced two Cup-level races in 2006 and garnered seven Top 10 finishes in the truck series from 2000 to 2007, champions Wallace but warns that the lack of major sponsorship is a huge obstacle.

“If they do not get more corporate support, they’re going to struggle,” Lester said of Wallace and his team via telephone.

“I always had a good looking car but, when it came to everything that was necessary to [run] at the front, I didn’t have it and that was because I just didn’t have the resources that the top-running teams had and he is in the same position.”

NASCAR sponsorship is a revolving door so any race week, sponsors can step up. This gave Wallace an opportunity to attract nontraditional sponsorship like the Black-owned, Columbus, Ohio-based moving company E.E. Ward. Brian Brooks, co-owner of the company founded by former Underground Railroad conductor John T. Ward in 1881 that also counts Richard Petty Motorsports as a client, shared that their support of Wallace in Atlanta, especially during Black History Month, was a very hopeful gesture.

“I think it would be a disgrace if we have to wait another 50 years for someone to come after Bubba to be a driver of color in NASCAR,” Brooks said via phone.

To be a strong contender, Lester insists that Wallace needs Fortune 500 support. “With him not having full sponsorship, which is about an $18 million to $20 million proposition per year these days, he’s at a deficit,” Lester said.

Like many in NASCAR, Derrell Edwards, a former college basketball player turned Austin Dillon pit crew member who is believed to be the first African-American over-the-wall crew member for a Daytona 500 winner, feels that Wallace’s success is a good look for NASCAR’s future. “I think a lot of the people are going to gravitate towards him …. and it’s going to be great for the culture,” he said.

“We’re lacking in that department when it comes to NASCAR,” Wallace said in conversation regarding the potential impact he and his team could have on increasing Black representation in the sport. “For us to be able to go out and do what we do on the racetrack and try to be the best, I think it’s going to help that number grow.”