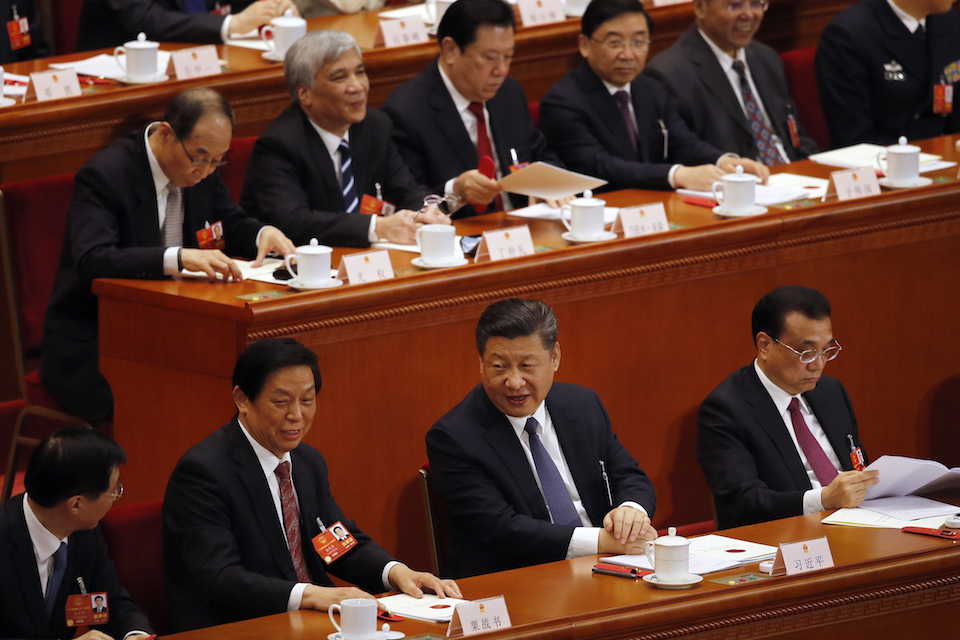 The amendment upends a system enacted by former Chinese leader Deng Xiaoping in 1982 to prevent a return to the bloody excesses of a lifelong dictatorship typified by Mao Zedong's chaotic 1966-1976 Cultural Revolution.

"This marks the biggest regression in China's legal system since the reform and opening-up era of the 1980s," said Zhang Lifan, an independent Beijing-based political commentator.

"I'm afraid that this will all be written into our history in the future," Zhang said.

Voting among the National People's Congress' nearly 3,000 hand-picked delegates began in the mid-afternoon, with Xi leading members of the Communist Party's seven-member all-powerful Politburo Standing Committee in casting their votes. He placed his orange ballot paper in a red box bearing the official seal of state placed front and center on the stage inside the cavernous hall.

Rank-and-file deputies then rose to vote on the floor of the hall as jaunty instrumental music played. Ten minutes later, the process had ended and delegates were asked to return to their seats while the votes were counted.

Shortly after 3:50 p.m., the results were read out over the public address system and flashed briefly on a screen in the hall. The delegates voted 2,958 in favor, with two opposed, three abstaining and one vote invalidated.

"The constitutional amendment item has passed," the announcer declared to polite applause.

The 64-year-old Xi appeared to show little emotion, remaining in his seat with other deputies to listen to a report on the work of the congress delivered by its outgoing chairman.

The slide toward one-man rule under Xi has fueled concern that Beijing is eroding efforts to guard against the excesses of autocratic leadership and make economic regulation more stable and predictable.

The head of the legislature's legal affairs committee, Shen Chunyao, dismissed such concerns as "speculation that is ungrounded and without basis."

Shen told reporters the party has accumulated extensive experience over its 90-year history that has led to a system of orderly succession to "maintain the vitality and long-term stability of the party and the people."

"We believe in the future that we will continue with this path and discover an even brighter future," Shen said.

The amendment also inserted Xi's personal political philosophy into the preamble of the constitution and phrasing that emphasizes the leadership of the ruling Communist Party.

"It is rare nowadays to see a country with a constitution that emphasizes the constitutional position of any one political party," said Zhang, the political commentator.

In a sign of the issue's sensitivity, government censors have aggressively scrubbed social media of expressions ranging from "I disagree" to "Xi Zedong." A number of prominent Chinese figures have publicly protested the move, despite the risk of official retaliation.

Officials have said the abolishing of the presidential term limits is aimed only at bringing the office of the president in line with Xi's other positions atop the Communist Party and the Central Military Commission, which do not impose term limits.

While some scholars questioned the wisdom of the move, others said they saw value in sending the message that Xi would be setting policy for many years to come.

"In fact, the more Xi Jinping's position is consolidated and the longer his governing time is to last, the more secure it is for the continuity of the policies," said Liu Jiangyong, a professor at Renmin University's School of International Relations. 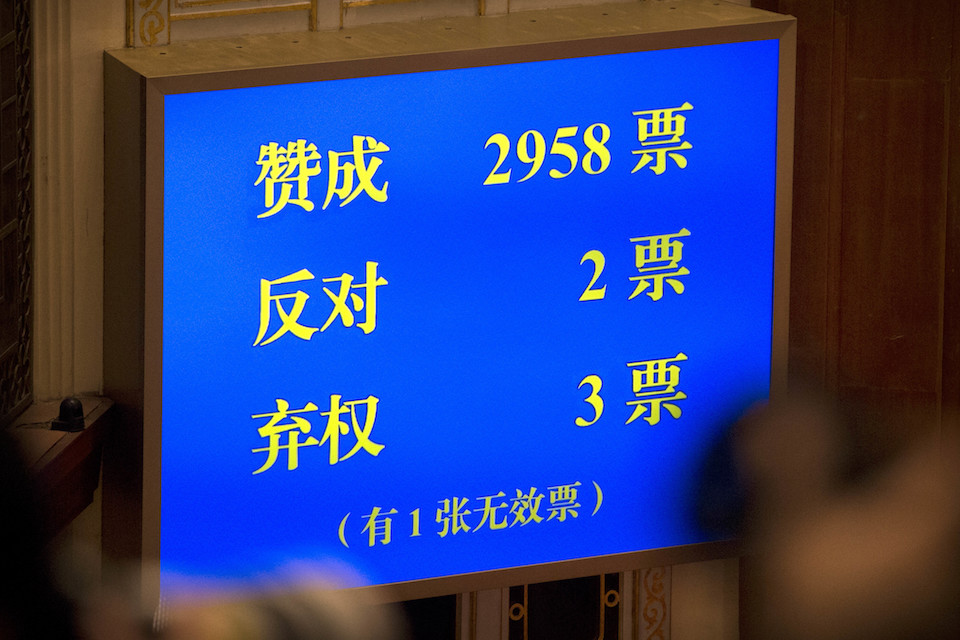 A screen shows the results of a vote on an constitutional amendment during a plenary session of China's National People's Congress (NPC) at the Great Hall of the People in Beijing, Sunday, March 11, 2018. China's rubber-stamp lawmakers on Sunday passed a historic constitutional amendment abolishing presidential term limits that will enable President Xi Jinping to rule indefinitely. The totals shown are 2,958 approve, 2 oppose, 3 abstain. (AP Photo/Mark Schiefelbein)

The move is widely seen as the culmination of Xi's efforts since being appointed leader of the party in 2012 to concentrate power in his own hands and defy norms of collective leadership established over the past two decades. Xi has appointed himself to head bodies that oversee national security, finance, economic reform and other major initiatives, effectively sidelining the party's No. 2 figure, Premier Li Keqiang.

To be sure, Xi's confident, populist leadership style and tough attitude toward official corruption have won him a significant degree of popular support.

Zhao Minglin, 32, a vice president of an investment firm in Beijing, said it was easier for Xi to carry out his ambitious vision of raising living standards in China if more power were concentrated in his hands.

"I will definitely support this constitutional amendment and this government. This is a powerful and strong government," Zhao said. He added, however, that he was concerned that the public discourse lacked a space for dissenting voices.