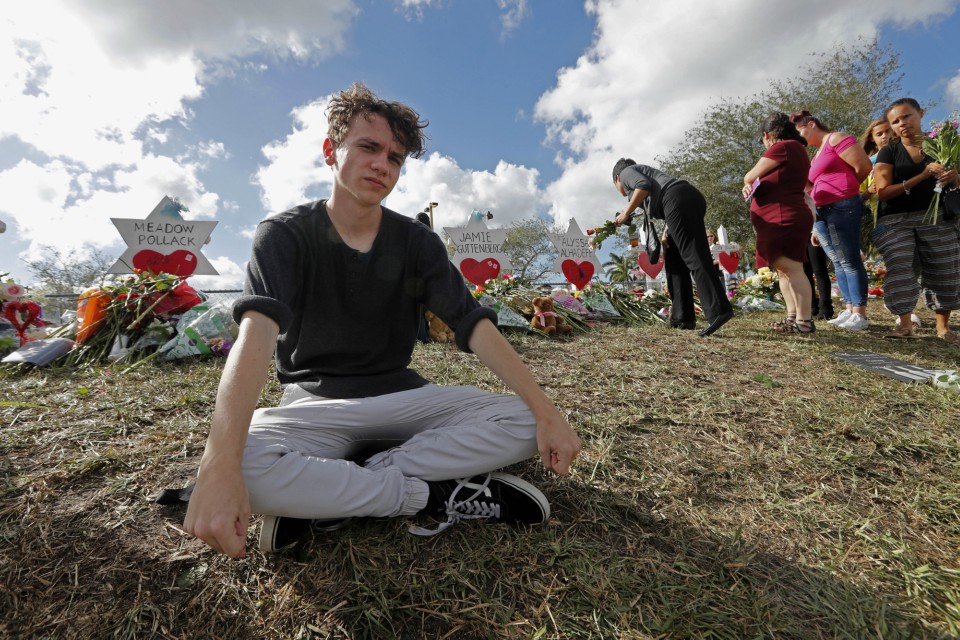 PARKLAND, Fla. (AP) — Chris Grady was a theater kid counting down the days until he reported for duty in the U.S. Army this summer when a gunman opened fire at his Florida school. As he huddled in his classroom at Marjory Stoneman Douglas High School last Wednesday listening to shots nearby, what he felt wasn't fear, but anger.

Grady's anger deepened the day after the shooting, when he heard news that the FBI had failed to follow up on a tip about the former student who police say gunned down 14 students and three staff members with an AR-15 styled rifle. News also emerged that Nikolas Cruz had legally purchased the gun despite a documented history of mental health issues.

The FBI received a tip last month that Cruz had a "desire to kill" and access to guns and could be plotting an attack, but agents failed to investigate, the agency acknowledged Friday. Others had received warnings as well: Records show the Florida Department of Children and Families investigated but concluded Cruz wasn't a danger to himself or others.

On Friday, as gun-control debates raged anew on social media, one of Grady's close friends created a Twitter account, @NeverAgainMSD, to channel the students' anger and frustration.

"The Never Again movement started formulating, and we got to work," Grady said.

Grady and his friend are among about 100 Stoneman Douglas students heading to Florida's capital, Tallahassee, to push lawmakers to do something to stop gun violence. They also plan to maintain the momentum by attending what they hope will be a massive march on Washington next month.

The efforts have offered students a way to channel their anger and sadness into action. Grady's life was upended by the shooting. But now, as one of the organizers behind the students' call for stricter gun-control laws, he is laser-focused on planning and media interviews.

On Tuesday, he will ride a bus to Tallahassee. On Wednesday, he and a small group of Never Again organizers will fly back to Parkland for a televised town hall meeting about the shooting. Then their focus will turn to the planned March for Life in the nation's capital March 24.

That doesn't leave a lot of time for school.

"If we've got to take some extra days off, that's fine to continue the movement," he said.

"Academics have been put on the back burner."

Before the shooting, Chris' time was spent studying theater and working out to get his body in shape for the Army, where he wants to pursue a career in information technology. The second-oldest of four kids, he moved to Parkland from Massachusetts when he was 6. His mother is a property manager, and his step-father is an electrician.

Given his interest in a military career, Chris said he is not anti-gun and supports the Second Amendment. But he believes assault rifles such as the AR-15 styled rifle that authorities say Cruz used should be reserved for the military.

"They're weapons of war made to kill as many people as possible in as short a time as possible," he said.

Grady said he's ready to work as much as it takes to keep the gun-control movement's momentum going until he ships out.

"The kids in Newtown were too young to understand what happened and were too young to have their own voice," he said, referring to the 20 first-graders killed in the 2012 Connecticut school shooting. "We want to be the voice for those kids and thousands of others who have been affected by tragedies like this."