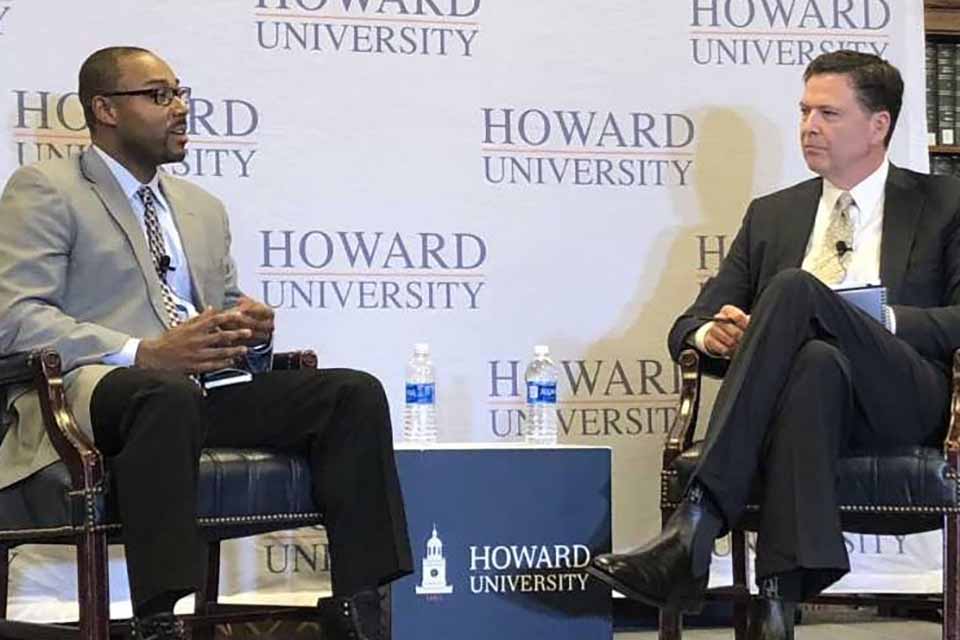 The report, entitled “Black Extremists Likely Motivated to Target Law Enforcement Officers,” has raised concern among many, including the 49-member Congressional Black Caucus, which met with the current FBI directly shortly after the report’s release last August.

Comey said he was not aware of it while he was with the FBI.

“The memo that generated all of the controversy was written after I was fired, so I don’t know exactly,” said Comey who was released May 2017 by President Donald Trump following Comey’s refusal to drop an investigation into Russian tampering in U.S. elections.  “I never heard the term ‘black identity extremists’ while I was director.”

Still, Comey offered his interpretation of what the report might have been trying to say.

“I think what it is, is an effort in the domestic terrorism part of the counterterrorism division to understand the threat that might be coming from people who by a distorted view of their own race believe they have to engage in acts of violence,” Comey said.

Ironically, the FBI’s counterterrorism division assessment made news shortly before a 32-year-old woman was killed and 19 others were injured when a white supremacist rammed his car into a group of counter-protesters in August of last year during the “Unite the Right” rally in Charlottesville, Va. Despite terrorizing minorities, LGBTQ community members, Jews and Catholics for over a century, committing atrocities designed to induce a state of terror, no white supremacist groups have ever been designated as a terrorist organization.

Comey, the Gwendolyn S. and Colbert I. King Endowed Chair in Public Policy at Howard, was joined in a discussion on law enforcement and race by Justin Hansford, executive director of the newly-opened Thurgood Marshall Civil Rights Center in the Howard University School of Law.

Comey said his life had been affected by issues of race when he was a student at College of William and Mary, the nation’s second oldest college. A friendship with one of few Black students on campus had a major impact on his life, he said. Comey said he had almost no interaction with African Americans early in his life.

“There was only one other Black family that lived in my town on my street, the Jacksons,” he said, “almost an entirely White high school. William and Mary just by accident puts me in a suite with another 18-year-old from inner city Philadelphia named Greg Samson, who’s African American, and our lives couldn’t have been more different,” he said.

Comey stated that his friendship with Samson affected him tremendously.

“It lit a flame in me to understand different people,” he said.

He wrote a series of articles on the experiences of Black students and faculty as a campus journalist.

“All of that came together and I decided, ‘You know what, I think I’d be better in seeking justice as a lawyer,’ because that’s where justice is found,” he said.

As Comey and Hanford spoke, protestors demonstrated and chanted outside the university’s historical Founders Library. The protestors were members of HU Resist, a Howard student collation organized to change the campus and the surrounding community.

According to HU Resist member Alexis McKinney, the organization opposes Comey because “he is responsible for the people like Rakem Balogun, formerly known as Christopher Daniels, being targeted and persecuted for ‘Black identity extremism.’”

Balogun of Dallas was under surveillance by the FBI for two years before they raided his home and arrested him in December 2017. Items taken from his home included a .38 caliber handgun, an assault rifle and the book, Negroes With Guns by Robert F. Williams. Balogun was indicted on unlawful possession of a firearm.

“We thought it important to continue our resistance to Comey, despite the ambivalence of our classmates,” McKinney said, “because at the end of the day, he’s a symbol of institutionalized white supremacy and state oppression.”

Hansford challenged Comey in the discussion and dismissed his assertions that many problems between police and African Americans are caused by a few “bad apples.”

“The FBI has a very challenging history with the black community,” he added, referring to the many years the FBI under director J. Edgar Hoover, spied on, hounded African American leaders and organizations beginning with Marcus Garvey in the 1920s, the Rev. Martin Luther King Jr., the NAACP, Malcolm X and the Nation of Islam in the 1950s and 60s and the Black Panthers in the 1970s.

Comey said he tried to address the FBI’s history of misdeeds regarding African Americans while director. He said he wanted agents and analysts to study the organization’s history of misconduct, including programs such as Cointelpro, a counterintelligence program used heavily in the 1960s to surveil civil and human rights organizations.

“I tried to make the FBI stare at that history,” he said.  “I’m a believer that transparency is to include. I commissioned a course at Quantico, where every new agent and analyst of the FBI studies the history of the FBI, with special emphasis on the FBI’s interaction with Dr. King, and you know that horrific history.”

He further explained that at the end of the course, all the trainees go to the King memorial in the nation’s capital where they are assigned a final project. They must pick something Dr. King said on those two stones and write an essay about how the quote intertwines with the FBI’s values.

Even with those programs, Comey said, his efforts were “probably not enough” to bridge the divide and mistrust between African Americans and the FBI.