African-American GIs of WWII: Fighting for Democracy Abroad and at Home 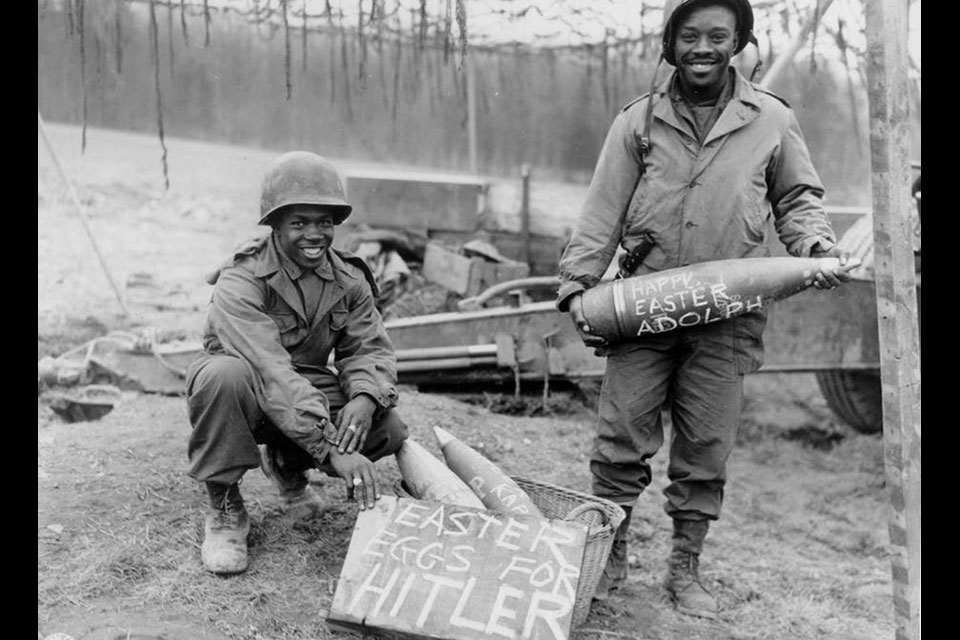 Until the 21st century, the contributions of African American soldiers in World War II barely registered in America’s collective memory of that war.

The “tan soldiers,” as the Black press affectionately called them, were also for the most part left out of the triumphant narrative of America’s “Greatest Generation.” In order to tell their story of helping defeat Nazi Germany in my 2010 book, A Breath of Freedom: The Civil Rights Struggle, African American GIs, and Germany

, I had to conduct research in more than 40 different archives in the U.S. and Germany.

When a German TV production company, together with Smithsonian TV, turned that book into a documentary, the filmmakers searched U.S. media and military archives for two years for footage of Black GIs in the final push into Germany and during the occupation of post-war Germany.

They watched hundreds of hours of film and discovered less than 10 minutes of footage. This despite the fact that among the 16 million U.S. soldiers who fought in World War II, there were about one million African American soldiers.

They fought in the Pacific, and they were part of the victorious army that liberated Europe from Nazi rule. Black soldiers were also part of the U.S. Army of occupation in Germany after the war. Still serving in strictly segregated units, they were sent to democratize the Germans and expunge all forms of racism.

It was that experience that convinced many of these veterans to continue their struggle for equality when they returned home to the U.S. They were to become the foot soldiers of the civil rights movement – a movement that changed the face of our nation and inspired millions of repressed people across the globe.

As a scholar of German history and of the more than 70-year U.S. military presence in Germany, I have marveled at the men and women of that generation. They were willing to fight for democracy abroad, while being denied democratic rights at home in the U.S. Because of their belief in America’s “democratic promise” and their sacrifices on behalf of those ideals, I was born into a free and democratic West Germany, just 10 years after that horrific war.

Fighting racism at home and abroad

By deploying troops abroad as warriors for and emissaries of American democracy, the military literally exported the African American freedom struggle.

Beginning in 1933, when Adolf Hitler came to power, African American activists and the Black press used white America’s condemnation of Nazi racism to expose and indict the abuses of Jim Crow at home. America’s entry into the war and the struggle against Nazi Germany allowed civil rights activists to significantly step up their rhetoric.

“You jim crowed me / Before hitler rose to power- / And you are still jim crowing me- / Right now this very hour.” 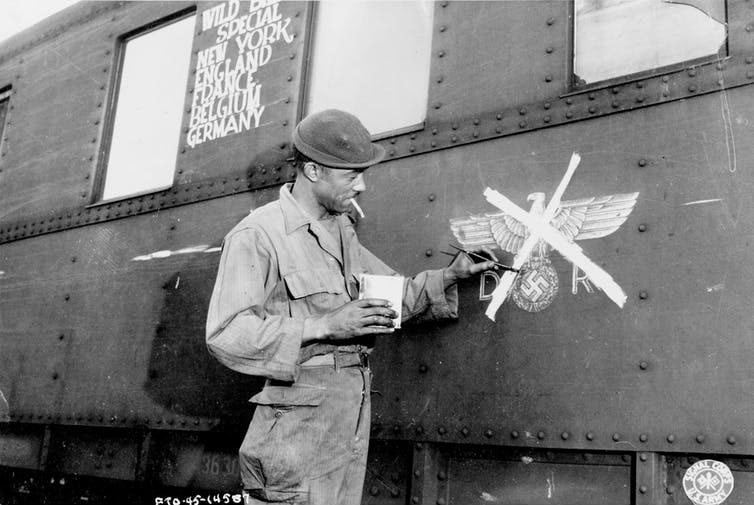 Private First Class Eugene Davis (375th Engineer Battalion) paints over the swastika on a railroad car in Pallenberg, Germany (Photo NARA, College Park, MD)The military brass, disproportionately dominated by white Southern officers, refused. They argued that such a step would undermine military efficiency and negatively impact the morale of White soldiers. In an integrated military, Black officers or NCOs might also end up commanding white troops. Such a challenge to the Jim Crow racial order based on white supremacy was seen as unacceptable.

Believing that fighting for American democracy abroad would finally grant African-Americans full citizenship at home, civil rights activists put pressure on the U.S. government to allow African American soldiers to “fight like men,” side by side with White troops.

The manpower of Black soldiers was needed in order to win the war, but the military brass got its way; America’s Jim Crow order was to be upheld. African Americans were allowed to train as pilots in the segregated Tuskeegee Airmen. The 92nd Buffalo Soldiers and 93rd Blue Helmets all-Black divisions were activated and sent abroad under the command of white officers.

Despite these concessions, 90 percent of Black troops were forced to serve in labor and supply units, rather than the more prestigious combat units. Except for a few short weeks during the Battle of the Bulge in the winter of 1944 when commanders were desperate for manpower, all U.S. soldiers served in strictly segregated units. Even the blood banks were segregated.

‘A Breath of Freedom’

After the defeat of the Nazi regime, an Army manual instructed U.S. occupation soldiers that America was the “living denial of Hitler’s absurd theories of a superior race,” and that it was up to them to teach the Germans “that the whole concept of superiority and intolerance of others is evil.” There was an obvious, deep gulf between this soaring rhetoric of democracy and racial harmony, and the stark reality of the Jim Crow army of occupation. It was also not lost on the Black soldiers.

Post-Nazi Germany was hardly a country free of racism. But for the Black soldiers, it was their first experience of a society without a formal Jim Crow color line. Their uniform identified them as victorious warriors and as Americans, rather than “Negroes.”

Serving in labor and supply units, they had access to all the goods and provisions starving Germans living in the ruins of their country yearned for. African-American cultural expressions such as jazz, defamed and banned by the Nazis, were another reason so many Germans were drawn to their black liberators. White America was stunned to see how much black GIs enjoyed their time abroad, and how much they dreaded their return home to the U.S.

By 1947, when the Cold War was heating up, the reality of the segregated Jim Crow Army in Germany was becoming a major embarrassment for the U.S. government. The Soviet Union and East German communist propaganda relentlessly attacked the U.S. and challenged its claim to be the leader of the “free world.” Again and again, they would point to the segregated military in West Germany, and to Jim Crow segregation in the U.S. to make their case.

Newly returned veterans, civil rights advocates and the black press took advantage of that Cold War constellation. They evoked America’s mission of democracy in Germany to push for change at home. Responding to that pressure, the first institution of the U.S. to integrate was the U.S. military, made possible by Truman’s 1948 Executive Order 9981. That monumental step, in turn, paved the way for the 1954 Supreme Court decision in Brown v. Board of Education.

The veterans who had been abroad electrified and energized the larger struggle to make America live up to its promise of democracy and justice. They joined the NAACP in record numbers and founded new chapters of that organization in the South, despite a wave of violence against returning veterans. The veterans of World War II and the Korean War became the foot soldiers of the civil rights movement in the 1950s and 1960s. Medgar Evers, Amzie Moore, Hosea Williams and Aaron Henry are some of the better-known names, but countless others helped advance the struggle.

About one-third of the leaders in the civil rights movement were veterans of World War II.

They fought for a better America in the streets of the South, at their workplaces in the North, as leaders in the NAACP, as plaintiffs before the Supreme Court and also within the U.S. military to make it a more inclusive institution. They were also the men of the hour at the 1963 March on Washington, when their military training and expertise was crucial to ensure that the day would not be marred by agitators opposed to civil rights.

“We structured the March on Washington like an army formation,” recalled veteran Joe Hairston.

For these veterans, the 2009 and 2013 inaugurations of President Barack Obama were triumphant moments in their long struggle for a better America and a more just world. Many never thought they would live to see the day that an African-American would lead their country.