Trump Lashes out at Schiff Over Russia Probe Memo 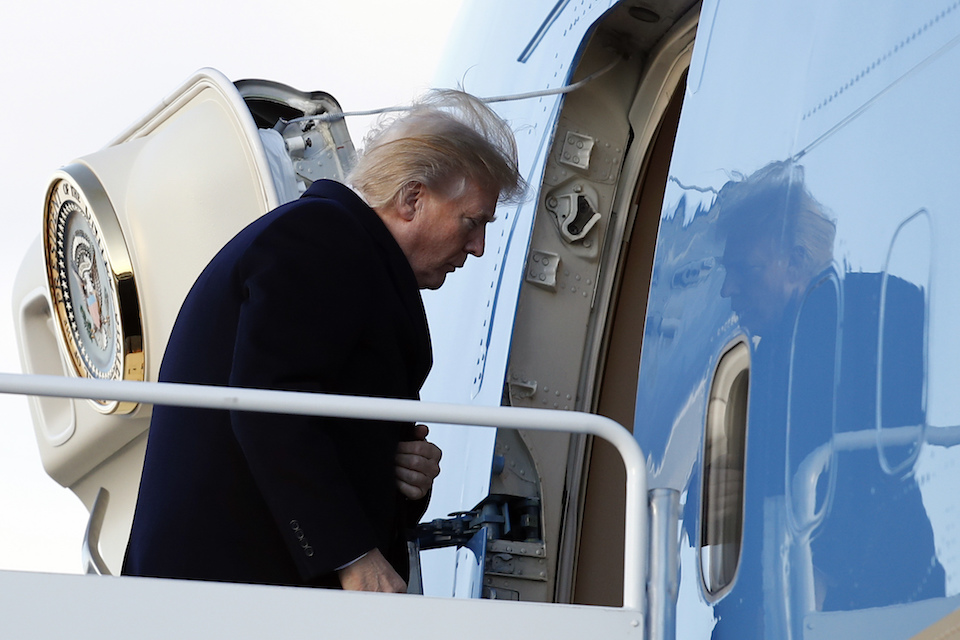 WASHINGTON (AP) — President Donald Trump traded insults with the top Democrat on the House Intelligence Committee Monday, a day after Democrats and Republicans said Trump was wrong to assert that a GOP-produced classified memo on FBI surveillance powers cleared him in the Russia investigation.

Trump's attack on California Rep. Adam Schiff came before a planned meeting of the House intelligence panel Monday, where the committee is expected to consider whether to release a Democratic rebuttal memo. Democrats are seeking to push back on the Republican document, which questions the FBI methods used to apply for a surveillance warrant on a onetime Trump campaign associate.

On Twitter, Trump called Schiff "one of the biggest liars and leakers in Washington," adding that he "must be stopped."

Schiff quickly shot back: "Instead of tweeting false smears, the American people would appreciate it if you turned off the TV and helped solve the funding crisis, protected Dreamers or ... really anything else."

Trump also praised Committee Chairman Rep. Devin Nunes, R-Calif., on Twitter, calling him a man of tremendous courage and grit, may someday be recognized as a Great American Hero for what he has exposed and what he has had to endure!"

The committee did not release the Democratic memo last week, with one Republican member saying revisions were needed so the memo would not endanger national security.

Key Democrats are seeking to put out the document, including the Senate's Democratic leader, Chuck Schumer of New York, who urged Trump to back the public release and said that refusing to do so would show the president's intent to undermine the Russia investigation.

Trump would need to sign off on the memo if it contains classified information. A White House official said Monday that if the Democratic memo made it out of the committee, the administration would consider releasing it, subjecting it to a similar review process as the Republican memo. The official was not authorized to speak publicly and sought anonymity to discuss internal thinking.

House Speaker Paul Ryan has said he supports the release of the Democrats' memo, if sensitive intelligence information is removed.

Special counsel Robert Mueller is investigating possible collusion between the Trump 2016 presidential campaign and Russia as well as whether there have been efforts to obstruct the investigation.

Trump tweeted over the weekend that the memo "totally vindicates 'Trump' in probe" even as "the Russian Witch Hunt goes on and on." But that statement found no echo from four committee Republicans who appeared on the Sunday talk shows. Lawmakers also said the memo should not impede Mueller.

"I think it would be a mistake for anyone to suggest that the special counsel shouldn't complete his work. I support his work. I want him to finish it. I hope he finishes it as quickly as possible," said Rep. Chris Stewart, R-Utah.

Schiff has branded the GOP memo "a political hit job" and has questioned whether Nunes had coordinated with the White House in drafting the document seized on by the president to vent his grievances against the nation's premier law enforcement agencies.

The memo released Friday alleges misconduct on the part of the FBI and the Justice Department in obtaining a warrant under the Foreign Intelligence Surveillance Act to monitor former Trump campaign foreign policy adviser Carter Page and his ties to Russia. Specifically, it takes aim at the FBI's use of information from former British spy Christopher Steele, who compiled a dossier containing allegations of ties between Trump, his associates and Russia.

The underlying materials that served as the basis for the warrant application were not made public in the GOP memo. Even as Democrats described it as inaccurate, some Republicans quickly cited the memo — released over the objections of the FBI and Justice Department — in their arguments that Mueller's investigation is politically tainted.

The memo's central allegation is that agents and prosecutors, in applying in October 2016 to monitor Page's communications, failed to tell a judge that the opposition research that provided grounds for the FBI's suspicion received funding from Hillary Clinton's presidential campaign and the Democratic National Committee. Page had stopped advising the campaign sometime around the end of that summer.

Steele's research, according to the memo, "formed an essential part" of the warrant application. But it's unclear how much or what information Steele collected made it into the application, or how much has been corroborated.

Republicans say a judge should have known that "political actors" were involved in allegations that led the Justice Department to believe Page might be an agent of a foreign power — an accusation he has consistently denied.

The memo confirms the FBI's counterintelligence investigation into the Trump campaign began in July 2016, months before the surveillance warrant was sought, and was "triggered" by information concerning campaign aide George Papadopoulos. He pleaded guilty last year to lying to the FBI.

The confirmation about Papadopoulos is "the most important fact disclosed in this otherwise shoddy memo," Schiff said Saturday.