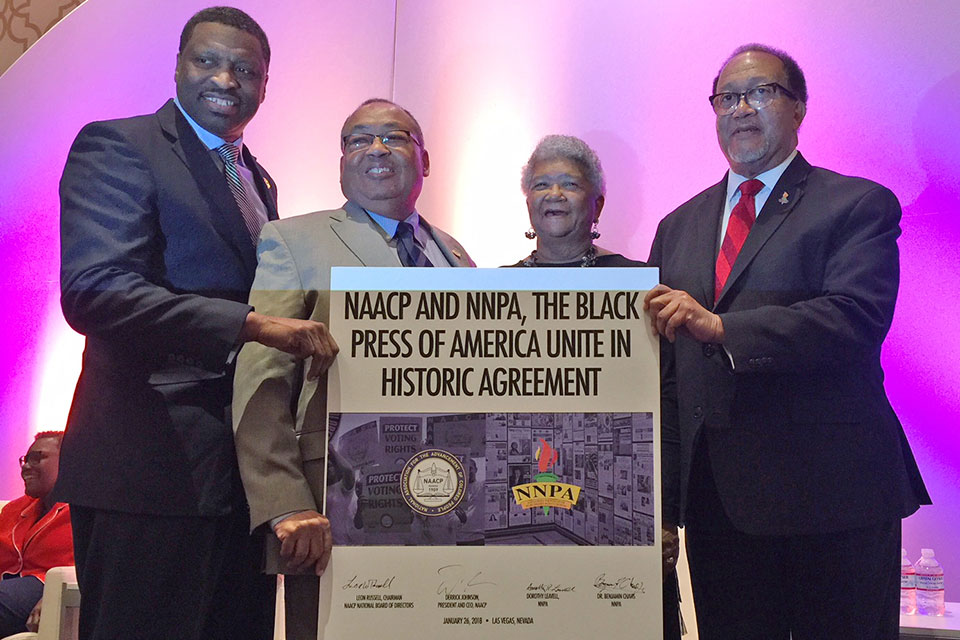 The National Newspaper Publishers Association (NNPA), a trade group representing more than 200 Black-owned media companies, signed a historic, strategic partnership with the NAACP, one of the most influential civil rights group in the world, during the NNPA’s Mid-Winter Conference in Las Vegas.

“Sometimes you have to take a step back and reconnect in order to move forward,” said NAACP chairman Leon W. Russell. “Signing this agreement is taking that step back and it says it’s time for us to recommit to each other and work together to move our people forward.”

NNPA President and CEO Dr. Benjamin F. Chavis Jr., who once served as president of the NAACP, called the partnership historic.

“This [signing] consummates a working relationship of two of the world’s largest organizations focused on the empowerment of Black people,” said Chavis.

“I attempted to do something similar in the nineties and I’m very determined now,” said Leavell. “We are going to set a precedent and I hope we will be able to repeat this with many other national organizations, because if we solidify our strength, things will be different for all of us in the United States of America.”

Derrick Johnson, the president and CEO of the NAACP, said one of the things he and Russell share in common is the rich tradition of the NAACP. 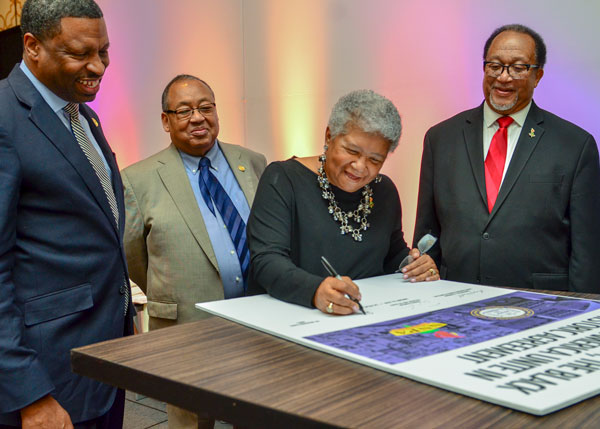 Dorothy Leavell (2nd from right), the chairman of the NNPA, signs the strategic partnership agreement between the NNPA and the NAACP designed to jointly focus on key issues that affect the Black community, as (from left-right) Derrick Johnson, the president and CEO of the NAACP; Leon Russell, the chairman of the NAACP; and Dr. Benjamin F. Chavis, Jr., the president and CEO of the NNPA, look on during the 2018 NNPA Mid-Winter Conference in Las Vegas, Nevada. (Freddie Allen/AMG/NNPA)The signing, which took place on Friday, January 26 was attended by a number of NNPA members, staffers from both organizations and Gary, Indiana Mayor Karen Freeman Wilson, the first African American woman to hold the office of mayor in the state of Indiana.

“We have to take the resources that we have in our collective communities and we have to use these resources in a way that educates our children and benefits our people,” Wilson said. “We also have to support [Black] businesses.”

Wilson added that Black consumers have to let go of the stereotype that Black businesses are inferior to White businesses.

Wilson also noted that African Americans aren’t receiving a fair shake from the federal government and, in her city, finances are a challenge she’s trying to meet head-on.

“Many of the answers depended on the state, but last night, a light bulb went on and it was that we can’t wait on the Republican governor to save Gary,” she said. “So, I said to my team that whatever the governor does or doesn’t do, we are going into the war room and we will stay there and not come out until we have a plan.”

Wilson joined Russell, Johnson, Chavis and Leavell in advocating for a strong relationship between the NAACP and the Black Press.

“If Black newspapers didn’t tell our stories, no one ever would have,” said Russell, echoing the founders of the Black Press, Samuel E. Cornish and John B. Russwurm who stated 191 years ago: “We wish to plead our own cause. Too long have others spoken for us. Too long has the public been deceived by misrepresentations, in things which concern us dearly.”