Many Puerto Ricans Adrift in US Hotels After Hurricane Maria 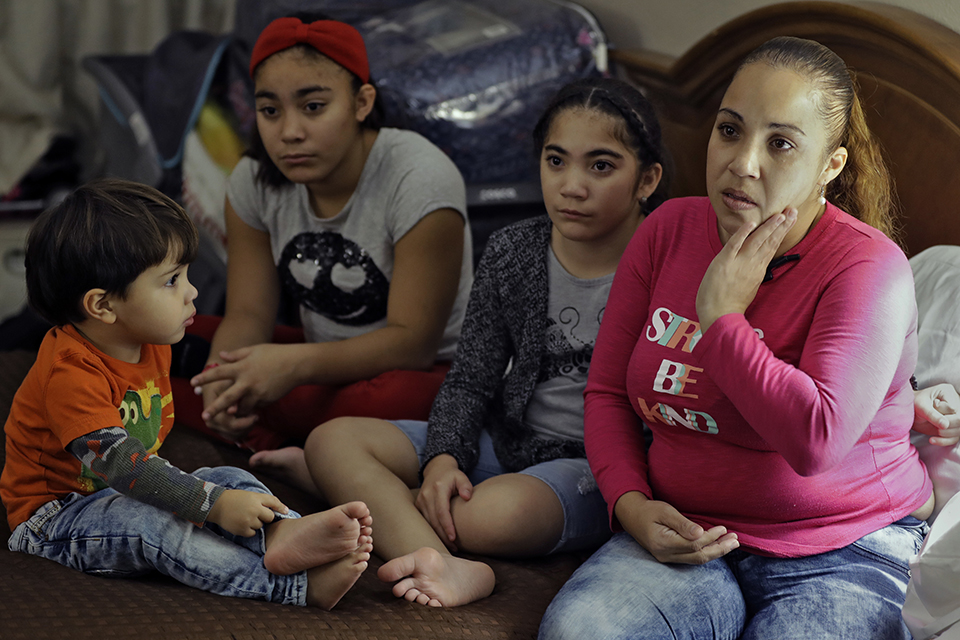 NEW YORK (AP) — After they lost their home in Puerto Rico to flooding during Hurricane Maria, Enghie Melendez fled with her family to the U.S. mainland with three suitcases and the hope it wouldn't take long to rebuild their lives. It hasn't worked out that way.

More than four months later, the family of five is squeezed into two rooms in a hotel in Brooklyn. While her husband looks for work, they are stuck in limbo, eating off paper plates and stepping over clothes in cramped quarters as they try to get settled in an unfamiliar city.

"After the hurricane hit we told the kids that every day was going to be an adventure, but not like this," said the 43-year-old Melendez. "This is turning out to be really hard."

Around the U.S., many Puerto Ricans are similarly adrift in hotels because of the Sept. 20 hurricane. The move north spared them from the misery of the storm's aftermath on the island. But the transition has often proved to be difficult, disruptive and expensive as people try to find housing, jobs, schools and even furniture and clothes to start fresh on the mainland.

Melendez and her family shuffled between staying with relatives to a homeless shelter to a small hotel in the Williamsburg section of Brooklyn, forcing her to change schools for her three daughters in the middle of the semester.

"The instability is terrible," she said as her husband, who worked as a cook at an Army base near San Juan, used a glass bottle to mash plantains to make a traditional Puerto Rican dish.

Adding to the worries for large numbers of Puerto Ricans is that hotel reimbursements from the Federal Emergency Management Agency have started to run out and many say they can't afford temporary housing without assistance.

"It's stressful," said Yalitza Rodriguez, a 35-year-old from the southern Puerto Rico town of Yauco who has been staying at a hotel in Queens with her elderly mother and husband while he looks for work. "If we don't get an extension we will have nowhere to live."

Maria destroyed between 70,000 and 75,000 homes and damaged an additional 300,000, said Leticia Jover, a spokeswoman for Puerto Rico's Housing Department. The effects of the storm included the widespread loss of power, which is still not restored in some places. Many businesses closed. The result has been an exodus to the mainland.

The Center for Puerto Rican Studies at Hunter College estimated in an October study that between 114,000 and 213,000 Puerto Ricans would move to the U.S. mainland over the next 12 months. Most were expected to settle in Florida, followed by Pennsylvania, Texas and New York.

FEMA says there are nearly 4,000 families, more than 10,000 people, receiving hotel assistance from the agency in 42 states because their homes in Puerto Rico are too damaged to occupy. The agency extended the expiration for the program from Jan. 13 to March 20 at the request of the island's governor, but all cases are reviewed for eligibility every 30 days and the payments could end for some people sooner. It's impossible to know how many are in temporary housing without any aid or staying with families.

Leslie Rivera, from the central town of Caguas, has been shuffling among hotels in Tampa, Florida, since December with her three kids, ages 13, 10 and 2. She was approved for subsidized housing and expects to be settled soon but it has been difficult.

"I feel like I am on the streets because I have no clothes. I have nothing for my kids," the 35-year-old said with tears in her eyes.

Marytza Sanz, president of Latino Leadership Orlando, which has been helping displaced families, said many don't know where they will go after FEMA stops paying for their rooms.

"There are people with five dollars in their pockets," she said. "They can't buy detergent, deodorant, medicine."

In Kissimmee, in central Florida, Desiree Torres feels nervous. She has spent more than two months in a hotel with her three children. She says she can't find a job and several local shelters have told her there is no space for her and her children.

"I can't sleep at night," said the 30-year-old Torres, who lost her home in Las Piedras, a southeastern town near where the eye of the storm first crossed the island. "I'm worried about my kids."

After the hurricane, Melendez and her family were forced to sleep for more than three weeks in their garage because of flooding and sewage that entered the home. They left their four dogs with a friend and managed to get on a humanitarian flight. They spent 10 days at Melendez's father-in-law's Manhattan apartment and a month and a half in a Brooklyn shelter. A Puerto Rican activist helped them enter the hotel.

"My kids were in a Manhattan school. We would wake up before 5 a.m. at the shelter to take them there. Now they are in a Brooklyn school," she said. "Where will they be tomorrow?"

For now, they survive on a $1,700 monthly disability payment that Melendez receives along with about $300 a month in food stamps.

Her 16-year-old daughter, Enghiemar, does her homework on the floor of the hotel room and tries to keep in touch with friends back home by text.

"I always wanted to come and live here," she said. "But not like this."