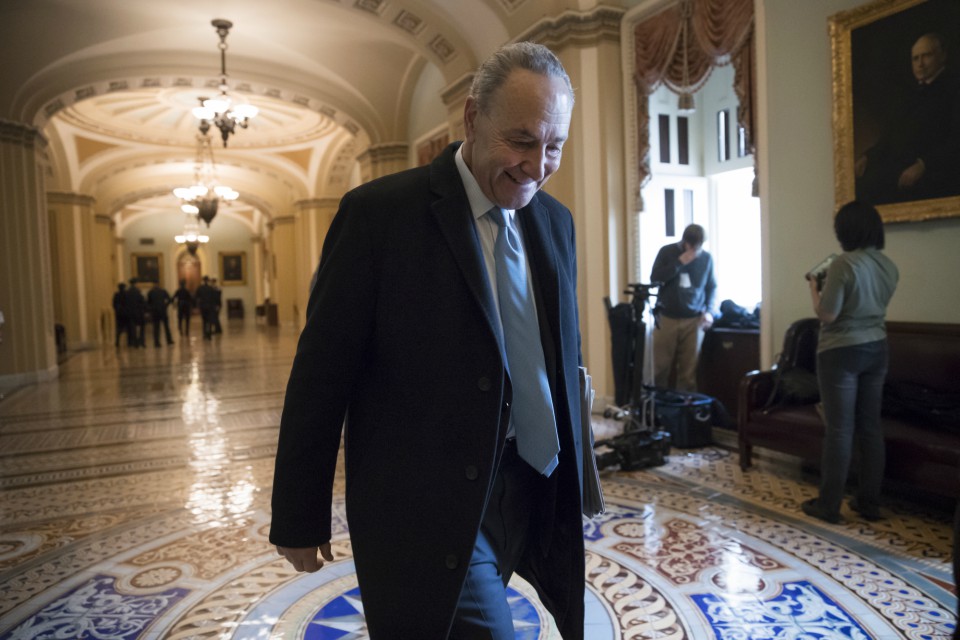 WASHINGTON (AP) — The latest on the budget battle (all times local):

The No. 2 Senate Republican says President Donald Trump is eager to involve himself in the immigration debate and "reach a solution."

Texas Sen. John Cornyn says he and five other GOP senators met Monday with Trump at the White House soon after Democrats halted their blockade against a bill ending the government shutdown.

Cornyn says they discussed how to address immigration issues "in creative ways."

Sens. Charles Grassley of Iowa, Tom Cotton of Arkansas, David Perdue of Georgia, Thom Tillis of North Carolina and James Lankford of Oklahoma also met with Trump. Several of them are among the harder-line Republicans on immigration.

President Donald Trump says he is pleased that congressional Democrats "have come to their senses" and abandoned their filibuster that shut down the federal government. Trump says his administration will make a long-term immigration deal "if and only if it's good for our country."

Trump issued a statement Monday afternoon after roughly 25 senators from both parties helped negotiate an end to the federal government shutdown. It was read by spokeswoman Sarah Huckabee Sanders at a press briefing.

Trump said he was glad the government will be funded. He continued: "Once the government is funded, my administration will work toward solving the problem of very unfair illegal immigration."

He added: "We will make a long term deal on immigration if and only if it's good for our country."

Sen. Susan Collins of Maine says Monday is "a day to celebrate" after roughly 25 senators from both parties helped negotiate an end to the government shutdown.

The Republican says the group shared a common determination to keep the government running while doing something about "Dreamers" who were brought to the country as children and are now here illegally. Collins says a group of 17 senators grew to a quarter of the Senate over the weekend.

Several Democrats who were part of that group dropped their objections Monday after Majority Leader Mitch McConnell made a final offer to try to reach bipartisan solutions on immigration and other issues by early February.

Pence says before a dinner in Jerusalem with Israeli Prime Minister Benjamin Netanyahu (neh-ten-YAH'-hoo) that the shutdown is ending "thanks to the firm stand taken by President Trump" and congressional Republicans.

Pence says Americans know a "minority" in the Senate chose to shut down the government. He said, "But the Schumer shutdown failed." He was referring to Senate Demoratic Leader Chuck Schumer.

Pence was joined by Netanyahu for statements at the prime minister's residence before dinner with their spouses.

It looks like the government shutdown will end soon.

The Senate has advanced a bill reopening federal agencies through Feb. 8 after Democrats relented and lifted their blockade against the legislation.

The shutdown began Saturday after Democrats derailed a Republican measure that would have kept government open until Feb. 16. Democrats wanted to pressure the GOP to cut a deal protecting young immigrants from deportation and boosting federal spending.

Moderates from both parties pressured leaders to end the shutdown and compromise.

The Senate vote was 81-18 — well above the 60 votes needed. The Senate still must vote on final passage to send the bill to the House.

Senate leaders have reached an agreement to reopen the government.

Democrats have yielded and ended their delaying tactics against a bill financing federal agencies through Feb. 8.

McConnell says the end to the standoff shows "the American people didn't understand" why Democrats shut down the government because they wanted to help "illegal immigrants."

The Senate has started a vote to advance the bill reopening government. It is expected to pass easily, and House approval is expected later.

Democrats are aligning behind a plan to reopen the federal government as the Senate heads toward a key vote.

Several Democratic senators predict a proposal to fund the government until Feb. 8 will move forward, overcoming a Democratic filibuster. That would clear the way for an end to the three-day shutdown.

Democrats appear to have jumped on board after two days of negotiations that ended with new reassurances from Senate Majority Leader Mitch McConnell that the Senate will consider immigration proposals in the coming weeks.

Florida Democrat Bill Nelson is predicting a resounding yes from Democrats on the plan.

Senate Majority Leader Mitch McConnell says he hopes and intends to resolve immigration and a host of other issues by early February in an effort to come to bipartisan agreement to reopen the federal government.

Senate Democrats blocked a House-passed temporary funding bill to reopen the government through Feb. 16. A pending Senate measure would last through Feb. 8.

Opening the Senate Monday, McConnell said that if they could not find bipartisan solutions on immigration, military spending, disaster aid and other issues by the Feb. 8 deadline then he would hold a vote on those matters. Top Democrat Chuck Schumer did not appear on the floor to respond.

Several members of both parties met Monday morning to try and resolve the shutdown mess.

Trump did not speak with any Democratic senators over the weekend. Asked why, Mulvaney said Trump spoke with Democrats before the shutdown and will speak to them when it is over.

But he says: "we are not going to negotiate immigration in the middle of the shutdown."

House Speaker Paul Ryan says if the Senate approves a temporary spending bill to reopen the government through Feb. 8, the House will approve it, too.

Senate Democrats had blocked a stopgap measure passed by the House to keep the federal bureaucracy operating through Feb. 16. But speaking on "Fox and Friends," Ryan says the new date works for the House.

The Wisconsin Republican also says negotiations on an immigration deal are taking place in good faith. Democrats want to protect young immigrants in the country illegally and are skeptical of Republican pledges to bring up free-standing immigration legislation next month.

Democratic Sen. Richard Blumenthal of Connecticut says on MSNBC he has "zero confidence" that Ryan will bring legislation to shield the roughly 700,000 immigrants known as "Dreamers."

President Donald Trump is accusing Democrats of prioritizing services and security for noncitizens over U.S. citizens.

Some government functions shut down over the weekend. Democrats are rejecting a funding bill until Republicans agree to protect 700,000 immigrants brought to the U.S. illegally as children.

The Republican president says in a second tweet Monday that "Democrats have shut down our government in the interests of their far left base. They don't want to do it but are powerless!"

Trump's earlier tweet appeared to undercut comments by his legislative affairs director, Marc Short, who told CNN that the immigrants in question are law-abiding and "productive to our society."

Short says the administration wants to "find a pathway for them" to stay in the U.S.

He tells "CBS This Morning" in an interview Monday: "We're going to continue crushing our adversaries whether the government's open or closed."

A dispute in Congress over spending and immigration forced scores of federal government agencies and outposts to close their doors early Saturday. But many government functions, particularly those involving national security, are considered essential and won't be affected.

Pompeo also says he doesn't agree that the stalemate on Capitol Hill that led to the shutdown is a signal of dysfunction in Washington.

He says, "The American people are having complicated discussions about their priorities." He says that's entirely appropriate in a democracy.

The government shutdown is set to complicate the beginning of the workweek. Over the weekend, the Senate inched closer but ultimately fell short of an agreement that would have reopened federal agencies.

Under the proposal taking shape, Democratic would agree to a three-week spending measure — until Feb. 8 — in return for a commitment from the Republican leadership in the Senate to address immigration policy and other pressing legislative matters in the coming weeks. But there is no agreement yet.