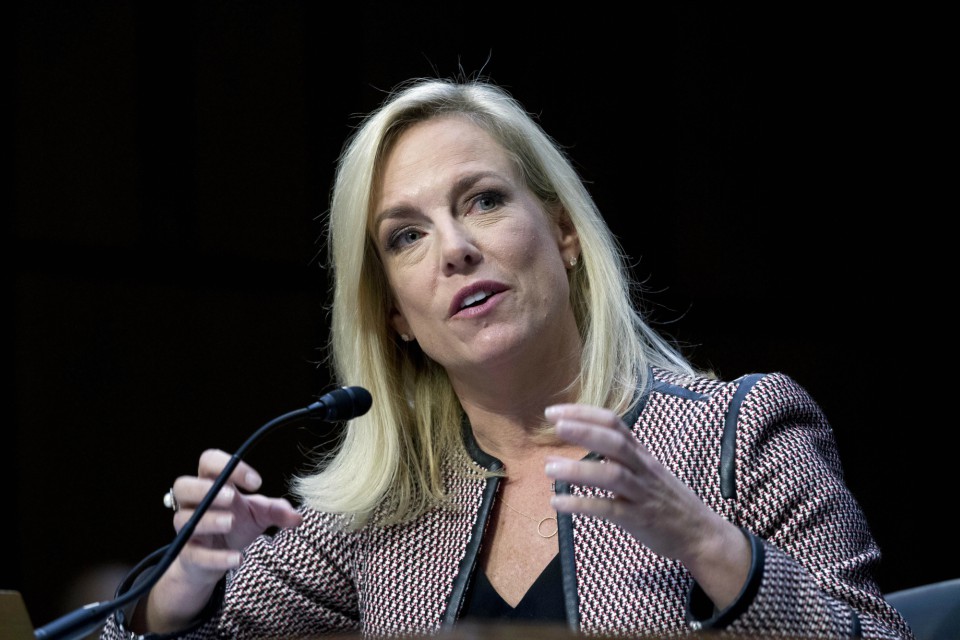 WASHINGTON (AP) — Republicans are struggling to get their stories straight as President Donald Trump's Homeland Security secretary became the latest GOP official to offer an inconclusive version of a meeting in which Trump is said to have used vulgar remarks that have been criticized as racist.

Democrats accused Republicans of selective amnesia as Cabinet member Kirstjen Nielsen testified Tuesday under oath that she "did not hear" Trump use a certain vulgarity to describe African countries. "It was a meeting of 12 people. There was cross-talk," she explained at a congressional hearing, but she didn't "dispute the president was using tough language."

"What I was struck with frankly, as I'm sure you were as well, was just the general profanity used in the room by almost everyone."

Sen. Cory Booker, D-N.J., angrily criticized Nielsen's comments, telling her during a Senate Judiciary Committee hearing: "Your silence and your amnesia is complicity."

The White House has not substantively disputed accounts of the episode, in which Trump is said to have used the term "shithole" to describe African countries of origin for potential immigrants to the U.S.

The revelations, semi-denials and continuing comments have cast a pall over the White House's legislative agenda, brought the country closer to the brink of a government shutdown and sparked international outrage.

And with the midterm elections approaching, there are fresh fears among Republicans who were already anxious over the political climate going into November — and over Trump's unpredictable actions.

Administration officials and lawmakers spent the holiday weekend debating the precise presidential vulgarity used, and moved to cast last Thursday's White House meeting as a salty affair, with expletives flying in all directions.

The White House said Trump had no intention of apologizing.

"The president hasn't said he didn't use strong language, and this is an important issue," press secretary Sarah Sanders said, "He's passionate about it, he's not going to apologize for trying to fix our immigration system."

There is internal debate in the West Wing over whether Trump said "shithole" or "shithouse." One person who attended the meeting told aides they heard the latter expletive, while others recalled the president saying the more widely reported "shithole," according to a person briefed on the meeting but not authorized to speak publicly about private conversations.

Trump has not clarified to aides what he said, but told reporters Sunday night in Florida that comments attributed to him "weren't made."

A confidant of Trump told The Associated Press that the president spent Thursday evening calling friends and outside advisers to judge their reaction to his remarks. Trump wasn't apologetic and denied he was racist, said the confidant, who wasn't authorized to disclose a private conversation and spoke on condition of anonymity.

White House officials tried to offer clarity on the two-hour period Thursday morning that saw Trump move from requesting a briefing on a potential immigration breakthrough to graphically rejecting the agreement reached by Graham and Sen. Dick Durbin, D-Ill.

Chief of staff John Kelly phoned Trump from Capitol Hill to advise him against accepting the proposal, and the president summoned conservative Republican negotiators to help build a united front against the plan, which would have provided some border security funding as well as protection from deportation for immigrants brought to the country as children and now here illegally.

A senior White House official said Trump does not believe he has an ally on this issue in Graham, a Republican who has long tried to partner with Democrats on immigration legislation.

In a hearing Tuesday, Graham said Trump expressed openness to an immigration deal, only to reject it hours later.

"I think somebody on his staff gave him really bad advice between 10 o'clock to 12 o'clock on Thursday," Graham said.

Asked about Kelly, the South Carolina Republican said the chief of staff is "a fine man, but he's part of the staff."

Sen. Tom Cotton, R-Ark., one of the lawmakers summoned to the Oval Office by the president to counter the Durbin-Graham proposal, blasted Durbin's account of the meeting in an interview.

"I'm not going to get into all the details of a private meeting. I'll just say, what Senator Durbin has portrayed is a misportrayal," Cotton told Little Rock radio station KARN on Tuesday.

"The proposal brought by Senator Durbin and Senator Graham would go in the opposite of what we need, which is a skill-based system that treats people for who they are, not where they're from," Cotton said. "It's fair to say the president reacted strongly to that."

As the firestorm over Trump's comment began late last week, the White House and Trump's National Security Council provided no guidance to the State Department about what to say to foreign countries who were incensed, said a U.S. official familiar with the conversations between the White House and other federal agencies.

Left to its own devices, the State Department came up with its own talking points to be used by U.S. missions in Africa working to stem the damage, said a U.S. official, who wasn't authorized to disclose internal deliberations and demanded anonymity.

The key message, the official said: Emphasize that the United States has a "deep respect" for people from Africa and that the U.S. relationship with any country is deeper than any one comment. Avoid confirming or denying what the president might have said, referring to it instead as an "alleged comment."