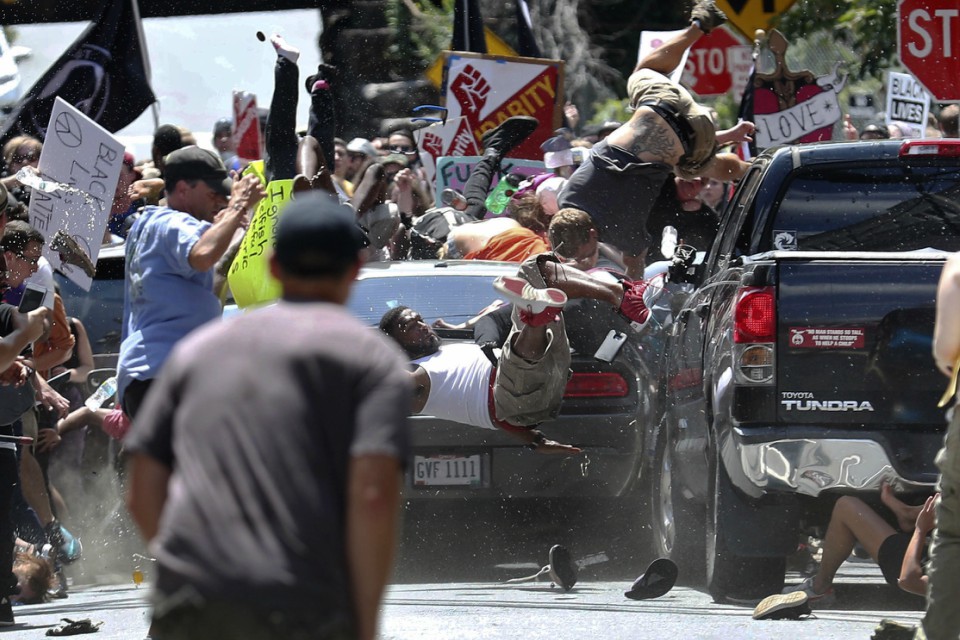 NEW YORK— The news alerts gushed in: An attack on a concert, a church, an ice cream parlor; an assailant wielding a gun or hammer or acid. There's an earthquake in Mexico, a monsoon in India, a volcanic eruption in Bali, hurricane after hurricane after hurricane. Keep up as your phone vibrates with word of your favorite actor accused of misconduct. Make that anchorman. Or politician. Or radio star.

The volatile year 2017 shook us so much and so often it felt like whiplash or worse, and that's without even considering Donald Trump, at the center of so much of the turmoil.

"It's almost like one of those horror rides at the amusement park where every time it heads into the next segment it gets worse," said noted trendspotter Marian Salzman. "Every time I turn off a device, I feel like I have anxiety because I'm not tracking the news."

The year, she said, boiled down to "disruption, despair and dumpster fires."

In retrospect, 2017's destiny seemed sealed in its opening moments.

Just after the new year dawned in Istanbul, a gunman killed 39 people at a nightclub and wounded scores more. The joy of the holiday dissolved into a scene of heartbreak outside the city morgue, where some cried and fell to the ground as they learned of a loved one's fate.

Around the world this year, vehicles were made into weapons, with trucks, cars and vans plowing down people on the Westminster and London bridges in Britain; in Times Square and on a Manhattan bike path; on a major shopping street in the Swedish capital of Stockholm; on the historic La Rambla in Barcelona.

Terrorism and other violence struck so regularly that many accepted it as a fact of life.

"It can happen anywhere as long as there is one man willing to die," said Luis Antonio Bone, 66, of Barcelona, who is retired from a cement factory job. Bone is at once realistic and defiant, saying crowded places may make him think about his safety but won't deter him from outings.

"We have to live with it," he said, "but keep living as we always have."

That kind of resilience was mustered again and again, even by some of those marked by some of the year's biggest tragedies.

In Texas, Pastor Frank Pomeroy vowed that good would persevere over evil. Pomeroy leads the rural church where a gunman killed 25 parishioners, his own 14-year-old daughter among them. "Rather than choose darkness as that young man did that day, we choose life," he said in an emotional service only a week after the rampage.

In Las Vegas, too, where 58 people were fatally shot at a music festival, some searched for optimism in the face of savagery. Jay Pleggenkuhle, a 52-year-old landscaper, helped create a memorial garden with a tree for each of the victims. Some 1,000 people volunteered to help with his project, putting aside personal or political differences to work hand in hand.

"People have really been bound together following this tragedy," he said.

A deadly chemical attack in Syria stirred people around the globe. Missile launches by North Korea brought angst that nuclear war was nearing. Rallies by white supremacists, wearing white hoods and clasping torches, roused uncomfortable memories of the United States' past. All of it broke with such ferocity, it seemed impossible to focus on any one incident too long.

"Even something like a mass shooting that killed 50 people, the story moves on in just a couple weeks," said Lauren Wright, a lecturer on politics and public affairs at Princeton University.

In Egypt, twin Palm Sunday attacks ambushed Coptic Christians and a November assault on a crowded mosque killed more than 300. In Britain, 22 people died when a suicide bomber detonated a backpack full of explosives after an Ariana Grande show.

Three major storms — Harvey, Irma and Maria — battered Puerto Rico and much of the Caribbean, as well as Texas and Florida, as 2017 went down as one of the most active hurricane seasons in recorded history. Fires tore through California and Portugal; earthquakes rocked Mexico, Iran and Iraq; flooding and an avalanche covered parts of Italy; mudslides leveled homes in Sierra Leone; and a deadly monsoon pummeled India, Nepal, Pakistan, and Bangladesh.

In hotspots around the world, people sought escape. Amnesty International estimated 73,000 refugees took to the Mediterranean in the first half of the year alone, with about 2,000 dying along the way. In Myanmar, the military has been conducting a brutal ethnic cleansing of Rohingya people, killing untold numbers and forcing more than 626,000 to flee into neighboring Bangladesh.

Amid the barrage, other big stories struggled for a spotlight. A grinding civil war in Yemen pushed millions in the impoverished country to famine. A political crisis in Venezuela brought intensifying clashes. In Zimbabwe, Robert Mugabe was ousted from control after a 37-year reign. In Spain, a push for Catalonian independence degenerated at times into ugly scenes of mayhem.

In the U.S., Trump opened his presidency with a dark inaugural address beseeching an end to "American carnage" but saw much of his agenda rejected, with members of his own party providing key votes against him. Divides deepened, with agreement elusive even on core national values. Americans were sadder, a "happiness" report found. Sales of the dystopic novel "1984" surged and a chilling stage adaptation came to Broadway.

Mass protests formed around the country, including droves of women who proudly deemed themselves "nasty," a label placed on Hillary Clinton in the 2016 presidential race. When U.S. Sen. Elizabeth Warren was silenced through arcane legislative rules, the words of her colleague, Mitch McConnell, became an unlikely rallying cry of feminists: "Nevertheless, she persisted."

That phrase echoed as a dizzying number of sexual harassment or assault allegations emerged against high-profile men and as thousands of victims of lesser-known men chimed in with two words that made clear the scope of the problem: "Me too."

There were, in this arguably awful year, moments to hail, too, stories of heroism and bravery that restore faith and give the heart a little hope.

More than 80 schoolgirls, abducted by Boko Haram extremists more than three years ago in Nigeria, were released. In South Sudan, a boy abducted and forced into the army — mourned in a funeral two years ago after word of his gunshot death reached his mother — was alive after all, and returned home.

The Islamic State lost power as it was driven from Mosul, Iraq, and Raqqa, Syria. In the U.S., a total solar eclipse gave a break from the unending cacophony, with droves of sky-gazers standing shoulder to shoulder across a swath of the country.

A new calendar page brings with it the chance to start fresh. Jordi Casares, a 71-year-old retired bank employee in Barcelona, lamented the terrorism and radicalism that marred 2017 but said he, for one, is optimistic for a better 2018.

"It can't be any worse than this year," he said.

Associated Press writers Anita Snow in Phoenix, Joseph Wilson in Barcelona and Esther Htusan in Bangkok contributed to this report.