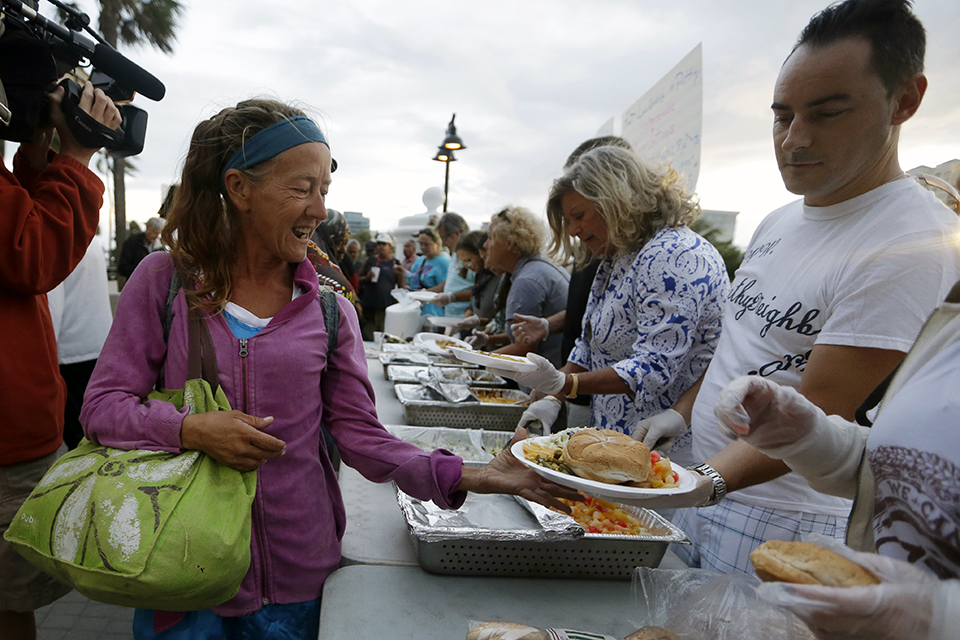 ATLANTA (AP) — When Adele MacLean joined others in an Atlanta park to feed the hungry the Sunday before Thanksgiving, she left with a citation and a summons to appear in court.

The case was dropped when she showed up in court earlier this month, but she and her lawyers say the citation for serving food without a permit was improper and demonstrates callousness toward the homeless. The city and some advocates say feeding people on the streets can hinder long-term solutions and raises sanitation concerns.

"I'm still outraged this is happening," MacLean said after her court appearance Dec. 14. "I'm concerned that the city, whenever they want to crack down on the homeless, they're going to go after anyone that tries to help them."

About 40 cities nationwide had active laws to restrict food sharing as of November 2014, and a few dozen more had attempted such restrictions, according to the National Coalition for the Homeless. Interim Director Megan Hustings said she doesn't have updated numbers but that she's heard about more cities considering such regulations.

MacLean, a volunteer with a movement called Food Not Bombs, was cited Nov. 19 by a Georgia State University police officer after her group refused to stop feeding the homeless in a downtown park, and her lawyers say city officers have been distributing a "misleading pamphlet" bearing the city seal that says a permit is required to feed people in public places.

Even though MacLean's case was dropped, it doesn't mean officers will stop telling people they can't feed the homeless, and doesn't eliminate the possibility of future citations, Weber said. The Southern Center is pushing for a clear statement from the city that people have a right to feed the homeless in public places, he said.

Conflict between city government and groups feeding the homeless in public isn't unique to Atlanta.

A Fort Lauderdale, Florida, ordinance requiring permits to feed the homeless in a park is being challenged in federal court by another Food Not Bombs group. The 11th U.S. Circuit Court of Appeals heard arguments in that case in August but has not ruled yet.

The lawyers in that case argue the ordinances violate the group's right to free speech because group members share food "as an expression of their political message that hunger and poverty can be ended if society's resources are redirected from the military and war."

"I salute genuinely the good will and good nature of all these people. There is no bad guy in this," said Georgia State University police Sgt. Joseph Corrigan, a chaplain who also leads the department's homeless outreach program.

But instead of having feedings that pop up in different places all the time, it's better to connect people with shelters or other established organizations that provide consistent help and services, he said.

Food safety, garbage and the human waste left behind when people are fed in a place with no bathrooms are also concerns, Corrigan said.

Additionally, many homeless people struggle with serious mental illness or addiction, which can make them wary of help, said George Chidi, social impact director for Central Atlanta Progress, a nonprofit community development organization that serves downtown Atlanta. The city has teams whose mission is to reach out, develop trusting relationships and, ultimately, connect the homeless with housing and treatment services. Public feedings can disrupt those efforts, Chidi said.

"We don't want anybody to stop feeding people," he said. "We just want it done in a way that's connected to social services providers ... and not on the street corner because we can't make sure those connections are being made in these street corner feedings."

"Food is a human right, and you don't force people to do what you want them to do by withholding food," she said.

Some avoid shelters because of strict rules, safety and health concerns or because they aren't able to be in the same place as family or friends, she said.

Hustings said restrictions on public feedings are most commonly enacted or enforced when the homeless population becomes more visible. In Atlanta, advocates say, more people have ended up on the streets after the recent closure of the city's shelter of last resort.

"Even though the rhetoric will be around providing access to safe food or something that purports to be considering the folks who are homeless and need the food, a lot of times our communities across the country know it's because citizens don't like seeing large gatherings of people who look homeless," Hustings said.