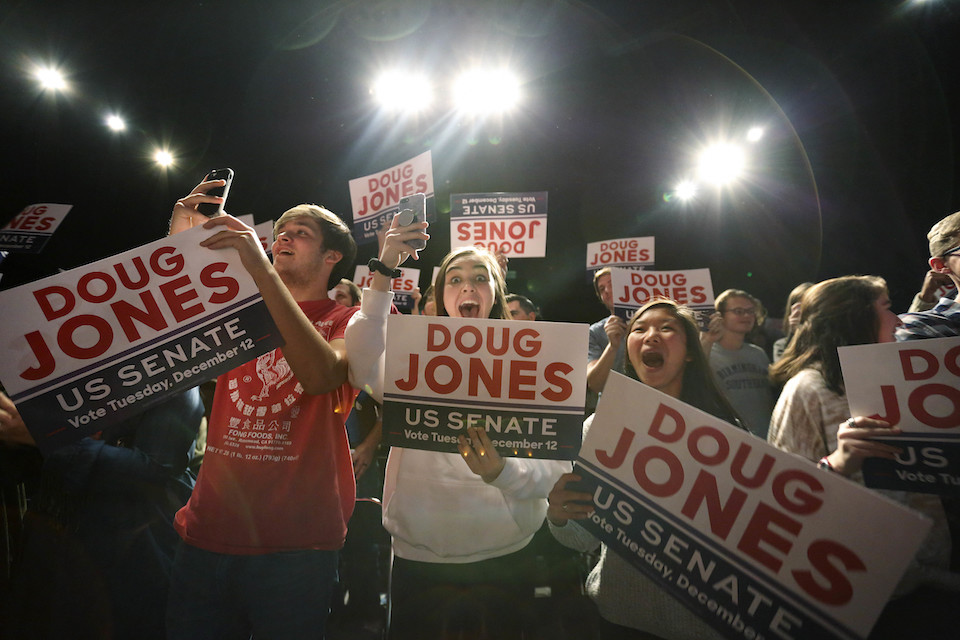 BIRMINGHAM, Ala. (AP) — Renegade Republican Roy Moore may be plagued by scandal, but scandal alone will not convince the voters of 44th Place North to show up for Democrat Doug Jones.

In a state where Democrats are used to losing, malaise hangs over this quiet African-American neighborhood in suburban Birmingham, even three days before Alabama's high-profile Senate contest. It is supposed to be a Democratic stronghold, yet the Jones campaign signs are hard to find.

"A lot of people don't vote because they think their vote don't count," Ebonique Jiles, 27, said after promising a Jones volunteer she would support the Democrat in Tuesday's election.

"I'll vote regardless of whether he wins or loses."

With history and math working against them in deep-red Alabama, Democrats fought Saturday to energize a winning coalition of African-Americans and moderate Republicans — a delicate balancing act on full display as Jones and his network of volunteers canvassed the state.

Moore, by contrast, held no public events, a familiar strategy as he bets big that the state's strong Republican leanings will carry him to the Senate, despite his shortcomings.

During an appearance near the staging ground for Selma's landmark "Bloody Sunday" civil rights march, Jones declared that Alabama has an opportunity to go "forward and not backward."

"This campaign has the wind at its back because we are bringing people together from all across this state," Jones said after a meeting at Brown Chapel A.M.E. Church. "The other side is trying to divide us more than they bring people together."

He was later joined by New Jersey Sen. Cory Booker, one of only two African-American Democrats in the Senate, who offered a warning to voters gathered at Alabama State University: "Bad people get elected when good people don't vote."

Saturday evening, Moore's camp organized two get-out-the-vote concerts expected to draw overwhelmingly white voters — including some open-minded Republicans — in a state that hasn't elected a Democrat to the Senate in more than a quarter century.

Moore got a big boost the night before in nearby Pensacola, Florida, where President Donald Trump encouraged voters to "get out and vote for Roy Moore."

The White House support comes even as the 70-year-old Moore faces multiple accusations of sexual misconduct, including allegations that he molested two teenage girls and pursued romantic relationships with several others while in his 30s. He has largely denied the allegations.

The explosive charges, which many Washington Republicans describe as credible, are giving Democrats a rare opportunity to pick up a Senate seat in the Deep South, where Republicans significantly outnumber Democrats.

Even if Jones wins on Tuesday, many Democrats expect the GOP to re-claim the seat when the term expires at the end of 2020.

Beneath Jones' biracial and bipartisan balancing act is a complex numbers game that has vexed Alabama Democrats for decades.

The party's core of black voters and white liberals — plus a smidgen of old-guard, more conservative "Southern Democrats" who've held on amid the region's partisan shift — is worth no more than 40 percent in statewide elections.

That's been true in high-turnout elections, with former President Barack Obama twice landing between 38 and 39 percent, and the most recent governor's race in 2014, when the Democratic nominee pulled just 36 percent.

African-Americans make up about 25 percent of eligible voters, though Democratic pollster Zac McCrary said Jones needs black voters to comprise 27 percent or more of those who show up at the polls on Tuesday.

Jones then needs to win one in three white voters in the state, which would require capturing about 15 percent of Republicans, McCrary said.

Ossoff aimed for an upset in the 6th Congressional District of Georgia, but ultimately came up short in Atlanta's Republican-leaning northern suburbs.

"The only way you win in these kinds of districts and states is a coalition that is obviously very hard to put together," Pontoni said. "You're going after voters who think and vote very differently."

Much like Jones, Ossoff used an extensive, data-driven ground game to maximize Democratic support, while using television advertising to strike a moderate, non-partisan tone. Ossoff didn't have a controversial opponent like Moore, but he ran against Washington dysfunction as a way to reach moderates.

On the ground in Alabama on Saturday, Jones dispatched hundreds of volunteers across the state to knock on doors to identify likely supporters in neighborhoods that featured high concentrations of African-Americans and Republicans who supported Moore's GOP primary opponent, current Sen. Luther Strange.

"Roy Moore will not win if people turn out to vote," Ellis said.

Many voters on the list provided by the campaign didn't answer their doors Saturday morning. Those who did suggested they would support Jones, even if they didn't know him well.

Oweda Clark, who lives just around the corner from 44th Place North, admits it's hard being a Democrat in Alabama. But she told Ellis that she plans to vote for Jones anyway.

This story has been corrected to say that there are two African-American Democrats in the Senate.